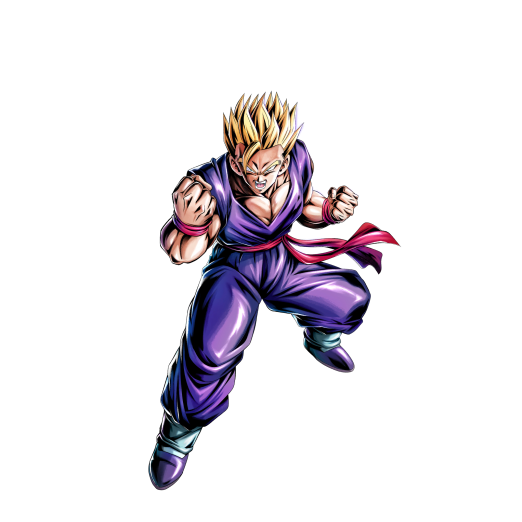 This Gohan variant comes from the Broly – Second Coming film and acts as a fantastic Defensive Fighter on Hybrid Saiyan and Son Family Teams. SP SSJ Teen Gohan BLU's incredible Strike Attack is dependent on Son Family Allies being present, but he can excel even without them.

He has a constantly evolving toolkit. When one or two allies are alive, he possesses a powerful Cover, but what’s interesting about his variation of Cover he’s the last one alive, he trades it in for additional Damage Inflicted, giving him consistent relevance according to the game state.

Most notably, he brings along his iconic Family Kamehameha Ultimate Move, dealing massive Damage and a wealth of incredible Support effects.

SP SSJ Teen Gohan BLU has some of the highest Health and Defense stats in the entire game, and his toolkit goes a long way in showcasing just how hard he is to kill.

Son Family and Hybrid Saiyan Teams that use Gohan are able to rely on his Sustained Damage Cut effect to protect important Yellow Fighters. This Cover begins as a +40% Sustained Damage Cut, and when one ally falls, it becomes +60%, allowing Gohan to check enemy Ultimate Arts and Rising Rushes.

His base Strike Attack stat is already very high and gets even better depending on the Son Family Fighters he’s paired with. A if Goku variant dies in combat, Gohan's already strong Strike Attack is increased by 45%.

The Hybrid Saiyan Tag's Support Fighters can increase his Damage even more, turning him into an all-purpose Offensive and Defensive pivot

SP SSJ Teen Gohan BLU's ace in the hole is his absurd Main Ability, which is and has always been one of the strongest collections of effects in the Meta.

It Heals Gohan's entire party - with its efficacy depending on the number of downed Allies - and draws the Family Kamehameha, a Massive-damage Ultimate Arts Card that reduces the whole party's Substitution Counts by 10 upon activation, granting an incredible tempo boost to the Team.

This amazing effect bundle gives Gohan absurd mid-game utility, as its activation at that point has the potential to turn around a losing match.

SP SSJ Teen Gohan BLU's Blast attack is utterly laughable, and none of his personal Damage Buffs increase it.

This results in a Fighter with limited Team applications, as his Strike Damage is reliant on Gohan being fielded alongside Son Family Fighters, and Blast-oriented Fighters adding Blast Cards to Gohan's deck reduces his overall Damage.

His Z-Ability only Buffs Strike Defense for Son Family, which includes Hybrid Saiyans, at 5 stars. While not the worst thing in the world, many Fighters possess Z-Abilities that Buff two stats at once. SP SSJ Teen Gohan BLU didn’t get this luxury.

SP SSJ Teen Gohan BLU’s Zenkai has now made him viable on the Son Family team due to the team being very similar to Hybrid Saiyans and Gohan works here for the same reasons as he does for Hybrid Saiyans.

SP SSJ Teen Gohan BLU is a very good BLU Fighter for the Hybrid-Saiyan team that can act as their tank. He has competition with SP SSJ2 Trunks BLU as the main BLU Fighter but Gohan offers defense while Trunks offers more offense which, frankly, Hybrid Saiyans don’t need.

A Strike-oriented setup with LL SP Future Gohan YEL and LL SP SSJ Youth Gohan PUR can prove devastating to many top meta teams with the team heals, support, and Damage that this team can output.

A perfect choice for the Defense and Ultimate Move Damage. A Base Health roll is optimal here.

This Equipment greatly boosts Gohan's Offense when paired with other Hybrids. However, it can be argued to build a full Defensive Build and a 3rd HP Equipment, such as I'll give it my best! OR a Pure Defense Equip such as Dad..?

True to the nature of most Gohan variants, SP SSJ Teen Gohan BLU is incredibly resilient and doesn’t go down without a fight. His Cover only gets stronger if someone on his Team is defeated, and he trades his Cover Ability in for Damage inflicted when he’s the last one alive.

He slots into one of the best teams in the game in Hybrid Saiyans as their stat-beast of a tank. Zenkai SSJ2 Trunks is a good Hybrid choice as well due to his hellacious Offense, but there's really no wrong answer here.