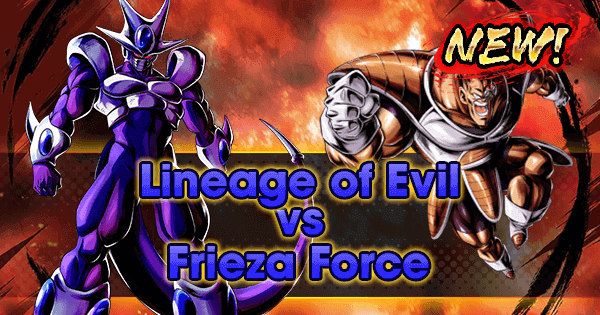 “Civil War” would be the most fitting way to describe a rivalry between Frieza Force and Lineage of Evil. In fact, these Tags share many things with one another, but also have some differences that make them different in practice.

There isn’t an historical rivalry between these two Tags, since for the most part Lineage of Evil has generally been the clear-cut strongest between the two, since while Frieza Force was limited to effectively being a weaker version of the Frieza race - based Tag.

The past few updates have radically changed this state of things. In fact, Frieza Force has gotten a lot of new --freely obtainable-- additions, that not only differentiated its playstyle from Lineage of Evil’s, but also made it a direct competitor, to the point that deciding which between the two is stronger than the other is arguable.

An important thing to note is that Lineage of Evil objectively has more resources than Frieza Force. In fact, SP Coora PUR is a very impactful Fighter, that gives Lineage of Evil a Defensive edge. Frieza Force can boast his Ginyu Force lineup, but it’s not as relevant as it was some months ago. Does this mean Lineage of Evil is the decisive winner? Let’s see.

Whether Lineage of Evil goes in with an Ultra-Offensive Core –thus, SP FF Coora BLU on the field – or not, Frieza Force has to play very cautiously. Losing SP FP Frieza YEL with SP Coora PUR still alive on the other side would be a death sentence, and considering SP FF Frieza RED is a common Fighter as well, that has chances of happening.

For these reasons, Frieza Force’s best chance might be to bulk up by replacing SP Golden Frieza GRN with EX Reecome BLU on the field, thus by replacing a constant matchup disadvantage with a Fighter that will allow the Team to stall – and he also synergizes well with SP FF Frieza RED--.

Still, Lineage of Evil is better both Defensively and Offensively. To put things in perspective, Frieza Force’s essential Fighters are only secondary to SP Coora PUR on Lineage of Evil.

Overall, Lineage of Evil has the means to control the matchup both in early and late game thanks to better Effectiveness and toolkits’ synergy.

At this point in time, Frieza Force looks like a worse version of Lineage of Evil. While this fact doesn’t make the matchup unwinnable for the former, it means the latter has a clear edge.

Lastly, looking at the whole Meta scene, both these Teams rank very highly, since they matchup well against most other Teams, but Lineage of Evil is better at that too for the same reasons that make it win this matchup.