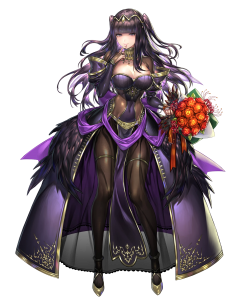 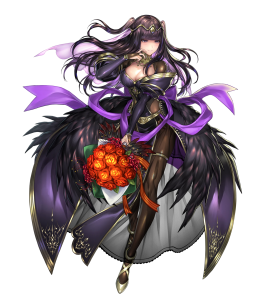 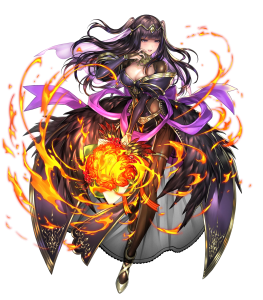 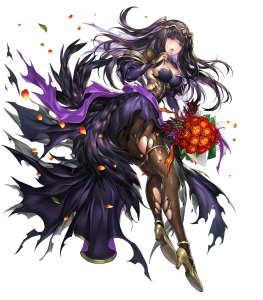 In her quest to tie the knot with her destined one (and slaughter a few chickens on the way, why not), Tharja ditches her "normal" outfit in favor of a wedding gown—if you could call it that. Eerily like her original self, Bridal Tharja is a red mage infantry unit that highly favors her Attack and Speed over other stats, giving her a clear role as a fast glass cannon fighter. Additionally, the Obsessive Bride's well-aged offensive statline of 35/35 helps keep her fresh and smashing in line with her competition. This is especially helped by her access to great offensive tools in her unique tome Múspell Fireposy and, alternatively, the basic but ever-exceptional Rauðrblade.

As a glass cannon, the usual drawbacks of below-average bulk is obvious but completely expected. What truly stops Bridal Tharja from cake-cutting her way to the top would be her competition. In particular, it is easy to compare her to her original self: her Obsessive Bride form has similar stats but slightly superior offensive stats, but her Dark Shadow variant poses solid advantages in easier accessibility and merges. Her original self's new unique weapon, Tharja's Hex, also technically humbles Bridal Tharja's Rauðrblade build due to a lack of cooldown delay as well as handy in-combat debuffs.  This speaks nothing of other red mage units such as Lilina and Celica, whom can leave Bridal Tharja's own achievements in the shadows thanks to their own perks and more frequent accessibility/usage across most game content.

Though her seasonal availability is an inconvenience and maintaining Múspell Fireposy's ally nearness requirement can be a hassle, Bridal Tharja is still a strong pick that can especially thrive in ally-concentrated contexts.

Bridal Tharja's base 35 Attack and 35 Speed achieve an ideal offensive balance without sacrificing one or the other—a typical problem with some fellow mage units such as Lilina and SM Eirika. With even casual investment, Tharja's offensive game will likely not disappoint, especially as a large number of threats are not particularly Resistance-heavy.

Bridal Tharja's unique base weapon already provides much of the power she needs to succeed; she doesn't necessarily need to transition to another weapon at all like other competitors. In addition to providing a much-appreciated Speed boost, Múspell Fireposy promotes closeness to allies. In practice, this gives Tharja boosts through the weapon itself, while encouraging her to bask in additional teammate-provided support skills such as Drive, Spur, and Joint Hone skills.

Bridal Tharja's defensive stats are not great; not counting Flaws, her total bulk amounts to only 60 in both physical and magical matchups. This limits the amount of punishment—and potential round kills—she can actively survive.

As a seasonal unit, Bridal Tharja is limited to a single specific seasonal banner per year. While having her may be compelling for some, there are plenty of red mage units with far better availability and competitive advantages of their own, especially her non-seasonal self. As a result of limited accessibility, Bridal Tharja is also potentially susceptible to power creep, which may make her appear a seemingly extraneous choice compared to recently-added units and weapon refinery options.

+ Spd, 3 merges currently.
Main plan to have her as a support unit for arena, once I get her to max merges.
Dual rally for scoring + Support.
Feint skills to debuff, can replace Spd Feint with a ruse of choice.

Tharja: Obsessive Bride becomes Tharja: Obsessive-Compulsive Bride! She WILL have the best Atk & Spd on the battlefield and heaven help anyone who gets in her way. Also, they must be equal because obsessive-compulsive. This build is mostly silly, very expensive, and frighteningly effective. Ideally you'll have a 71/57 offensive spread while applying -5/-5 to the opponent's Atk/Spd.

The weapon and A slot are tied together:
Muspell Fireposy's effect is basically Atk/Spd Form 3 so it's a natural fit in the A slot to give +4 Atk/Spd for each ally within 2 spaces. Also, the +3 Spd balances the +3 Atk asset so they remain equal.

Atk/Spd Bond seal works from the positioning needed for Fireposy and Atk/Spd Form so it's just icing on the wedding cake.

Sadly, there is no special that plays into both Atk and Spd so we have to use Glimmer.

Bog standard blade tome build, albeit ruptured sky for the special instead of glimmer but can not add that for some reason.

Preferred IV is +spd and -hp, or just +spd if merged.

The rest is self explanatory.

A somewhat unconventional build, my +1 B!Tharja has been sitting my barracks for a while. This build is alright, it gives me an excuse to use one of my favorite characters from Awakening.

On a side note, I personally think that the Prf Weapon base Tharja has is much better. Perhaps IS will allow seasonals to inherit the base characters Prf Weapons some day, and vice-versa.

(Brazen Atk/Res Seal is not shown for some reason...)