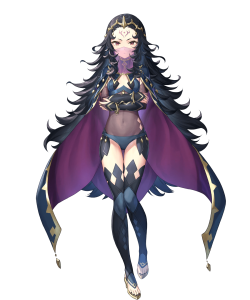 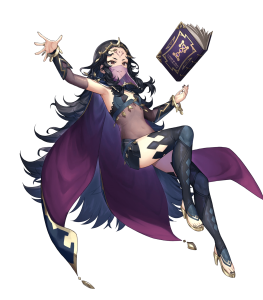 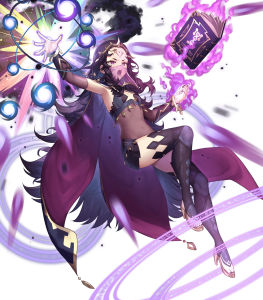 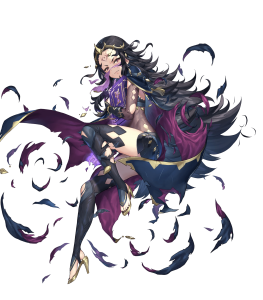 Waiting for something to happen? (Aether Raids Defense)

Nyx’s 42 Attack and 40 Speed land her in the game’s top echelon of offenses, making her a damage-dealing powerhouse.

What was originally somewhat of a pushover weapon in Fates is now Nyx’s incredibly powerful personal weapon in Heroes.

The combination of gaining +6 Attack, +9 Speed, damage reduction, and increased damage based on that damage reduction makes Nyx an incredibly potent offensive and sometimes even defensive force. She can almost always survive at least one combat as long as she initiates, making her one of the most consistent units for both PvE and Aether Raids purposes; for the latter, she can frequently tank and deal good damage to (if not KO) some of the strongest superunits and Far Save tanks including Legendary Ryoma, Mareeta, Female Kris, New Year's Alfonse, Guinivere, and Far Save Armored units such as Brave Hector, Valentine’s Faye, and Plegian Raphael. If necessary, Nyx also has the flexibility to use her IVs and/or A and/or Sacred Seal slots to increase her defenses to avoid being OHKO’d by enemies when they activate their Specials.

Access to Skills such as Impact Skills, Null Follow-Up, Special Spiral, Null C-Disrupt, and Time's Pulse ensures that Nyx will be able to fulfill whatever role players wish for her to fulfill with extreme efficiency.

May struggle with multiple combats

While the combination of Ginnungagap and Null Follow-Up practically ensures that Nyx will survive at least her first initiation, she may struggle to survive subsequent combats even with Ginnungagap’s damage reduction due to her incredibly low physical bulk and shaky magical bulk.

However, it is worth mentioning that sometimes, one initiation is all Nyx needs to make major contributions to her team, whether it be through KOing an enemy, inflicting status effects with Skills such as Fatal Smoke and Panic Smoke, and/or falling to ≤ 50% HP for allies with Wings of Mercy to teleport adjacent to her.

Because Ginnungagap only reduces damage from the enemy’s first attack, dual-phase Brave Weapon users such as Altina, Winter Altina, and Laslow can quickly put Nyx out of commission.