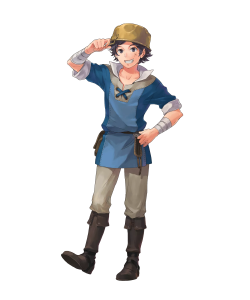 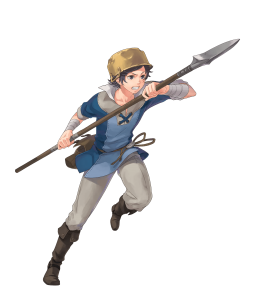 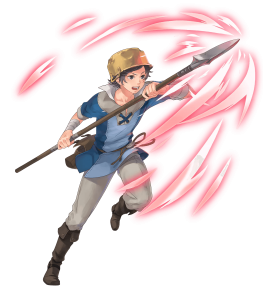 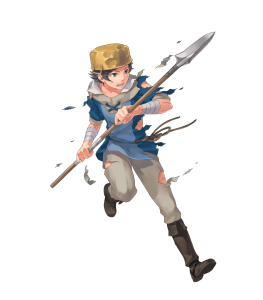 Donnel's statline distribution allows for a variety of builds, meaning the IV diagram above doesn't exactly reflect how flexible his Assets are. For low investment purposes, however, players will likely be wanting an Attack asset over others, cutting his Resistance or Speed in return.

Passive B: Drag Back

Outstanding in His Field (Breath Build)

Part of Donnel's perceived mundaneness stems from him being part of the Hero Battle rotation (meaning two neutral copies are available for everybody) and his—often annoyingly enough—status as a common 3-4 star rarity pull. This comes into Donnel's favor, however, as players will very likely have an optimal Asset copy of him for the build they need and come across more than enough duplicates to perform a high-investment project whenever the need surfaces.

Donnel's base stat total of 162 allows for a bit more room to optimally allocate stats, and the Village Hero does this task with reasonable success. His base 35 Attack allows for consistently good damage output across most build he runs, while 43 HP and 32 Defense make him not-too-shabby in the physical tanking department. While his remaining Resistance and Speed sit at odd and objectively average values, they are satisfactory enough so that superinvestment in these particular stats is always a worthy venture with the right skills.

Donnel's access to infantry-locked skills such as Null C-Disrupt, Wrath, Special Spiral, Breath skills, and more is one of his main draws and differentiates him from similarly-built units in other movement types.

Donnel's flexible stats and usage of lances grant him a great assortment of alternative weapons to use besides his offensively handy Hewn Lance, an already outstanding Brave-style weapon with an Impact effect built-in. Standouts include Slaying Lance, Berkut's Lance (power to the people!), and—coveted especially from lance units for Aether Raids in particular—Casa Blanca and Gilt Fork. Donnel being a lance user also allows him to benefit from refined Geirskögul, which mostly fixes Special cooldown and inheritance issues related to his usage of Breath skills.

Donnel's Resistance starts out at an exploitable value of 23 to begin with, and minimal interference in this stat leaves him vulnerable to strong magic assaults. Donnel's Speed also sits at a pretty average default value and requires fair investment to break his vulnerability to natural follow-up attacks.

This is an issue that's honestly universal to most first generation units, but this applies mostly to Donnel's roles outside of blitzing with Hewn Lance. To address some of his stat weaknesses—especially in Resistance and/or Speed if Donnel hopes to tank as much as he can— expensive skills and superinvestment is necessary which may leave other areas in the dust. Even then, Donnel may have difficulty taking repeated punishment from the likes of Ophelia, Thrasir, Yune, and Legendary Julia, and his Speed might be compromised against more recent unit entries also specializing in this stat.

Whether this is seen as a flaw or not depends on the person as Donnel's current stat distribution arguably contributes to his flexibility. Regardless, Donnel not particularly specializing in certain stats can make other competitors in the 3-4 star rarity pool seem like more compelling choices for certain roles.

Donnel already has a very serviceable 36 def, so why not add on a disgusting amount of extra defense to that? That's the idea behind this build. With easily obtainable skills save Atk/Def Link 3, this set both drives Donny's defense up to disgusting levels while still providing defense support every turn to the allies who are, optimally, repositioning him in front of them to take a hit. If you're able to get a steady breath or steady stance 4 on him though, feel free.
P.S. the stats listed above are for +1 merge.
I didn't check what they were at +0 lol

This build is a Mixed Tank build so Donnel can tank Mages and Physical Attackers. It is build for Enemy Phase and very much not optimal for Player Phase.
Berkut's Lance+ (Def Refine): Berkut's Lance offers a +7 Resistance boost when the enemy initiates combat. The Defense Refine is optimal to increase Donnel's physical bulk.
Swap: It can be replaced with anything that you choose, Reposition, Shove, Rally, and etc.
Moonbow: Combined with Warding Breath helps it activate faster. Can be replaced with any special you desire, but Moonbow is for optimal damage output.
Warding Breath: Combined with Berkut's Lance it gives a whopping +11 Resistance during enemy phase, which will Help Donnel tank his Mages. It also offers +1 Special Cooldown per attack, and can be replaced with anything you desire because QR3 combined with his low speed makes almost all specials able to activate in that combat.
Quick Riposte 3: Due to Donnel's low speed, he cannot make follow ups on most units, so QR3 is optimal so he can make a guaranteed follow ups and be able to increase damage output.
Infantry Pulse: With Donnel's high HP he can run Infantry Pulse easily with an amazing 44 Base HP. Combined with the Berkut's Lance+ (Def Refine) can be increased to 49 easily.
Panic Ploy: With Donnel's high HP Pool, he can run a Panic Ploy easily and disrupt enemies' Bonuses.

This build focuses on being a One-Turn Nuker, allowing Donney to take a hit or two from any blue or red unit, and even some green physical fighters. Once Fury triggers and Moonbow has been charged, Wrath ups the damage done, allowing for a two hit combo that can tear through most units. With Brave Lance+, he can quad most armors, which means he will always hit with at least 1 Moonbow, at most 2. He struggles against most mages with this build, however, but if he does manage to survive they will most likely be dead next turn.

I did this for a friend who loves Donnel like a son. I also did this because of a dumb pity breaker Sumia and a few thousand feathers just lying around. Reprisal+Steady Stance+QR makes him a pretty dang potent EP unit, and the double Drives are there to further buff anyone else who considers him a friend.

The easy way to build ol Donnie is to make use of his decent Atk and go for a standard Brave Lance+ build. This Donnel build makes use of his res superboon to make him into a decent mixed tank. Though he won't be able to counter attack at a distance (Making Reinhardt a bit scary) He'll have a 38/38 defensive line when being attacked. which, added to his rather generous health pool, will make him quite hard to kill. And since Donnel is an easy to summon unit, making him a plus 10 will be easier than a lot of units. 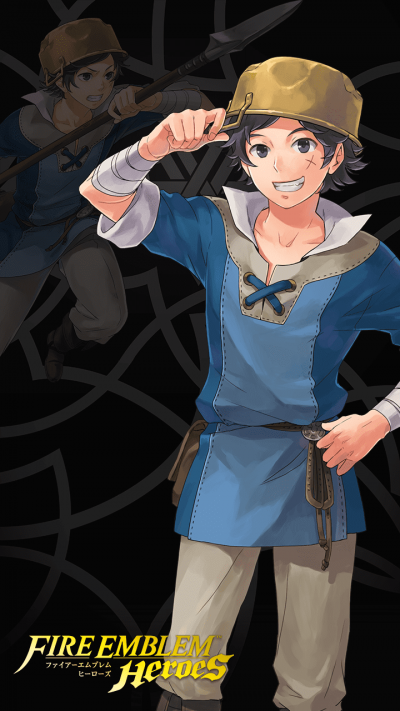