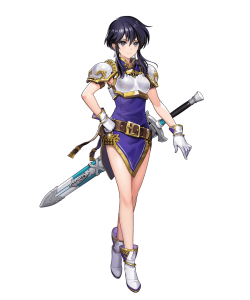 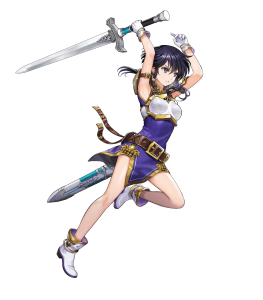 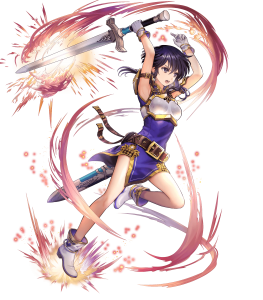 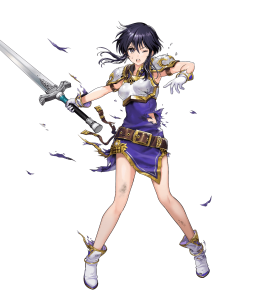 In Remembrance of Her (General Offense / Galeforce)

Despite Larcei’s statline primarily focusing on her offenses, her physical bulk is quite respectable as well, sitting at 70 thanks to her 41 HP and 30 Defense. She will very often survive at least 1 physical attack, which can easily become multiple to many with damage reduction from skills such as Spurn and healing Specials such as Noontime, Sol, and Aether.

Unsurprisingly, Larcei’s Edge is Larcei’s personal weapon, and quite a strong one.

Larcei can augment her consistency and combat performance thanks to access to skills such as Spurn, Close Call, Repel, Null Follow-Up, Null C-Disrupt, Lull Spd/Def, and Time’s Pulse. Infantry-effective and Sword-effective weapons are very sparse as well, meaning Larcei rarely has to concern herself with taking effective damage.

The combination of all of the above strengths allows Larcei to be a very flexible unit that can perform well in any mode.

In classic Infantry Sword fashion, Larcei sacrifices magical bulk for the rest of her stats, sitting at an unimpressive 65. While damage reduction from skills like Spurn will help patch this, she is still prone to getting overwhelmed by multiple magical enemies.

The Infantry Sword unit pool has always been and still is incredibly bloated, meaning Infantry Swords need to be particularly strong in their roles or offer something unique to the team. While Larcei is undoubtedly a strong unit, she unfortunately can fall a bit short in comparison to competition such as Ayra (ironically), Mareeta, Byleth (M), Byleth (F), Kris (M), Fallen Ike, Winter Altina, and Young/Duo Eirika.

Reduces sol cooldown 1 w/ times pulse + accelerate special trigger to make it as effective when on enemy phase as noontime.

Phantom spd helps her weapon effect stay competitive with the other fast characters of the game.

Larcei is Gen 4 Ayra with more stats, runs the same set as her but she comes with a legendary slaying weapon, so you don't need to invest in giving her slaying edge.

Best possible build for Larcei in my opinion if you properly buff her defenses. If paired with the likes of Legendary Azura & Legendary Eliwood her total in combat defenses can climb to 47/45. Combined with the repel skill, and Larcei’s amazing speed almost always limiting their enemy to one hit, she gainsamsxing mixed defenses as that single hit is reduced to very little damage, which, after being applied, will activate noontime due to its 1 point activation. No Times battle timing will almost always allow Larcei to immediately recover every piece of damage she takes if she always remains on the enemy phase.

I don't usually make builds but Gamepress was drunk. Why would you ever swap out Regnal Astra? And did they forget Time's pulse exists?

She has so much speed and attack during combat that Repel&#039;s extra effect never comes into play, close call works out much better and works well with more teams total, now if taking on large tanks or units of opposing color, Repel comes to seem more useful but overall the damage reduction on both of them is always helpful as it scales off of her incredible speed.

Other than that her base kit is so good nothing other than a preferred movement skill is needed. Since her weapon reduces her cool down to 1 skills like Heavy or Flashing Blade are relatively useless unless fighting effects such as Guard so unless one would want to increase offensive stats with a seal such as Swift Sparrow I find Quickened Pulse the most useful for a turn 1 special ready and a potential 2 specials per combat.