Should You Pull - Greil's Devoted Edition 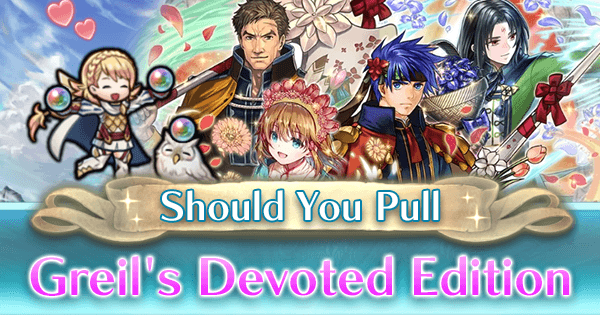 This is a 4 unit banner, meaning that the odds start at 3% and the odds for individual units is worse than 3 or 2 units banners. There are no colorless focus units, and there are two green focus units, which vastly increases your odds of pulling a 5 star if you select a green orb.

Greil finds himself joining the likes of Surtr, Winter Chrom, and Hector in the land of slow, green armors. While his Attack and Defense stats are both extremely high, it’s nothing that really takes us by surprise, considering his competition.

In units overall, Greil is tied with Surtr for the highest combined Attack and Defense stats at 79- with Halloween Dorcas, Halloween Myrrh and Legendary Hector trailing just behind them with a combined Atk/Def stat total of 78.

Compared with the free Halloween Dorcas

Compared with the 5 star Surtr

More Of The Same

Despite Greil’s base kit not quite working in tandem, he’s a fantastic unit with sky-high Attack and Defense stats who will surely be a boon to any team, particularly if surrounded by other armor units who he can enable with Armor March.

That being said, he’s not exactly a unique unit, and even the new things he brings to the table- Fury 4 and the Faithful Axe- aren’t going to be massive in terms of shaking up the meta. There are plenty of green armors who can fulfill a similar role to him, and many of them have more lethal prf weapons or skills to do it with.

Soren’s infantry form has long-since been held back by his mediocre Speed stat of 33 and unfortunately, his cavalry form fares no better in that department. While his Attack is the highest among blue cavalry mages at 35 and he does have the highest combined Attack and Speed compared to others of his unit type and class, it pales in comparison to some of the heavy hitters we’ve seen recently- not to mention the tried-and-true Reinhardt, who still dominates the blue mage slot in most cavalry reams.

Compared with the free Ursula

Compared with the 4 star L'Arachel

Compared with the 5 star Spring Catria

We Can Do It Together

Like Hostile Springs Elise before him, Soren is all about buffing his allies and himself by proxy, a trait which is relevant in every skill slot he has. Everything he does revolves around positioning and utilizing his Assist to debuff his opponent while strongly buffing his allies. When next to an ally, he gains a whopping Atk/Res +8 and Spd/Def +3, while also able to grant his allies Atk/Spd/Res+6 and debuffing an opponent with Spd-7.

All of this seems extremely useful in a support kit, but as an offensive unit himself, Soren will underperform when compared to his blue cavalry allies, despite his generally-better offensive stats. This is due to the strict positioning he requires to make his self-buffs work, which limits his cavalry mobility and his flexibility to attack during Player Phase. It’s likely that his best tactic will be to buff his allies using his Rally in Player Phase and then bait a magic-wielding opponent during Enemy Phase, when he’s sure to have an ally next to him.

If you want to use him as a more offensive unit then he’ll likely need an overhaul to his base kit so that he can perform more independently on the field, meaning that he requires some significant investment to perform up to par with his stats.

Compared with the 3 star Cecilia

Compared with the 5 star Gunnthra

Compared with the 5 star WT Olwen

Unlike Soren, Mist doesn’t face stiff competition for her color slot. Her stats are generally the best-in-class for a green tome cavalry unit and she has the A slot skill to make them count. Like Soren, her native weapon, the Gronnblooms, is slightly awkward for her to use and she may want to consider swapping her weapon out for the tried-and-true Gronnblade.

Otherwise, keeping with the theme of the rest of the banner, there’s nothing particularly interesting about her skills, and though her stats are very good, it’s only marginally better than the runner-up (for comparison, a Gronnblade Mist will have 3 more Attack and 1 less Speed than WT Olwen with a -1 to her Special Cooldown- whether or not that’s worth the tradeoff is up to you).

Ike is incredibly fast at 38 Speed and also has a very high Attack at 37, for the highest combined Attack/Speed in the game. He’s not even lacking in the Defense department either- with 35, Ike can definitely hold his own. His only glaring weakness is his low Resistance at 19.

Compared with the 3 star Draug

Compared with the 5 star Zelgius

Valentine Ike has easily the best statline for an armored sword thusfar, beating out even Zelgius- however, he suffers from his lack of a prf weapon, which cuts into both his damage potential and his utility, as he has to run Distant Counter in his A slot if he wants the same effect.

Still, he’s incredibly powerful, as one of only two units in the game capable of using Radiant Aether (the other, of course, being Legendary Ike), a 4 charge cooldown Aether instead of the normal 5. Because he’s also an armored unit, this makes Valentine Ike a formidable powerhouse, as he now has far more options for cooldown reduction which allows him to regularly activate his lethal Special.