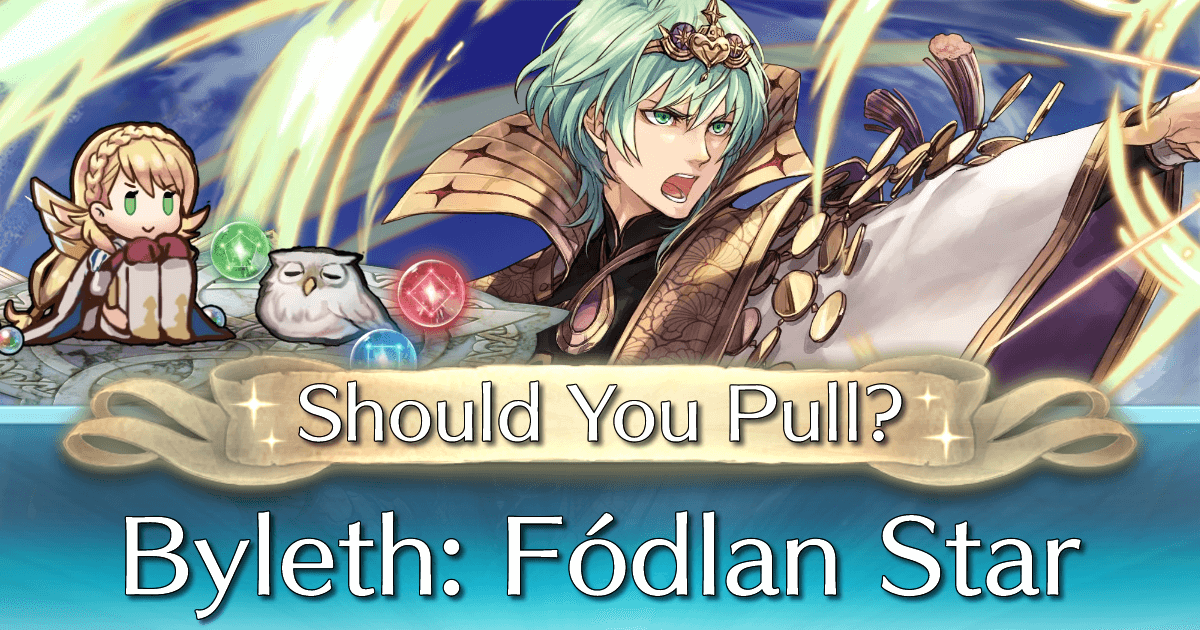 Completing the quartet of Legendary Three Houses Lords, Legendary Byleth is here. He may not be the hero we deserve, but he’s definitely the one we need right now, and he’s here to smash the meta and save us from Fallen Edelgard. My prayers are answered, brother. But is he worth pulling for?

Byleth competes with and faces seven other Water Legendary Heroes: Fjorm, Ryoma, Eirika, Azura, Leif, Chrom, and Dimitri. With the skills from his base kit alone, he has a great matchup against most of them, KOing Chrom, Dimitri, Leif, Azura, and more variably some of the others with a charged Sublime Heaven. Even a neutral unmerged Byleth easily KOs other common Arena threats such as +10 Fallen Edelgard, +10 Legendary Claude with Fallen Star active, and 2HKOs +10 Legendary Sigurd - Sublime Heaven is just that powerful, particularly in its ability to ignore non-Special based damage reduction. Due to Professorial Text, specifically the part of its effect which is essentially Drive Null Follow-Up, he also has solid potential as a support unit, which could be useful for other units on his Arena team, or in many other contexts.

In terms of scoring potential, Byleth is equivalent to Chrom or Dimitri at equal merges (they have 5 less BST in their Legendary Duel effect, 180 compared to Byleth’s 185, but extra scoring in SP from unique skills compared to the highest scoring inheritable skills in those slots - To Change Fate! and Atrocity, respectively). Byleth exceeds the other Water legendaries in potential score. Also, since he’s green, the average orb cost to pull a copy of him is slightly lower than units of the other three colors, by about 10%. This may result in a less frustrating summoning experience overall - but of course, like with everything involving summoning, individual results can and will vary wildly.

Of course, for most players, using a Legendary Hero for Arena scoring is not worthwhile compared to units the player might have at +10, unless that Legendary is merged to approximately +4 or higher, and their Element (Water in this case) is in season. More specifically: one copy of Byleth will not provide an edge in Arena scoring, in most cases. You will need to obtain roughly 5, and merge them, to start seeing much of an impact outside of his bonus seasons. But even at +0, he can be a useful unit in other contexts.

The first and foremost is that he is basically a perfect Fallen Edelgard counter right out of the box. Sublime Heaven deals massive damage to her in all cases, often KOing if she is not receiving significant extra stats from an external source (such as a Mythic blessing on an Aether Raids team). Replacing Byleth’s B slot with Windsweep allows him to safely initiate on Edelgard, and many other physical units, without fear of counterattack, allowing him to easily KO her over multiple combats if one combat is not enough. And due to his Professorial Text, the follow-up denying drawback of Windsweep is nullified so long as he initiates combat and is faster than his foe.

In addition to this, Professorial Text has a never-before-seen ability in Fire Emblem Heroes: allies within 2 spaces gain the benefits of Null Follow-Up, neutralizing any effects that prevent their follow-up attack or guarantee their foe’s, if their Spd is higher than their foe’s during combat. This has a wide range of potential applications in many different modes, and means that even at +0 Byleth could be a highly useful support unit for fast units that do not have access to Null Follow-Up, or wish to combine it with another B slot such as Spurn. This could include units like Hel and Nótt, both of whom are quite fast and available on this banner, as well as many others.

Byleth is of course not the only unit on the banner - there are 11 others spread across the four colors.

On red, we have Plumeria, Lif, and Annand. Plumeria has great value as an Astra Mythic, since she provides a useful Spd boost as well as a unique variant of Dance, Sweet Dreams, that buffs the target ally and can debuff a nearby enemy. Even one copy of her can be a great asset for Astra Raiding Parties, due to how useful dancers are on almost every kind of team. Lif is generally mediocre as an Anima Mythic, but he does still reduce lift loss by an extra 20 in seasons where he is a bonus unit, and he has some useful fodder in Distant Counter and Time’s Pulse if he is not needed as a unit. Annand is a fast Sword flier with decent Atk, which there are many of, but she has multiple useful skills including Unbound Blade+, Sturdy Impact, and Guard Bearing. This is potentially a great color if you need any of those skills for inheritance, or Plumeria for Astra offense.

On blue, we have Nótt, Legendary Julia, and Erinys. Nótt is a fantastic Dark Mythic, largely on the strength of the Pathfinder effect in her weapon, but also because she is currently the only Dark Mythic that provides access to the 7th unit slot. If you care about making a strong Dark defense, it is absolutely worth having at least one copy of her - however, the guaranteed five star after 40 summons on her debut banner was a much more reliable way to get her. If you missed out on that opportunity, or need another Nótt, this is another chance. She also has some rare and potentially valuable skills including Distant Counter and Atk/Spd Menace. Julia is a solid Earth Legendary Hero with decent but not amazing fodder in Mirror Impact and Atk/Res Oath. Erinys is one of many fast Lance fliers, so she faces significant competition for relevance, but she does have a great unique weapon and several great fodder skills in Harsh Command+, B Duel Flying 4, and Atk/Def Rein. This color is decent, but probably not incredible unless you need one of the units for some particular reason.

On green, in addition to Byleth, we have Dagr and Hel. Dagr is currently the only slot-boosting Light Mythic, which can be a big asset to Light Raiding Parties. She could be worth picking up for that alone, especially considering the reliability of Light and Astra Mythics as bonus units, and also has solid combat, boosts the Res of Light-blessed units, and has some solid inheritable skills including Atk/Spd Push 4 and Even Tempest. Hel is a mediocre option as a Dark Mythic, since she is generally not very threatening and severely hurt by Bolt Tower, and while she does also boost Def of Dark-blessed units, Nott does the same while providing more powerful unique effects. However, Hel still reduces lift loss by an extra 20 when she's a bonus unit, and can still be solid on the right team, being very difficult to KO with Hel’s Reaper. She also has useful skills like Distant Counter and Guard Bearing that other units might want.

On colorless, we have the trio of Bramimond, Legendary Leif, and Legendary Alm. Bramimond is a solid Dark Mythic that has become somewhat worse recently due to the prominence of armors with Save skills and defense teams that force engagement on turn 1. Atk/Def Push 4 and Lull Atk/Res are solid skills that could be useful, but are rarely extremely desired inheritance. Leif is a great Water Legendary for Arena, and potentially very useful in other modes as well, as he is the only ranged Cavalry unit that can act again by activating a Special, Njorun’s Zeal. His skill inheritance is generally not worth mentioning, with really only Atk/Res Push 4 to offer. Legendary Alm is also a solid pick for an Earth Legendary, and has the mediocre Darting Blow 4 and much more relevant Null Follow-Up to offer as inheritance. This color has units that are solid on their own and potentially great in the right context, but is generally the weakest when it comes to skill inheritance.

Overall, green is probably the most valuable for the average player, with the weakest link being either Dagr or Hel depending on your needs; Dagr has great utility as a Light Mythic, while Hel has potentially great skill inheritance if you need Distant Counter or Guard Bearing. Red is probably the second best, with one of the best Astra Mythics, Plumeria, who is very useful even unmerged, and two other units that have some great skills even if you don’t need them for anything in particular. Blue is decent, especially if you need Nott or are merging Julia. Colorless could be great if you’re merging Alm or Leif (or Bramimond, but that’s much less necessary for scoring), but otherwise probably offers the least of the four.

Have we learned whether it’s worth pulling? It may be hard to say. This banner has solid value, especially on green, but it's not necessarily top tier. Byleth himself is announced to return in September, color sharing with Legendary Celica and an unknown third unit - so if that sounds more valuable to you, it may be worth saving up orbs now and spending then. There is a slight chance that Intelligent Systems will alter the deal and change the reruns, but based on past Legendary and Mythic banners it is quite unlikely.

Like any decision in Fire Emblem Heroes, the needs and wants of each individual player will vary, so it’s ultimately up to you to decide whether it’s worth pulling for Byleth or any of the other units on this banner, or whether it’s more important to save up for some other goal - a future Legendary or Mythic banner, Choose Your Legends 5, the new release of some character you’ve been waiting for, or just to create the biggest pile of orbs ever seen, and achieve true enlightenment.