Should You Pull - Regal Rabbits Edition 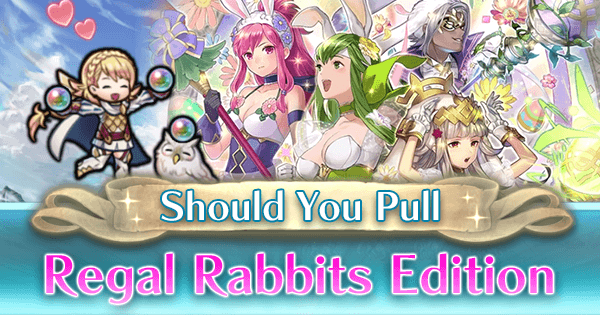 This is a standard 4 unit banner, meaning that the odds start at 3%. As there is a unit of every color, the odds for pulling on each color are good, though slightly less than a 3 unit banner

Palla has the second highest Attack of all dagger units, eclipsed only by Halloween Kagero. Her Attack is high- and it is a Super Asset, meaning that she can hit 41 Attack before equipping a weapon. This is crucial because she may not survive counterattacks from physical units with her low Defense of 17.

Neither of her defensive stats are over 30, and with a Defense of 17 and Resistance of 29, Palla’s bulk seems uninspired and similar to many, many other dagger users (PA Olivia, HS Camilla, NY Takumi, Eir, and Spring Kagero all have almost identical defenses, just to name a few).

Compared with the four star Sothe

Compared with the three star Kagero

Armor? I Hardly Know Her!

Palla is the first unit directly marketed toward Aether Raids, and she can prove exceptionally useful during the game mode. Worth noting also is that Palla is the first ranged flier with a BST in the 155 Bin, meaning that she scores the same as a gen 1 melee flier without a prf. However, Palla’s niche is difficult for her to fulfill, as her low Defenses makes her vulnerable to counterattacks from the very armored unit’s she’s supposed to counter.

Marisa is another lance flier in a bloated pool (the 15th, in fact), and like other lance fliers, she has moderate Attack, good Speed, and decent defenses. In fact, she seems almost identical to Shigure- though with so many archetypes in the same pool, it’s difficult not to overlap.

Despite the lack of innovation in her unit type or stat spread, Marisa holds up well against other blue lance fliers, and remains tied for the highest combined Attack and Speed with Hostile Springs Ryoma.

Compared with the four star Shigure

Compared with the three star Catria

The Other Carrot Lance

What Makes You Special?

With blue fliers like Catria and Shanna recently getting excellent prf lances, it doesn’t seem like Marisa brings anything particularly new to the table, so it can be difficult to fully recommend her. That being said, she does have particularly high Speed and decent Attack to go with it, eclipsing units like Shigure in all but Resistance. With that being said, she’s a definite step up from the prf-less 3-4 star pool of blue lance fliers, for whatever that’s worth.

Bruno finally makes an appearance as a healer cavalry! Unfortunately, that’s the most exciting thing about him, as the rest of his stats are rather lackluster, even compared to other units in his class.  While he has the highest Defense and HP stats by a significant margin, he is lacking just about everywhere else. This makes him unique, but ultimately less useful than many other healers in the game.

Egg On Your Face

We Waited For This?

Our first iteration of Bruno is in many ways, a bit of a disappointment. Compared to many other units in his own class, he falls short- but he is not without his merits. His base kit gives him a fantastic stat boost in the form of Atk/Def Push and Ovoid Staff, while his staff also allows him to play offensively without sacrificing his supportability. Due to his massively high Defense stat, It almost feels as if Bruno should be unequipping Dazzling Staff and instead going for a Close Counter set so he can counter melee opponents who try to attack him.

Regardless, Bruno is at least unique, if a little confusing, and can serve as an excellent self-sustaining physical wall to any team.

Veronica has typical high offensive mage stats, with 35 Attack and 36 Speed. This is quite good, but forces her to compete directly with SF Nino, who has 2 less Attack and 2 more Speed with nearly identical defensive statlines. At this point, deciding which one you’d rather use boils down to user preference, though Nino’s extra Speed is generally seen to be more helpful to her archetype than Veronica’s Attack.

Compared with the 3 star Soren

Compared with the 3 star Nino

Compared with the 5 star SF Nino

Can I Offer You An Egg In This Trying Time?

The Arena Trifecta Is Complete

Nothing Ventured, Nothing Gained

Although her prf is unique and can allow her to stat stack to ridiculous levels, it’s difficult to keep her HP topped off without a healer- in addition, Veronica may suffer from lethal counterattacks when attacking into a dragon or armored unit who can retaliate from range.  With that in mind, she finds herself situation where it’s probably better to run a boring Bladetome set on her, and with no unique skills that work to support her combat, she’s something of a blank slate who will need lots of skill inheritance to be competitive. She is still a good unit with a fantastic statline, but again, nothing we haven’t seen before.