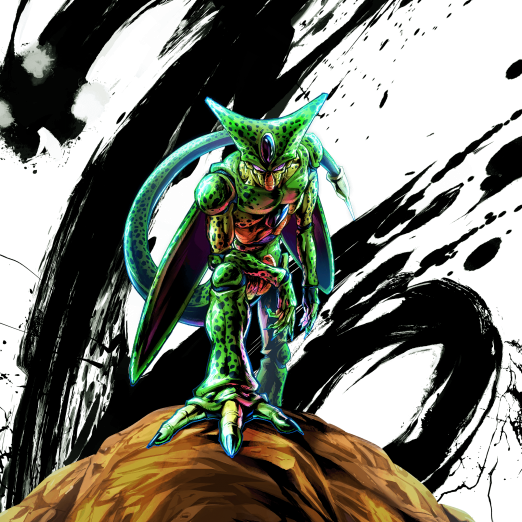 SP 1st Form Cell GRN is a strong Fighter with a detailed and complex toolkit that doesn't really amount to anything. While his positives are numerous - high contextual Damage, Debuff spreading, restoring his Vanshing Gauge, a self-sustaining Extra Arts Card - they are not nearly excellent enough to warrant running him over Fighters that compete for his slot on his Tag Teams.

Cell is an unconventional Blast-oriented attacker with a strange playstyle that revolves around staying in combat as long as possible. His kit is focused on this kind of prolonged exposure to the battlefield, but unfortunately, Cell neither has the neutral tools nor the bulk to pull this playstyle off.

Ultimately, Cell is outlcassed on his Tag Teams by stronger options with stronger Z-Abilities, leaving the ultimate Android in limbo.

After a brutally long 12 Timer Counts on the field, Cell is rewarded by inflicting all his foes with a +50% Damage Received Debuff for 20 Timer Counts. All in all, Cell is capable of some serious firepower if all goes well.

SP 1st Form Cell GRN's Main Ability is his strongest asset. Not only is it active after a mere 5 Timer Counts, giving it great flexibility, it also significantly increases his Offensive and Defensive capabilities. It increases his Vanishing Gauge restoration speed by 100% for 10 Counts, allowing him to restore it up to 2 times for free, if he can hold his foe off long enough.

Offensively, it benefits Cell by ramping his Blast Damage potential through the roof. It discounts his Blast Arts by 15 and Buffs his Blast Damage by 50% for 30 Counts. If Cell is able to leverage these two Buff sets to avoid enemy attacks and stink up the field for a while, he's guaranteed to trigger the Buffs that depend on him staying on it.

This ability is what enables Cell's gameplan.

SP 1st Form Cell GRN requires a lot of set-up to function well. If he is swapped in as an Offensive pivot, his Damage is guaranteed to be lackluster, as he needs 3 Counts to pass before his Damage becomes something to fear.

Additionally, Cell's only source of Bulk is the self-Healing he Buffs himself with when he enters Combat and his 10% self-Heal he gets when his Extra Arts makes contact. The Android menace's Bulk is paper thin, and needs a lot of Support.

On Future, Android, and Regeneration, strong Green Fighters abound, all of which give Cell a run for his money. In general, Green Fighters are difficult to justify including on most Teams, and Cell does little to justify his inclusion on any of the aforementioned Tags.

He gets the closest on Android, where his strange, split Z-Ability is the most applicable.

SP 1st Form Cell GRN is at best a side-grade for SP Android #14 GRN. In #14's place, Cell offers some strong mixed Offense, which is appreciated by some of this Tag's best Fighters.

He isn’t the absolute worst, but there’s really no reason to use him over SP Super #17 GRN, SP Android #14 GRN, SP UGA Super Buu GRN or SP Buu: Good GRN. He doesn’t really add anything to these Teams that they would need or want.