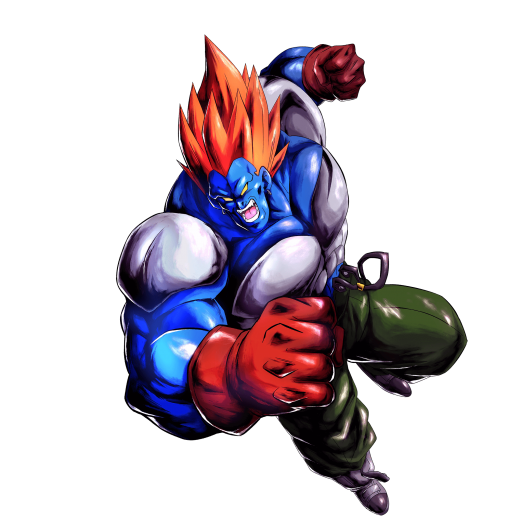 This Fighter is a result of SP Android #13 BLU absorbing the cores of his destroyed comrades SP Android #14 GRN and SP Android #15 PUR. As a result, he became an even more powerful Fighter. This also has given him access to the Fusion Warrior Tag.

SP Fusion Android #13 RED does just about everything. He also gets massive Damage Buffs the longer he stays on the battlefield, making him a supremely powerful Fighter in single combat.

Defensively, he’s very difficult to take out; his variation of Cover activates when switching into a Strike Attack, knocking the Enemy back to long range. This Ability can seamlessly link with his Special Move Arts Card as well. He also can Heal multiple times with various aspects of his toolkit.

The Android Tag was only missing a Red to complete its collection of viable core Fighters of every Element, and it got one that excels in every combat situation. Whether he’s destroying Fighters in the beginning of the Match or hanging on until until the bitter end, SP Fusion Android #13 RED makes his mark a deadly Fighter.

This is the bread and butter of his Offensive assault.

Alternatively, this Unique Ability also gives him his +30% Damage to Super Saiyans, which will certainly come in handy as the Tag has many relevant Fighters on Meta Teams.

His Main Ability not only Heals him for 30% of his Health, but draws an Ultimate Arts Card, Deadly Crusher, as well as gives him enough Ki to use it.

This Ultimate Move is similar to SP Perfect Cell YEL's "Solar Kamehameha," as it does Massive Damage, has increased power when activated, pierces through Enemy Cover, and comes with an absolutely devastating chance of Faint.

What makes this attack exceptional is its ability to be seamlessly woven into Combos, even dealing full Damage against Fighters with Cover Sustained Damage Cut Buffs active. There is no escape from #13's onslaught once it has begun.

While last-man standing Crisis can be dangerous to play with, SP Fusion Android #13 RED Heals for 30% yet again if this is the case, and gains an additional 50% Damage inflicted Buff, making him truly terrifying when he’s the last alive.

Those Damage Buffs stack with the innate Buffs he gives himself the longer he stays on the field, culminating in a horrifyingly powerful Crisis Fighter that can potentially end any Fighter in a single Combo. The presence of this Buff on #13 definitely gives the Android Tag a versatile late-game presence.

For being a Full Charge Deadly Bomber, his Special Move is very bland, which is surprising considering how oppressive it was in the Super Android #13 Movie.

It only deals major Damage and inflicts the Enemy with a Strike Attack received Debuff.

SP Fusion Android #13 RED needs some time to pass before his Offensive Damage Buffs kick in, which limits his power as an Offensive Pivot when switching in during an Ally's Combo.

He can potentially artificially lengthen the Combo with Tackle and Sidesteps to stall for time, but often that only gives the enemy more time to prepare a Fighter to switch in and handle #13's strikes.

His last-man standing Buffs only apply if his two downed Teammates are Android, and his Z-Ability Buffs the Android Tag Strike and Blast Attack, making this an obvious choice as their primary Red Fighter.

His non-Transformed counterpart, SP Android #13 BLU, is an obvious choice to field alongside SP Fusion Android #13 RED, as the two of them both have abilities that synergize with Android Tag Allies.

SP Super #17 GRN is also notable, as his presence on the Team gives it the potential to check both Strike and Blast Attacks via Cover change. SP Evil Android #21 PUR and SP Android #21 BLU each benefit from #13's presence on Teams. #13 provides perfect color coverage, a devastating Ultimate Move, and premier Crisis Utility to the cyborg vixens.

SP Fusion Android #13 RED also has great synergy with his Android comrade, SP Android #14 GRN, who can give the Team an additional Faint-inflictor and can take care of Blast Arts Cards clogging the Team's hand.

SP Fusion #13 RED is not an ideal fit for this Tag, as his Z-Ability is useless to the vast majority of Fusion Warriors and they already have a dominant Red in SP Vegito RED, but the two in unison give an insurance policy against the Yellow Color Counter Team.

Though he is arguably out of his depth on this Tag Team's Core, he is far from weak on it and could be considered as an alternate core member.

SP Fusion #13 RED can absolutely fit on the core of any Sagas From the Movies Team, as his inherent synergy with one of its best Fighters, SP Full Power Boujack PUR, makes him an excellent choice as either a Red option for the Tag or the centerpiece of an Android-based Sagas Warriors Team.

This Equip's incredible suite of Buffs lets #13 perform better in every stage of the match. The additional HP gives him some much needed bulk.

20% Strike and 18% to both Defenses is more or less a must-have for any Fighter that can use it and desires additional Strike Damage. Fusion #13 absolutely fits that criteria.

As a Fusion Warrior, #13 gets access to the Tag's best Equip, which supplements his already impressive Strike Damage and rockets his Bulk into the stars. The Critical Buff is appreciated, but not as necessary as the Buffs provided by the other two slots.

SP Fusion Android #13 RED was always a great Fighter, and still is, but his viability has always been up and down. Androids get releases in big bunches then eventually get neglected, and it's happened to him yet again.