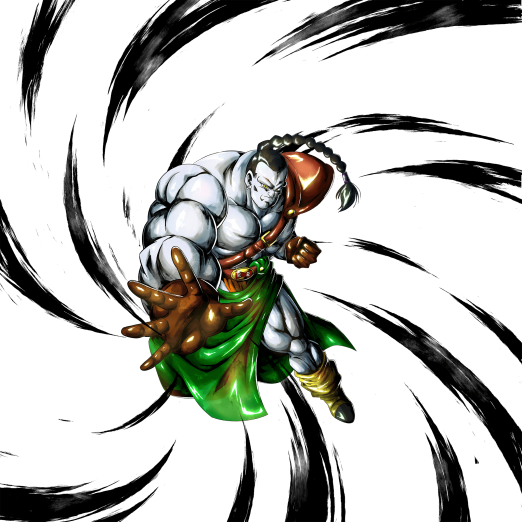 Right out off the  “Dragon Ball: Super Android 13!” movie, SP Android #14 GRN storms into battle with his big clanky muscles. This silent, metallic avenger is one of the most unconventional Strike-focused Fighters the game has ever seen.

He’s an ideal Melee Fighter, thanks to his Strike Damage Boosting Unique Abilities and his means to get rid of bothersome Blast Cards by changing them to Strike Cards upon entrance to the battlefield, a bizarre yet welcome aspect of his Kit that always ensures he'll have some thing to work with when he enters combat.

He's got a number of over interesting utilities to him, like a fantastic Z-Ability that's even welcome on non-dedicated Android Builds, a downright sickening Main Ability that can spread Faint like wildfire, and and Extra Arts Card that can stack permanent Damage Buffs and enemy Debuffs. Don't be disarmed by his quiet demeanor, this Android's power speaks for itself.

SP Android #14 GRN’s Strike Damage potential is off the charts. Not only he has multiple Strike Damage boosting Unique Abilities, he also immediately swaps his Blast Cards for Strike Cards once he gets switched in. This is absolutely vital for him, as it lets him excel even on Blast-focused Android Team compositions.

Once he activates his Main Ability, his Strike Cards get a 20% to inflict Faint per hit. Considering how easily SP Android #14 GRN can produce Strike Cards when entering the field, this is a very useful Effect. It can be downright maddening watching this ailment work its magic over and over, just make sure to stop laughing before the effect wears off.

The Silent Android's Special Move Arts even has a chance to Inflict Faint if his Strike-Damage toolkit wasn't deadly enough already.

SP Android #14 GRN joins the club of numerous group of Androids that have a good Z-Ability, by having one that Boosts both Strike and Blast Damage. This will make him a great option for this Team even in the eventuality he gets powercrept as a Core Fighter.

His Blast Damage output is atrociously low, to the point that it considerably lowers his Special Move Damage output too. Also, considering that Androids have a Blast-centric deck --which is also a fault of his since he has Held Blast Arts Cards-- he’s basically restricted to repeatedly take advantage of his Cards swap Unique Ability to be good.

This makes him a quite unreliable Fighter to keep on the field for prolonged periods of time, which means he’s also bad as the last man standing in a Match.

He replaces EX Android #17 GRN on the Androids’ Core. His Strike Damage output can be very useful if his Unique Abilities are properly utilized, but he also can be a nuisance if used wrongly. His Held Blast Arts Cards make him a great partner for SP Android #17 PUR. The strength of the queen of the Androids, SP Evil Android #21 PUR also pairs exceptionally well with the silent killer.

Thanks to his held Blast Cards, he works well with his untransformed partner, SP Android #13 BLU, as well as his partner in crime, SP Android #15 PUR, each of which favor Blast-Damage over Strike Damage. As far as Support is concerned, his Extreme Variant EX Android #14 BLU, SP Android #21 BLU, and SP Android #18 RED all function as fantastic enablers of his playstyle. With the right Support, #14 can rain havoc, and plenty of Faint, on his foes.

Everything in his toolkit is geared towards Strike Attack, and therefore it is best to completely focus on driving it up as high as possible.

Any Android that can use this Equip should do so, as it is one of the best all-rounder Equips in the game.

He's fairly durable on top of being a Melee Fighter, and this Equip is fantastic in all situations. The added Bulk also mitigates his disadvantage against most deadly Purple Fighters, though he still does need some Support on that front to survive.

SP Android #14 GRN is a pulverizing Melee Fighter with exceptionally high Strike Attack, Strike Buffs, and a multitude of ways to inflict faint. While the Blast-centric Android Team would seem problematic for him, he swaps any Blast Arts Card to a Strike Arts Card when he enters the battlefield, ensuring he’ll be able to do what he does best.

Androids have fallen off a bit so he hasn't been seen, however.