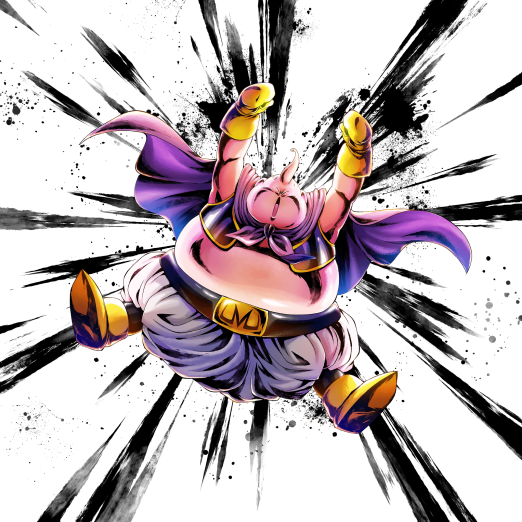 Zenkai 1 Majin Buu: Good GRN is a horrifying take on the power of Dragon Ball's most unassuming villain. His cute and puffy body belies his Offensive and Defensive dominance on Regeneration Tag Teams.

The power of the ultimate Majin primarily lies in his ability to subject his opponents to lopsided wars of attrition via his Health Recovery and Sustained Damage Cut skills. He not only Heals himself when changing Cover, but he also when he tanks an enemy's combo, restoring up to 30% of his lost Health.

The deadly Majin even boasts Support Capabilities with his Main Ability - his overall kit is a veritable toolbox of utility, putting him at the forefront of what is arguably the strongest Team in the game.

Zenkai 1 Majin Buu: Good GRN codifies Regeneration's gameplan as one of pure attrition. His Main Ability's Healing utility makes an already tanky Tag into a veritable fortress, especially when its key members are at high Limit Break levels. Buu's personal Healing is a great boon in drawn out bouts.

Thanks not only to his recovery post-combo, but also his 15% Cover Change Heal, Buu establishes himself as one of the hardest Fighters in the game to leave dents in.

Zenkai 1 Good Buu GRN can prevent Enemies from switching for 5 Timer Counts the first three times he enters the battlefield, letting him function as an assassin and a time-waster. He can leverage this Ability to Rising Rush problem targets or stop his foe from re-orienting their Team order.

Setting up locked switches for his Allies is fantastic utility that lets him shred through problem Fighters mercurially.

Zenkai 1 Majin Buu GRN has a plethora of ways to augment his Damage, from one-time Strike Damage Buffs to Sustained Damage Received Debuffs upon entering the battlefield.

The gluttonous demon's Main Ability also serves as a Team-wide +30% Damage Inflicted Buff in addition to a +25% Heal, allowing him to shred through his foes and enable his comrades to do the same.

It's difficult to find an area Zenkai 1 Majin Buu GRN struggles with, but if one must exist, it is his limited selection of strong Equipment. He has access to few high percentage Equips, leaving his impressive Zenkai Stats wanting.

Buu especially lacks Equips that benefit him Offensively, which limits how much he can make his Strike Damage shine.

The Regeneration welcomes the return of one of their best options back in the Team's glory days. Zenkai 1 Majin Buu GRN is an absolute terror on this Tag Team, and thanks to its roster of Supporters, Buu is truly given a chance to shine.

SP Super Baby 2 BLU is the ultimate Majin's greatest Ally, mainly thanks to his Health Recovery and Health Recovery potency Buff. This pair can outlast the heat death of the universe.

SP Perfect Cell YEL and SP Android #21: Evil PUR each complement the majin in their own ways, with Cell taking care of problem Purples that infest the PvP landscape and #21 acting as an excellent user of Buu's Support and Switch-Locking.

This is excellent on a pure Tank like SP Good Buu GRN and since he works well with Yellow Fighters who can cover for his Purple weakness, the third slot is even more valuable.

This Equip provides a HP Restoration Buff, working well with Buu's ability to heal after every attack. Alternatively, a second base HP Equipment can be used here, such as Phwee--!!.

This Equip provides Buu with a Pure Strike Buff which works well with the Strike Buff Effect from his second Unique Ability.

His recent Zenkai Awakening makes him as durable as ever, and Regeneration has been getting a ton of love in multiple updates in a row, making him even more effective. It's very hard to defeat Good Buu in a war of attrition, and he has plenty of defensive and offensive pivots at his disposal.