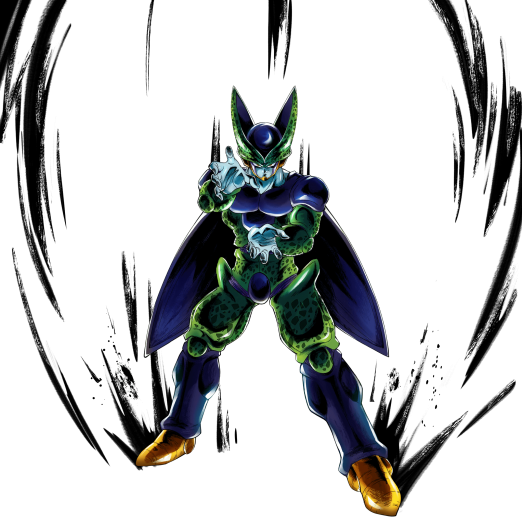 This Cell variant is the self-proclaimed “Super Perfect” form of Cell after he self-destructed during his fight with Gohan. He was able to survive and due to the Zenkai boost, came back more perfect than ever.

SP Perfect Cell YEL brings a hellacious and unforgiving Offensive toolkit with a few tricks up his sleeve that aid his durability. Most notably, he has access to Cover: Rescue, which completely negates any incoming Damage once.

His Main Ability draws his Ultimate Arts card, Solar Kamehameha, which is the move he used in his iconic beam struggle with Gohan. Also akin to the anime, he gets a multitude of Buffs whenever he hops into the battlefield, showcasing the newfound power gained from nearly dying thanks to his Saiyan cells.

All in all, SP Perfect Cell YEL is an incredibly oppressive Fighter that can put almost anyone down and keep them there. Even a year past his initial release, Perfect Cell is still one of the most deadly and flexible Fighters around.

SP Perfect Cell YEL’s Unique Ability is what makes him such a nuisance to play against. His Blast Arts cost is reduced by 5 which cannot be canceled, but much more powerful are the Buffs and Debuffs he can inflict when switched into the battlefield.

Whether he’s being switched in for Offensive or Defensive reasons, this Unique Ability provides him with a variety of advantages that can change the momentum of the Match in an instant.

SP Perfect Cell YEL's newfound power, the Cover: Rescue, completely negates all Damage – even the Rising Rush – when he’s switched into a Combo. This remains one of the most powerful and potentially game-changing Cover variants in the entire game.

When utilizing Cell in combat, it's best to take care not to switch him into a combo pointlessly. Even the threat of Cover: Rescue can bait opponents into expecting it, allowing for Cell's Allies to easily Vanish enemy combos if they try to predict its usage.

Solar Kamehameha does massive Damage, increases his Damage inflicted by 25% when activated, and has the game-changing 20% chance of inflicting Faint. This is beyond deadly if it lands and even if the Enemy survives, there’s a chance he will be immobilized for several timer counts.

This Ability can potentially end the match by itself and even negates 80% of Sustained Damage Cut effects. No matter who on the enemy team decides to take the hit, it is sure to leave them reeling.

The Shot Heard Around the World

Cell's incredibly powerful Perfect Shot Special Arts Card allows him to seamlessly begin a combo against his opponents if they misplay against him.

He can use the move to catch enemies in the midst of a sidestep, during a mid-range move, or even cancel Rising Rushes with it.

SP Perfect Cell YEL is a versatile Offensive Fighter that boasts useful utility in the form of Debuff spreading and Cover: Rescue, but every aspect of him is ephemeral.

His opening gambit Damage Buff wears off after some time, and his charges of Cover: Rescue and his Card Sealing are very limited. All this equates to a Fighter whose value decreases over the course of the match.

Perfect Cell faces an uphill battle in all Crisis situations where his Damage output nosedives. Cell relies on having Allies to piggyback off of, and without them, he runs into some serious issues.

Cell's Offensive might isn't questionable; he's a cornerstone of all of his Tag Teams, but that doesn't mean he's Defensively powerful.

Once Cell's Cover: Rescue Charge is consumed, he lacks staying power, even in neutral match-ups. It is best to give Cell Defensive Equipment and Pair him with traditionally Defensive Fighters to alleviate his bulk issues.

SP Perfect Cell YEL is one of the Regeneration Tag's mainstays. While he loses direct comparisons with SP Piccolo YEL, Piccolo is far rarer and less ubiquitous than Cell. Cell makes an excellent partner for the incredible SP Super Baby 2 BLU, who augments Cell's Damage output and self-healing.

The incredible Offensive force SP Evil Android #21 PUR is a fine partner for the Ultimate Bio Android. #21's ephemeral Substitution Counts let her and Cell form a deadly Offensive Core, and allows Cell to apply his Inflicted Damage Buff to himself multiple times.

Every Regeneration Fighter appreciates SP Perfect Cell YEL's presence on the Team. Even off the Team, Cell assists the Team with his Z-Ability's massive boost to Strike Damage.

All Cell variants are classified as Future Fighters, which does give him a place on this Team. Unfortunately, Cell's Z-Ability only Buffs the now outclassed SP Zamasu RED, leaving him somewhat wanting.

If this lack of synergy can be overlooked, Cell functions well on this Team. He greatly appreciates the Ki acceleration from SP Mai GRN, and the additional Damage provided by the mere presence of SP Super Saiyan Rose Goku Black RED.

With the arrival of SP SSGSS Vegeta GRN's update, this Tag has achieved significantly more relevance. While Cell is not Buffed by Vegeta's Support, he can provide Color Coverage and Cover:Rescue Utility in a pinch.

Cell's power can be significantly augmented by the power of Zenkai 1 SP Goku Black YEL's Zenkai Ability, making him into even more of a titan than he already was.

The Android Tag Team is where SP Perfect Cell YEL can truly feel unencumbered by his poor defenses. He can form a truly sinister trifecta with SP Super #17 GRN and SP Fusion #13 RED, the three of them equating to a perfect Color Wheel with every type of unique Cover Change Ability. SP Android #13 BLU is always an option, as he protects the ultimate android from his inherent Color weakness. SP Android #21 BLU is an even better Blue option for this Tag Team, as the Buffs she provides help Cell and his allies maintain their Combos longer.

SP Perfect Cell YEL’s Ultimate Move does enough Damage as it is, this Equip not only bolsters that but gives him a significant Strike Attack Boost to go along with it.

This pairs amazingly with the above Equipment. SP Perfect Cell YEL is primarily used in Android Teams and will have to utilize Blast Attack quite often. Even more Ultimate Damage is also very much appreciated.

The buff this Equip provides to his Health is very welcome on an off-tank Fighter like Cell. The final condition on this equip is fulfilled by Cell himself, letting him easily reach high bulk totals.

SP Perfect Cell YEL lasted for what seemed like forever. He's definitely aged considerably at this point, but his wealth of Tags as well as the few annoying capabilities in his toolkit are actually keeping him afloat. He's a secondary or tertiary choice in most cases.