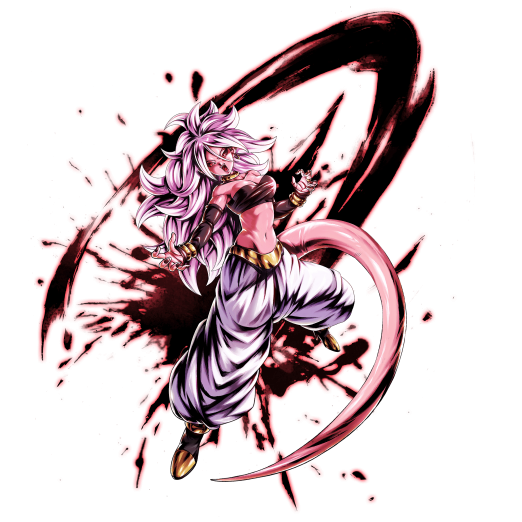 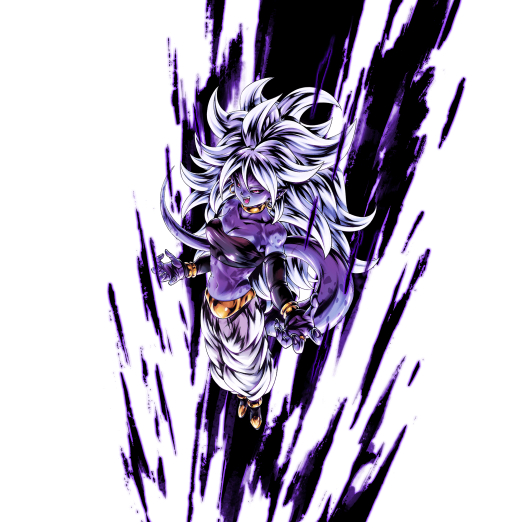 The most ravenous Android has arrived, and she's going to devour everything in her path. SP Evil Android #21 PUR is nothing short of a nuclear warhead aimed straight at the PvP landscape. Her absurd versatility, oppressive Offense, downright unfair sustainability, and applicability on some of the game's most prolific Teams makes her unequivocally valuable.

Considering she fits in a lot of great Tags, it's safe to say that SP Evil Android #21 PUR is here to stay as one of the  most dangerous Fighters in the Meta. This deadly, versatile Android is simply faultless.

After a mere 15 Timer Counts, she receives her first permanent Inflicted Damage Buff, and then another once 30 Timer Counts elapse, this time coming part and parcel with a -5 Strike Arts Discount. Speaking of her Strike Arts, each time she uses one, her Ki Recovery is Buffed by 15% for 15 Timer Counts.

To call this combination of Buffs ridiculous would be an understatement. When these Abilities coalesce with her post-Transformation Main Ability, which grants a Card Draw Speed Buff for 30 Timer Counts, SP Evil Android #21 PUR reaches levels of Combo Damage only matched by dedicated Offensive Fighters that can't do half of what she can.

What is without a doubt the most threatening and oppressive thing the Majin Android can do is halve her Substitution Count 3 times post-Transformation. Being able to enter combat again after a mere 5 Timer Counts allows her to stack the Buffs she gives herself when taking to the field, as well as any Buffs she receives from her Supporting Allies.

It cannot be stressed enough how beneficial this tempo advantage is for #21's Team. Teams she's a part of have the potential to corner any problem Fighter on the enemy squad by outpacing them.

Her instant Ki Restoration and Strike Arts draw on entrance ensure that she'll always have the capacity for a deadly Combo, even when dropping in on short notice.

Plus, thanks to the absurd amount of extra Strike Cards #21 will be drawing in tandem with her switches, it's not uncommon for her Team to see Rising Rushes early and often.

SP Evil Android #21 PUR has a versatile and flashy Extra Arts Card, which functions like an unconventional projectile. It does not begin a Combo, but it makes up for this by providing very valuable utility. It Reduces enemy Ki, Heals the insatiable warrior for 10% of her Health and awards her a permanent +10% Inflicted Damage Buff. The Healing and Ki Reduction effects are magnified post-Transformation, as if this card needed to be stronger.

Its nature as a projectile allows it to trump enemy Rising Rushes and all non-Special projectile Arts. It can even seamlessly chain off of a Tackle

The Pink Menace's Special Move Arts is also incredible. This projectile raises her Inflicted Damage no matter what, but can also have its own Damage augmented by the number of cards in the Majin's hand when it is activated - it destroys them and increases its power according to the number destroyed. This Card, too, is enhanced after Transformation.

#21 owes this Bulk primarily to her massive Stat increase after she Transforms, as well as her Z-Ability, which will always give her a significant Health boost. These are not her only sources of survivability, however.

SP Evil Android #21 PUR's massive collection of Tags unsurprisingly gives her access to one of the most fittingly massive Equipment libraries in the game. She has access to Equipment that Buffs her Health considerably, her Defenses considerably, and even her Vanishing Gauge Recovery Speed and Ki Recovery.

This allows her to completely tailor her Equipment loadout around the Team she's a part of, putting her already fantastic versatility into a whole new realm.

Her Blast Attack is Only Good, not Stellar

This complaint is completely pedantic and barely worth mentioning, but #21's Blast Attack is not as high as her Strike Attack, and therefore she's not quite as overpowered on a Blast-oriented Team. Don't worry, she is still incredibly overpowered, just not as dominant as she would be on a Strike-oriented Team.

Transformed Evil #21 in incentivized to use her Main Ability as fast as possible, to get her the additional Card Draw Speed it bestows. Unfortunately, it's entirely possible for the Extra Arts Card it draws to clog her hand, and multiple Extra Arts Cards are somewhat clunky when her goal is to string together fatally long Combos.

Of course, any of her Allies with strong Extra Arts Cards appreciate the surplus, but for #21 herself, overflowing with insatiable hunger can be problematic.

As the perfect Android, SP Evil Android #21 PUR is unsurprisingly this Tag's greatest Fighter. The race was not close. Despite being head and shoulders above her compatriots in power, she appreciates their ability to cover her weaknesses - or rather her one weakness, to Yellow Fighters, thanks to SP Fusion Android #13 RED and SP Android #18 RED.

If this Tag didn't have the best Team in the game before, it definitely does now. Evil Android #21's Health-Buffing Z-Ability frankly turns this otherwise impregnable Team into a club of immortals. SP Super Baby 2 BLU's Offensive Support and Healing can keep #21 fighting fit forever. His Health Recovery Potency Buff is also a great boon for #21's self-Healing.

The locking, tanking, and Strike-offense utility of Zenkai 1 Majin Buu: Good GRN allows #21 to claim early kills and can reliably Defend her. A noteworthy companion for the ravenous Android is SP Super Janemba RED, who can destroy the Yellows that give her trouble and makes great use of #21's Extra Arts Cards.

The overwhelming flexible juggernaut, SP Piccolo YEL, can Support and Defend the ravenous Android, and he's also one of the most Extra Arts-hungry Fighters in the game, so they get along swimmingly.

The Female Warriors Tag has always been fairly powerful since its inception, and SP Android #21: Evil PUR is what has brought it back to dominance. Its identity has completely shifted in a cyborg direction, with fighters like SP Android #21 BLU and the woman of the hour leading the charge.

The clear best partner for both of those Androids is SP Android #18 RED, whose receives Support from the good #21 and can effortlessly guard the evil one.

The true potential of this Tag was unlocked by #21's incredible Substitution Count Reduction, as it enables unprecedented levels of Buff stacking that can let SP Android #21: Evil PUR reach some of the highest Inflicted Damage Buff Totals realistically possible in the game.

SP SSJ2 Kefla GRN is a fantastic addition to this Tag's already impressive roster, as she pairs absurdly well with this Tag's best Fighters, most notably Android #21. The two of them are an oppressive core, though additional measures must be taken to protect Kefla if she is fielded alongside Android #21, as #21's Health-Buffing Z-Ability does not Buff Female Warriors.

This equip is an absolute must on Android 21, as doubling down on her high Health total will make way for incredibly lopsided matches.

Android 21 has a plethora of good Equipment options. This choice provides 21 with a very large bonus to her Base Strike Attack. However, this Equipment has plenty of replacement options such as: Incarnation of Evil and Bwaaaaa! providing additional Special Move DMG with Base Strike Attack, or I'm Counting on You... and Awakened Romantic Drive providing all around solid Buffs.

Buff it all. Consume Everything.

SP Android #21 BLU's Zenkai has significantly increased SP Android #21 PUR’s effectiveness. She has still aged a bit and is definitely not the oppressive Offensive force she used to be, but the aforementioned Blue #21 does a sensational job enabling her with a very wide variety of switch out Buffs.