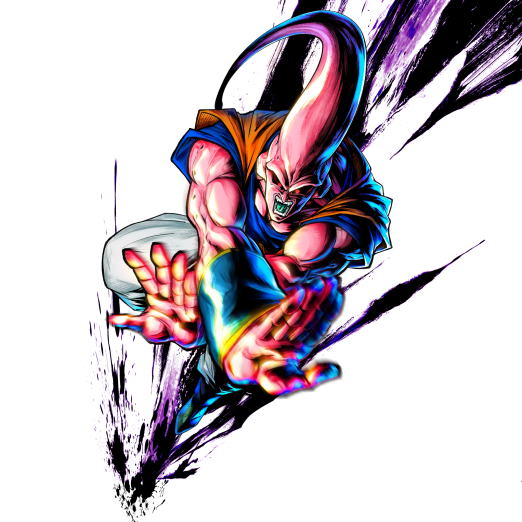 This variant of Majin Buu has attained new power as a result of absorbing Ultimate Gohan and true to form, his toolkit functions as an inversion of SP Ultimate Gohan GRN.

SP UGA Super Buu GRN, affectionately referred to as Buuhan, has an incredibly powerful toolkit that punishes his foes for doing well and becomes incrementally more powerful the more times he enters the battlefield, representing the strength he gains as he acclimates to his body.

The Damage Buffs he gains every time he faces a foe on the battlefield scale out of control quickly. He starts with a sizable Strike Damage Buff and eventually he gains Ki Restoration and Abnormal Condition Healing, letting him function as a Crisis Fighter and an all-purpose Offensive Pivot.

The defining aspect of his Kit is his deadly Defensive trick - the Extra Arts Card Barrier. With Barrier, Buuhan enjoys peerless neutral advantage, and he can reliably obtain it whenever a foe avoids one of his attacks.

Buuhan's versatility and staying power cement him as one of Regeneration's best Fighters, though he's currently outclassed by another variant of himself.

SP UGA Buu Super GRN is one of the most quickly scaling permanent Damage Buff Fighters in the game.

Thanks to With a Main Ability that significantly enhances his Inflicted Damage by +45% and his Ki Recovery by +35%, which can be activated after only 5 Timer Counts, this Fighter gets going fast.

His Damage output also increases either he or his foes switch in and out of Combat, and he even gives himself a +20% Damage Buff whenever his attacks are evaded. This all equates to a Fighter with fantastic potential as an Offensive pivot.

I Didn't Even Feel That!

Outside of his fantastic Damage Output, Buuhan derives his value from his absurdly broken Barrier Card, which not only Heals himself by 15% when activated, but also reduces the cost of his Strike Arts by 5 and can chain into Combos when triggered at close range.

It's not like it's hard for Buuhan to supply himself with these either, as his Unique Ability draws them. So long as he's not getting charged by a Rising Rush, this Barrier is the go-to Defensive option when it is available.

Because Buuhan Draws Extra Arts Cards so often, they can sometimes clog up his hand. It's common for Buuhans to have their Combos cut short by an acute lack of hand space. For this reason it's best to pair him with Fighters that have an easier time using their Extra Arts Cards.

SP UGA Super Buu GRN has an excellent toolkit, stats, and a decent Team to back him up. Unfortunately for him however, Green is the worst color for a Fighter to be in this current Meta.

SP Super Vegito PUR makes very quick work of him because of his color advantage as well as Anti-Regeneration.

Buuhan is an excellent choice to head any Regeneration Composition, as his Defensive and Offensive Utility makes certain match-ups a breeze.

His power has been significantly augmented thanks to the Zenkai Awakening of the already integral Bench Staple, Zenkai 1 SP Majin Buu GRN, whose Zenkai Ability turns Buuhan into an absolute monster. Though most players will choose to use Zenkai Buu over Buuhan, intrepid battlers who use Buuhan instead will not be disappointed.

Additionally, the Team can run an extremely Offensive Core that doubles down on Buuhan's high Damage with SP Android #21 Evil PUR and SP Perfect Cell YEL, both of whom also enjoy a steady stream of Extra Arts Cards.

This is more of a twist on the Regeneration Build, both Buuhan and Zenkai 1 SP Majin Buu GRN are used on the Core of this unconventional set-up.

With either SP Piccolo YEL or SP Perfect Cell YEL functioning as the third member of this Trifecta, it can easily demolish any opposing comp that doesn't rely on the meta Purple Fighters that are so wearily common.

Doubling Down on all of Buuhan's Major Damage sources is the name of the game with this Equip. The potential additional Combo extension provided by the Ki Recovery Buff is also a fantastic way to augment his already impressive Combo Tool arsenal.

Even more Strike Attack is the way to go, plus the Damage Buff for his Special Move Arts is greatly appreciated.

This Equip provides strong Offense and Defense, especially for Fighters on Regeneration Comps, which is where Buuhan will be spending most of his time.

Akin to the anime, SP UGA Super Buu GRN has a bit of a chaotic toolkit but the payoff can be tremendous. At full stacks, he’s an Offensive force with a great means to defend himself with his Extra Move Barrier.

Regeneration always seems to take a seat behind another Team every Anniversary, and it just happened to poor SP UGA Super Buu GRN again. Future and God Ki are simply better options to use at this point, and SP Good Buu GRN was always the preferable Green for Regeneration anyway.

"Such splendid fireworks" (Co-Op Extreme F2P Chairza)
Well, we are back with another Extreme difficulty battle, been a while since I done…
Counter-Meta team
Can someone help me make a team to counter the meta? I dont even have any zenkais and…
Help building best team for 18 YEL
i want to ask for some suggestion in making a team with 18 YEL that could works in the…
I need help with my team
Hello, I have been playing for almost a month now and I would like to make a good team…
Yet another "help me with my team"
Hello everyone I’ve been playing DBL for about a month or so now and I was hoping to…
Read More