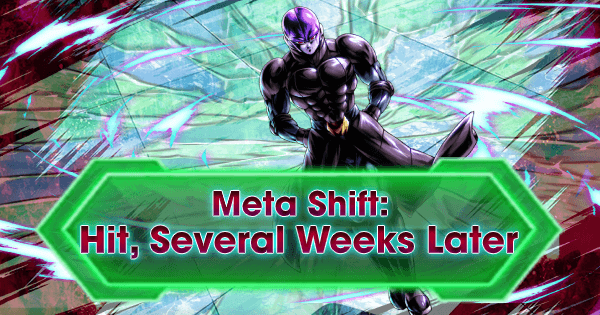 It has been precisely 1 month and 24 days since Legends Rising Vol.9’s release day. The new Update surprisingly brought it up again. However, more than anything else, what characterizes this Banner is SP Hit YEL. This Fighter has always been a point of discussion for the community, since Players’ opinion about him has been split throughout the weeks. Some think his Damage output makes him amazing, others believe his weaknesses are too heavy for him to be particularly relevant

We of Gamepress weren’t particularly high about him and the banner generally. Regarding SP Hit YEL in particular, we thought that him being limited to a fallacious Team Build such as a Color Counter would’ve not made him future-proof.

Just like at his release, Yellow Color Counter is still the most popular Team for him. However, it isn’t as “static” as it was some weeks ago. In fact, now the Team has many different Builds, but all share similar problems. Regardless of if he’s paired with SP FF FP Frieza YEL or SP SSJ Youth Gohan YEL or EX LSSJ Broly YEL, with Purple becoming a less prominent Color and Red being more stable than before, Yellow Color Counter lost its purpose as a Meta Counter Team.

In fact, Color Counters generally are funny composition that allow Players to pair together Fighters having different Tags, however having two Fighters with the same Color Type on the Team can really be detrimental if the opponent has even a single Fighter that can counter it, considering that the off-Color Fighter is often not good enough to protect the other two, since he lacks synergy.

Unironically, some people like putting SP Hit YEL here because he synergizes decently with the Team if SP SSJ2 Caulifla PUR and SP SSJ Kale RED are on the Bench at 5*, and he Buffs SP Ribrianne BLU with his Z-Ability.

However, SP Rozie YEL is definitely a better option than him as the Yellow Fighter of the Team, because her synergy is definitely better, and she’s also more effective at some facets of the Game -- she’s a tankier option, her Defeated Buffs are useful --.

However, overall Hit on Female Warriors is not the worst idea ever if you really want to use him.

Some Players try running SP Hit YEL on some random Teams. Since he benefits a bit by being paired with Blue and Green Fighters, he sees some use in some Builds like Fusion Warrior or Lineage of Evil.

However, these are just not good Builds for him. The low synergy makes him very fragile and even limits his Damage output.

By now, Players expected that some new Universe 6 Fighters would’ve been released, providing him a Team he’d synergize greatly with. However, this has not been the case, and the clock is ticking.

His Damage output is definitely still on the high side, however his durability, that already was very low at release, is becoming more hindering by the day.

At this point in time, it’s unclear how developers want to manage this situation, meaning that we don’t know when -- or if-- the Universe 6 Tag will receive new Fighters. However, if they truly created SP Hit YEL for him to only be a great Fighter for Yellow Color Counter, it’d probably mean he’s done for good.

Like almost two months ago, the answer is no. SP Hit YEL basically has no truly competitive Teams to be put in, so it’s not worth at all to pull for him.

Other current Banners, such as USTS #16 are just flat out better to pull on, but overall it might be better to wait until the next Banner, that is supposed to be a banger.