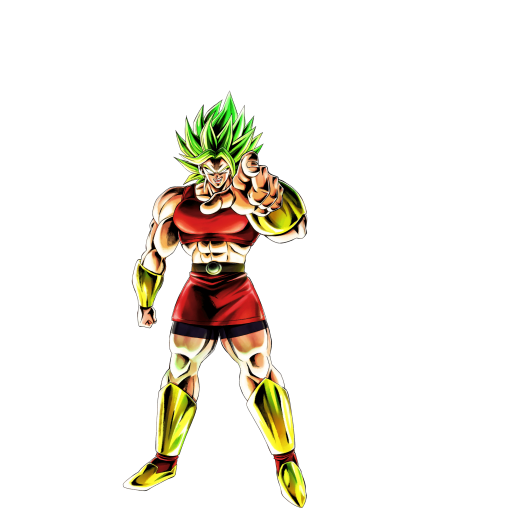 SP SSJ Berserk Kale RED brings a lot to the table for a lot of different Tags but perhaps most interestingly, for the Female Warriors.

This Tag pulls from several others which creates the strength of not having a single type of counter like Super Saiyan, Hybrid Saiyan, or Android, but also has the weakness of the constant threat of power creep due to Dragon Ball Legends tendency to favor Saiyans above all else.

Luckily, SP SSJ Berserk Kale RED works extremely well in whatever Team she’s put into and being a Saiyan gives her a considerably longer shelf life than most other Female Warriors. However, it's good to keep in mind that she is more quickly replaceable as top pick for each of these Tags for that very same reason.

SP SSJ Berserk Kale RED’s Main Ability is really something else. After 15 timer counts, it essentially becomes a third Unique Ability that gives her the opportunity to Buff herself and inflict stackable Debuffs for the rest of the Match.

Every Arts Card Attack she lands inflicts the enemy with a 10% more Damage received Debuff that lasts 10 timer counts each, and every single Attack or Combo landed against her Buffs SP SSJ Berserk Kale RED’s Damage by a non-stackable 10%.

As far as Cover Abilities go, this one is incredibly useful. Bringing SP SSJ Berserk Kale RED in during a cover switch destroys two Enemy Cards and immediately Boosts her Damage by 30% with at least 10% more Damage inflicted if she activated her Main Ability earlier in the Match.

This Cover will only bring the Enemy Combo to a halt if the Enemy had stacked Cards for the Combo and those Arts Cards got destroyed, but it’s a powerful Ability, regardless.

A Victim of the Meta

This Fighter is part of a lot of very powerful Tags, but sadly, that also puts a bigger target on her back since there are so many Fighters with Anti-Saiyan and Anti-Super Saiyan Abilities.

Luckily, popular ones like SP FF Frieza YEL, SP Boujack YEL, and SP Goku Black YEL are at a color disadvantage against her, but that doesn’t mean they won’t be able get a few effective hits in, or have another Teammate take her out with a Rising Rush.

This Tag was experiencing a lot of growth during SP SSJ Berserk Kale RED’s release, and with these stats, she is definitely one to build a Team around.

Since her Attack stats are both quite high and her Buffs mostly increase either one, SP SSJ Berserk Kale RED can act as the primary Tank or Damage dealer of the Team and come out on top regardless.

As the Red Fighter of a Saiyan Team, SP SSJ Berserk Kale RED has plenty of competition, but since her Defenses are so high, she’s a great pick since she can even take a lot of hits from Blue counters like SP SSJ Bardock BLU and SP FF Coora BLU.

This is another great Team for SP SSJ Berserk Kale RED not only for the Super Saiyan Z-Buffs, but also for how easy it is to fill the bench with Fighters who can support the whole Team.

She, SP SSJ Bardock BLU, and SP SSJ Broly PUR make for a powerful, resilient, and self-sustainable Team since all three have self-Healing Abilities.

Due to being a Saiyan and Female Warrior, she is blessed with multiple Equips that give her access to Health, which is ideal for her as a Defense Fighter with Healing on her Extra Move.

While this Equip is geared towards Strike Attack, she still makes good use of it considering how she can continually Debuff Enemies to receive more Damage of any type. More importantly, she gets even more Health making her that much more unkillable.

A must-have due to the 4 star Boosts it brings.

While her Cover Unique Ability destroys cards, it does not completely flip the Combat Loop, even if a temporary Damage Buff does help.

Her Main Ability allows her to Debuff Enemies for the rest of the game, but as Ranged Tank whose Strike Attack base stat is pretty low, this doesn’t give her a significant advantage in the current Meta.