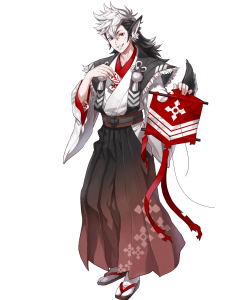 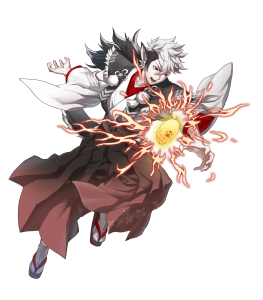 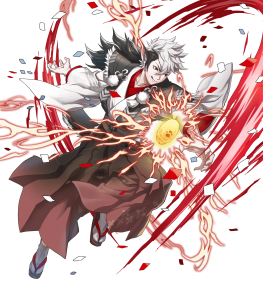 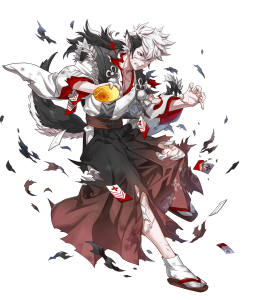 Despite Keaton's free status, he surprisingly managed to score fantastically in the weapon department. Essentially, in addition to the usual infantry beast effect (that is, gaining +2 Atk and a flat +10 damage on his Specials when transformed), his Resolved Fang offers some serious punch if set up correctly.

Specifically, the "foe's HP ≥ 75%" condition of the Fang is pretty much in effect most of the time as all map pieces start out as full health anyway, and when that is fulfilled, it gives Keaton even more physical bulk (+5 Def) and a surprising yet potentially lethal amount of damage potential: -5 enemy Def and 70% of the difference between Keaton's humongous Defense compared to the foe's.

Keaton brings some nostalgic remembrance into the new year with a statline so reminiscent of first-generation axe infantry (lookin' at you, Bartre) it's almost blinding. That said, having min-maxed HP, Attack, and Defense values does make life pretty good for Keaton with great damage output and fantastic matchups versus other physically-inclined enemies, especially Duessel and Legendary Chrom and Brave Hector.

Access to Wrath, Special Spiral, Time's Pulse, Breath skills, and Lull Atk/Def to add variety to an otherwise simple playstyle is something Keaton would be very thankful for in the new year.

The Resolved Wolfskin is freely available as a Tempest Trials unit, and any future copies will be at your beck and call via Heroic Grails rather than Orbs.

Keaton's base 24 Speed just barely floats above the "unacceptable" category as he makes himself vulnerable to follow-up attacks while being unable to make his own without Quick Riposte in most cases.

Even worse than Keaton's Speed is his Resistance, which makes taking any hit from magic and dragonstones a certainly bad omen for the incoming year.

(Intelligent Systems is really digging it in with the free green melee infantry units this year, eh?)

This is just meant to be tanking any and all physical units. Distant foil is meant to improve his two best stats, Attack and Defense, while letting him counter ranged physical foes, which he can surely be able to either survive, one shot them, or nuke them with a wrath charged bonfire.

Player Phase Nuke, hit them REALLY hard. Either have NY!Alfonse' Duo skill or Ally Support with Velouria to have either Moonbow or Glimmer ready on Turn 1.