IVs and their Importance 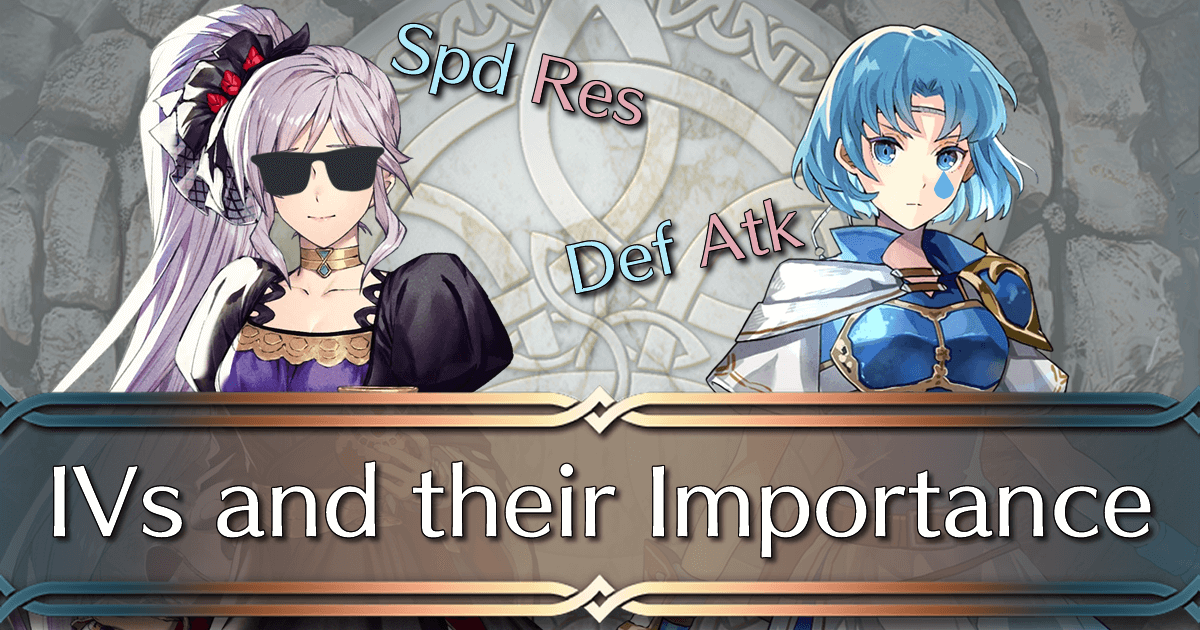 If you’ve talked with friends even a little bit about FEH, you’ve probably heard about IVs and Assets/Boons and Flaws/Banes. For newer players, being thrown into a game with lots of terminology, features, mechanics, and modes to unpack can be overwhelming. Because of that, this guide seeks to break down what IVs are to help beginners understand the practical importance of IVs and existence of (or lack thereof) a “dump stat” afterwards!

While all units have neutral Level 1 stats, IVs are variations of those stats that grant +1 to one stat, but inflict -1 to another stat. However, by the time that unit is Level 40, these variations are typically increased to +3 and -3. That Summer Byleth you just summoned? While her neutral statline at Level 40 is 40/36/42/16/21 without any weapons or skills, you may notice that when you train yours to Level 40, one stat is higher and one stat is lower than they should be.

Conveniently, there’s a very easy way to check IVs in-game. At the bottom of the screen, tap “Misc.” -> “Settings,” then scroll down until you see “Asset/Flaw Color Display.” The stat that increases by 3 is the unit’s Asset, while the stat that decreases by 3 is the unit’s Flaw. Turn that setting on, and you’ll be able to see your unit’s Asset and Flaw at a glance; Blue is the Asset, Red is the Flaw.

Lysithea’s Attack is Blue and her Resistance is Red, so her IVs are +ATK / -RES.

If your unit doesn’t have an Asset or a Flaw, then that means they have neutral IVs, meaning their stats at Level 40 will match their neutral Level 40 stats. Altina was temporarily distributed as a free unit, and free units almost always have neutral IVs.

None of Altina’s stats are Blue or Red, so she has neutral IVs.

If your unit has an Asset, but not a Flaw, that’s because once you merge a unit, their Flaw goes away while their Asset stays.

Summer Ingrid’s Speed is Blue, but no stat is Red because she is +1.

Sometimes, a unit has what’s called a Superasset and/or a Superflaw. Rather than increasing/decreasing a stat by 3, they do so by 4 (in fact, the Summer Ingrid in the picture above has a Speed Superasset!). These are not random; for example, Summer Byleth has a Speed Superasset, so with a +SPD IV, her Speed would increase from 42 to 46. This will always happen with a +SPD IV Summer Byleth.

For the Pokémon players out there, IVs are extremely similar to Natures: one stat goes up, and another goes down.

How important are IVs?

Now that we’ve gone over IVs, the next question to ask is...how much do they really matter? Should you really bother summoning another copy of a unit to fix their Flaw or get a better Asset? +3/4 and -3/4 to 2 stats don’t seem that important on paper, but whether or not those actually do make a difference depends on context.

Of course, if one of your favorite characters in the series has some really poor IVs, then don’t feel bad at all for attempting to summon another copy of them! To most players, using units they like to clear content is the most enjoyable way to play FEH, so getting a better Asset and/or removing the Flaw of those units would make clearing content easier, but still enjoyable. If you’re willing to keep the suboptimal IVs and want to save up for future banners, then that’s fine, too! It just boils down to whether you think it’s worth spending Orbs to try to get better IVs for your favorite units.

That aside, IVs don’t matter that much for PvE content. All PvE content can be cleared even if your units have suboptimal, or even bad IVs. Because PvE content can be retried as many times as players want to within an event or battle’s time constraint (if there even is one), players can experiment as many times as they’d like, with no particular cost to losing except for time (and sometimes Stamina). Certain units also have very strong weapons that allow them to perform well even with poor IVs.

Even though -SPD is arguably Celica's worst Flaw because she is an offensive unit, she can still sweep through waves of enemies. This is because Ragnarok, its Brazen Atk/Spd refine, and Brazen Atk/Spd as Celica’s Sacred Seal effectively grant her +19 Atk/Spd, skyrocketing her Attack to 68 and Speed to 52 before any buffs.

As for Arena, Arena Assault, Allegiance Battles, and Mjölnir’s Strike, units should have merges since merges increase the player’s score, meaning the Flaw should be non-existent anyways. It’s worth noting that Superassets can potentially increase a unit’s score, as these modes also score based off of BST (base stat total); the higher the BST, the higher the unit scores. BST is put into bins of 5; for example, 160-164 BST is a bin, meaning a unit with 160 is scoring the same as a unit with 164 if all of their merges and skills are identical in SP cost (higher total SP cost = higher score). Having a Superasset could be the difference between a unit being in the 155-159 bin and the 160-164 bin, so be sure to take that into account for scoring purposes. For more on this, check out this Arena Scoring guide my friend Raelet made! ^^

So far, IVs really don’t seem that important, right? Well...that changes when we get into Aether Raids.

Because of how optimized Aether Raids Offense and Defense teams are nowadays, every stat point counts. Summer Byleth would’ve been able to take out that Brave Ike on her follow-up attack, but she wasn’t able to because she’s not +Speed and the Brave Ike is Speed-stacking; now all of her allies are being KO’d by him. That 1 HP Valentine’s Alm would’ve been dead if Brave Lyn was +Attack instead of +Speed, but now he and his allies can clean up on Player Phase. Since your Female Kris is -Attack, she missed the KO on Eliwood by 1 HP. Shoot, now Summer Dorothea used Wings of Mercy to warp adjacent to Eliwood, scored the KO on Kris, and now your backline is exposed and you have to retreat. IVs are very important in Aether Raids because just a few points in a stat can make the difference between KOing and missing a KO, surviving with 1 HP or being KO’d, activating or not activating a Sabotage or Temari, being able to or not being able to use Wings of Mercy to warp adjacent to an ally, the supertank or the support unit soaking Chill skills and Shrines, the list goes on. There are no second chances in Aether Raids; there’s only one opportunity to take on a particular defense unless you just so happen to run into it again (or you’re doing Friend Mock Battles). The consequences of not playing well include wasting time, Escape Ladder uses, and Aether, a limited resource that increases by a set amount every reset. Because of these costs and the optimization of Offense and Defense teams, IVs are very important to secure kills, survival, and more.

Does a "dump stat" exist anymore?

A “dump stat” is a stat that a unit does not need to invest at all in because it’s already so low. In the early days of FEH (before Aether Raids), most players would pin HP, Defense, or Resistance as a dump stat for offensive units and Speed for slower units that could use skills that grant guaranteed follow-up attacks. Whether or not a dump stat even exists anymore depends on both the unit and the context/mode in question.

For PvE modes, Arena, Arena Assault, Allegiance Battles, and Mjölnir’s Strike, it could be argued that there are pretty definitive dump stats for most units. The argument that offensive units can dump HP, Defense, or Resistance still holds true unless the player wants said unit to endure several hits on Enemy Phase. This is because offensive units want to invest as much as possible into Attack and Speed to make their damage output and follow-up attacks more consistent. Weapons and skills that prevent counterattacks or allow units to perform their follow-up attack before the enemy’s counterattack such as Firesweep weapons, Dazzling Staff, and Desperation also make bulk less of a priority for offensive units. Unless for a Speed-investment meme, slow units such as Sophia can usually dump Speed as well (since they can rely on their bulk and/or guaranteed follow-up attacks), with the exception being units that have mediocre, but still salvageable Speed such as Idunn (these units can invest in Speed to become strong well-rounders).

Once again, it seems like a dump stat really does exist for most units until we start talking about Aether Raids.

Because of the reasons mentioned in the previous Aether Raids section, a lot of units can’t afford to not invest into a stat at all; at least, on Offense. Exceptions are usually very slow units like Sophia and Fallen Lyon that rely entirely on their damage, guaranteed follow-up attacks, and bulk to carry their teams to victory. Those aside, most units want to invest into all of their stats as much as possible, even if a stat is pretty low at base.

Valentine’s Alm’s Resistance is clearly his lowest stat, so why invest into it? It wouldn’t make sense to invest Speedwings into a really slow unit in normal Fire Emblem games because it would rarely make a difference (if ever), so what makes this different? The Aether Raids Defense meta is what prevents supertanks such as Valentine’s Alm and the plethora of Speedy Infantry melee units from simply cutting their losses with their Resistance. Mages such as Lysithea, Fallen Julia, Ophelia, Legendary Celica, Thrasir, and Bramimond run rampant in Aether Raids Defense due to their fantastic damage output, personal weapons/skills, and ability to gain Special charge through their weapons, skills, and/or teammates’ Infantry Pulses. Staff units are also fairly common, whether they be on Restore trap teams that intend to catch careless players off-guard or Cavalry Line teams that suffocate and punish players for having too many offensive structures to escape their units’ ranges. As such, supertanks need to invest into their Resistance to prevent them from being nuked by these units, making Resistance an unviable dump stat in Aether Raids Offense.

As for Aether Raids Defense, dump stats are usually more acceptable since units usually play only 1 role as opposed to multiple roles like supertanks play.

More than anything, determining the importance of IVs and the existence of dump stats depend on the unit and context. Some units care more than others, Aether Raids Offense demands investment in all stats more than any other mode, and some players may just want to optimize their favorite units.

Hopefully this guide helped! I really appreciate any constructive feedback or other perspectives, so feel free to send any. Thanks so much for reading, and have a good day/night! ^^

Chibi_Chu
Hey there! I'm Chibi, a Fire Emblem Heroes Gamepress writer. Along with Fire Emblem, I'm also pretty into Pokemon, Kingdom Hearts, Ace Attorney, Danganronpa, and Dragalia Lost. That aside, hopefully whatever I end up writing helps, and have a good day/night! ^^