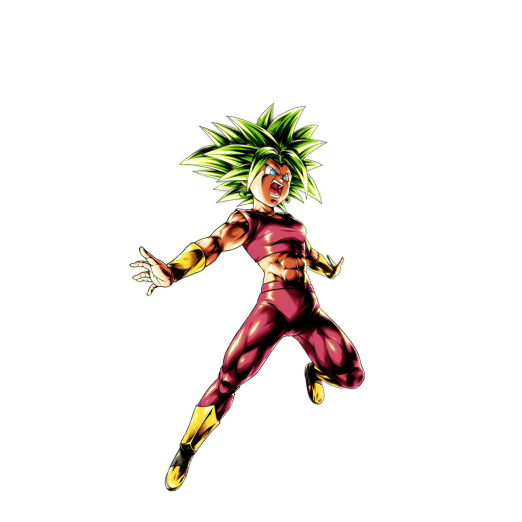 Thanks to ZvG for the video

This Fusion Warrior from Universe 6 has nothing but winning on her mind, and possesses a devastating toolkit that proves she has the skills to back up her arrogance. SP SSJ2 Kefla GRN is a Fighter that fits into a specific archetype that DBL veterans are likely to be familiar with, the fragile, Blast Armor Melee Type.

Kefla leverages the innate Blast Armor her Strike Arts possess to gain an edge in neutral situations, and her entire kit is devoted to making that playstyle as overwhelming and frustrating to play against as possible. Her Unique Abilities offer benefits in exchange for taking Damage and ensure that her Combos are long and impactful.

Kefla even has the power to Support her Teammates; this is a totally broken piece of utility on a Fighter this Offensively geared.

Perhaps the most threatening thing about Kefla is her ubiquity. She fan fit seamlessly on many prominent Tag Teams, and the preponderance of Support Fighters on those Teams can make her absurd Offensive prowess game-winning in an instant.

No one is getting off of Kefla's Wild Ride

Kefla's kit could not be more complimentary for her playstyle. Each of her Strike Arts possess the ability to Buff her Strike Damage by 25% for 10 Timer Counts each timer they're initiated, which is incredible alongside Blast Armor.

When this is combined with her permanent, uncancellable +1 Card Draw Speed, her permanent +30% Inflicted Damage, and her innate -5 Strike Arts Cost, she can string together brutally long Combos with Damage scaling off-set by Kefla's stacking Buffs.

The beauty of this effect package lies in its consistency. All of these effects are active from the moment the battle begins and if Kefla is chosen to lead her Team, she will switch her opening hand's Blast Arts to Strike Arts with her conversion effect on entrance.

Speaking of her potential as a Team leader, Kefla sports a Support Buff, a 25 Timer Count long +20% Damage Inflicted Buff for Female Warriors, Fusion Warriors, and Universe 6 denizens that activates whenever she sustains Damage.

If Kefla loses the first exchange of a Fighter, her Team is Buffed when she's switched out. If she uses her Blast Armor to charge through a foe's attack, her Team is Buffed. There is just no losing with Kefla, which is certainly consistent with her characterization.

Kefla's 20% Sustained Damage Cut and her ability to heal 20% of her Sustained Damage after a Combo mitigates the sting of tanking a Blast Arts head on, and keeps her bulk passable throughout the fight.

The End of the Game

Kefla never lets up, no matter what state the game is in. Once 25 Timer Counts have passed, Kefla can pop her Main Ability to essentially guarantee a kill. The Ultimate Arts Card it draws, Gigantic Blast, shreds through all Sustained Damage Cut effects and negates Endurance. It even has a 30% chance to Faint if all else fails.

What makes this Ultimate Arts terrifying to face is the fact that the Main Ability it's attached to restores Kefla's Ki by 50 and increases her Inflicted Damage by 40% for 20 Timer Counts. When active in concert with her Card Draw Speed, it's hard to imagine that this ability can set up for anything less than a fatal Combo.

Kefla's permanent Offensive Buffs and scaling Strike Arts let her excel in late-game situations. The ease with which she can begin Combos is particularly noteworthy, considering her Blast Armor.

While her Offense is peerless, Kefla has some serious Defensive problems. Her Sustained Damage Cut and marginal Healing are helpful, but they're not enough to make up for her very low base Health and Defensive stats.

This is a somewhat minor weakness, but it is undeniable that Kefla's Combos are predictable. In most match-ups this won't be a problem, but against Fighters like SP Super Vegito PUR and SP 1st Form Frieza PUR, who can negate Strike Arts when changing cover, Kefla's wings can be clipped.

What is especially dishearting is that both of these Fighters are Purple, meaning Kefla can very quickly be torn to shreds by their Arts with pursuit. Combo dropping is very important with Kefla in general, and it's especially important in the aforementioned match-ups.

Kefla integrates onto the Fusion Warrior core perfectly, replacing the underwhelming SP Super Gogeta GRN. Her Support and potential as a lead gives her a clear place and role on this Tag. She essentially needs to be run alongside SP Vegito YEL, as he compliments her Element and makes up for her Defensive deficiencies.

SP Super Vegito PUR, Kefla's nemesis, is a wonderful Teammate for her. His Buff dissipation effect helps Kefla clean house in the endgame.

SP SSGSS Vegito BLU and her don’t necessarily have synergy color-wise, but the sheer Damage output these two can put out is astounding. When one seemingly never-ending Combo forces a switch out, the other can act as an Offensive pivot and keep it going.

A must-have Equipment, providing Kefla with HP and a large Base Strike Attack Buff.

Awakened Quit playing around! No. １

This Equipment is also a must-have, further increasing Kefla's base Strike Attack as well Buffing her Ultimate Arts.

Please note for the optimal Fusion Warriors Team, this Equipment is replaced by Alright!! or alternatively Mind Your Own Business, Tin Men!.

A Pure Strike Attack is vital for this one dimensional Strike-based Fighter.

SP SSJ2 Kefla GRN's wealth of Tags gave her a lot of team options, but she is being power crept.

SP Super #17 GRN doesn’t buff the Tag, but he’s still vastly superior to Kefla at this point, dropping her to Tier 2. SP Gotenks GRN is also preferred on the core over her.