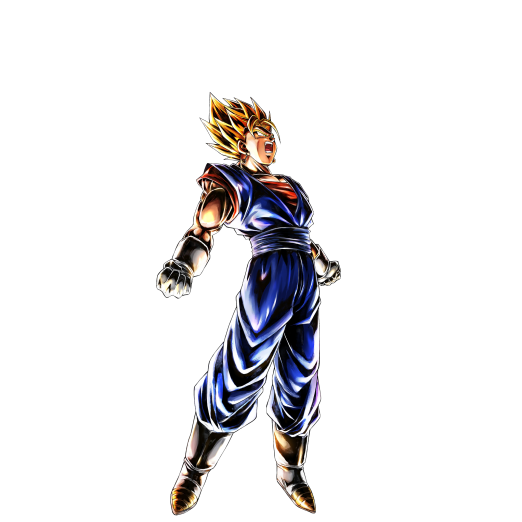 Super Vegito is as linear as he was when he first ruled the meta, he has incredibly Damage output the longer he’s out on the field due to him needing to draw Arts Cards to gain most of his buffs but he doesn’t offer much in the form of defensive utility outside of his Strike Cover change.

Nevertheless, SP LL Super Vegito PUR is a force to be reckoned with in the PvP meta as he can obliterate the opposition easily, and his Main Ability -” Come On, Give Me All You’ve Got” can change the tide of battle in your favor effortlessly as it’s one of the best Main Abilities in the game.

Everybody Gangsta Till the Buffs Start Stackin

SP Super Vegito PUR's Fighter Identity is completely fixated on Buffs. Upon entering the field, he is greeted by a 40% Damage Inflicted Buff. This is something most Fighters without a facsimile effect envy, but it's far from Vegito's only way to get Damage.

Vegito gets Buffs that correspond to the Stat that affects the Damage of Cards he Draws: +20% Strike Damage per Strike Card, +20% Blast Damage per Blast Card, and +20% Special Move Damage per Special Arts Card.

If that wasn't enough, he receives +10% Inflicted Damage whenever his foes use an Arts Card. In common scramble situations, it's expected for Vegito to reach well over +100% Inflicted Damage from some combination of the aforementioned Buffs.

He now draws a card on entry if you have 3 or fewer cards in your hand and he also has access to Card Draw Speed and Ki on entry which synergize perfectly with his need of drawing Arts cards.

Needless to say, even as a Crisis Fighter, his Damage is substantial thanks to his constant stream of Buffs.

On top of his ludicrous amount of Damage Buffs, he can self-Heal and increase Card Draw Speed through his Main Ability, which is always good to have on hand.

It can also Cancel Enemy Attribute Upgrades, which will single-handedly shut down Fighters that rely heavily on stacking multiple Buffs.

While odd in combination with the rest of his Abilities, Vegito's Extra Move takes care of his Defensive needs. It grants an appreciated +20% Sustained Damage Cut, Immunity to all Status, and two nice stacks of Ki Recovery top it all off. These Effects in concert with everything else equate to a Fighter with no clear faults.

SP Super Vegito PUR deals additional Strike Damage against Regeneration, making him a dynamo given the current state of the Meta. His already impressive Damage is ramped up significantly against enemies of the Tag, and his Buff Removal Utility can spell a quick death for some of its bulkier Fighters.

Despite his increased Damage against the Tag, he's often the underdog in match-ups against its Yellow roster.

With his Zenkai Awakening, SP LL Super Vegito PUR now has support unique in his toolkit. Whenever the enemy uses an Arts Card, Vegito gives his allies 10% Damage inflicted for 15 timer counts. This is useful as normally you’re going to switch out of Super Vegito if he starts to take too much Damage and then that Fighter will be even more powerful with the support given by Vegito.

While he can potentially gain mountains of Offensive Buffs, that normalize his Damage output, at base his Blast Attack is lacking. It isn't too far gone to be useful, but Vegito's overall Damage will suffer if he is isn't used on a Team with a primary Strike focus.

SP LL Super Vegito PUR takes quite a bit for him to be at the level that most Fighters are at instantly nowadays. They gave him an extra  30% Damage Inflicted increase once the battle starts which is fine but not up to par with Fighters released recently.

This is where Super Vegito belongs. He provides his Team with Strike Cover Support, overall insane Damage Output, and Buff removal, while it provides him with Fighters that complement his strengths and supplement his weaknesses.

SP Super Vegito PUR is a solid option on this Team thanks to his sheer Offensive power, however, his Defense falls off when he's not paired with Fusion Warrior allies. SP SSJ Bardock BLU might be is fantastic support with his Critical Hit Rate and Critical Damage Buffs that crank Super Vegito's immaculate Offense into high gear.

As mentioned in the Overview, SP LL Super Vegito PUR’s Zenkai Awakening has now brought forth a new meta-defining team, Mono Purple. This team has some of the highest Damage output in the game due to the over-stacking of Zenkai Benches. Alongside SP LL SSB Goku and Vegeta PUR and either SP SSB Vegeta PUR or SP SSJ Youth Gohan PUR, this team is one to be feared as it can completely dismantle the best teams in the game with ease and YEL Fighters are nothing in front of SP SSB Goku and Vegeta YEL once Vegeta enters the battlefield.

This is a great Equip for Super Vegito, providing a massive Base Strike Attack Buff as well as Base Blast Attack.

This is Super Vegito!

His exclusive Equip has finally arrived and is a must-have on Fusion Warrior Team Compositions. On Non-Fusion Warrior Comps, other Pure Equips can be used to double down on Vegito's Strike Attack.

A HP Equip is recommended on every Fighter due to the large increase in survivability. In addition, this Equip provides additional DMG to Hybrids to help Vegito deal with pesky Fighters such as Zenkai SSJ2 Gohan (Red) and Sword of Hope Trunks.