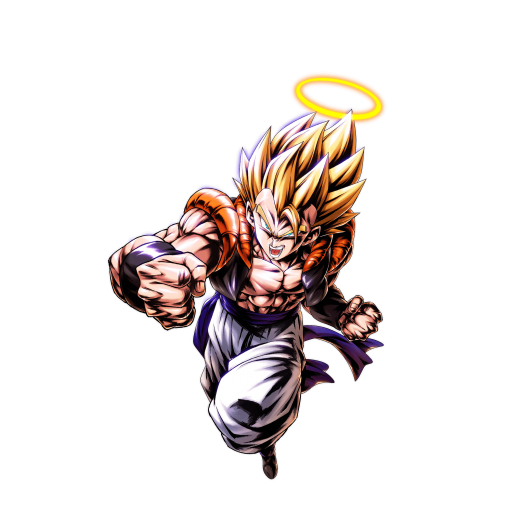 SP Super Gogeta GRN is an excellent and appreciated addition to the Fusion Warrior Tag, which has languished without new arrivals for some time.

Luckily, Gogeta provides a strong Green option for the Tag, and he also functions as a prime counter Fighter against one of the most prolific, and understated, Tags in the Meta, the Transforming Warrior Tag.

While Gogeta struggles a bit Defensively and joins two primarily Strike-Focused Tags (Fusion Warriors and Sagas Warriors), as a Blast-Focused Fighter, his toolkit is strong enough to be useful in certain match-ups.

His Crisis utility will at least enable him to make an significant impact when it matters. Enough Fighters exist on both of his main Tags that can bridge the gap for Gogeta, who needs to be on a Team conducive to his playstyle to truly excel.

SP Super Gogeta GRN has a nasty permanent Damage Buff against Transforming Warriors, a Tag that encompasses key members of a surprising amount of Teams. Lineage of Evil, Sagas From the Movies, Regeneration, and even Female Warriors all use Transforming Warrior Fighters, giving Gogeta the edge in an insane amount of match-ups.

On the Fusion Warrior Team, he can be brought into combat as a counter-pick Fighter when Transforming Warrior Fighters reveal themselves.

Gogeta’s overwhelming Offensive presence gets elevated to a whole new level after 40 Timer Counts elapse. He Heals himself, Buffs his own Inflicted Damage by a flat 50%, and Buffs his Card Draw Speed by 1 Level.

These Buffs are essentially permanent and turn an already oppressive Fighter into a complete monster in the right hands. These Buffs also give him slight Crisis utility, which the Fusion Warrior Tag appreciates. The Sagas From the Movies Tag also enjoys the additional option with Crisis Utility, but this Ability is less felt on that Tag.

Tricks of the Trade

SP Super Gogeta GRN packs some unique Card effects that give him some serious neutral advantage. Gogeta's Extra Arts Card, the Rapid-Fire Fist, completely shuts down enemy Strike and Blast attacks thanks to its Blast Armor and Immobilizes the enemy for a moment - opening them up to a devastating Combo.

He can leverage any hit he lands with his Main Ability, which not only gives him a Special Arts Card and the Ki to use it, but also significantly augments his Special Move Damage.

One of the most incredible things he brings to the table is his second held Arts Card. It is a Blast Card, so not every Fusion Warrior appreciates it in the mix, but it packs a secret. It grants a flat +10% Inflicted Damage Buff to the Fighter using it, allowing for greater Damage over time.

This is a Strike World

While this is not an explicit fault of Gogeta’s kit, he is a Blast-oriented Fighter whose two primary Tags each have a Strike-oriented game-plan.

To make matters worse, Gogeta's Strike Damage output is utterly mediocre. His Blast Attack is second-to-none, but he needs Blast Cards to showcase his Abilities adequately. This issue is compounded when he is fielded alongside Strike-oriented Fighters.

Can Dish It, but Can't Take It

SP Gogeta GRN’s bulk in most circumstances is wanting. He requires his Sustained Damage Cut Buff from his Extra Arts Card to take hits well, and though he does Heal himself after 40 Timer Counts, that automatic Heal only makes an impact if Gogeta is carefully played.

SP Super Gogeta GRN gets fantastic Crisis Buffs as his Allies fall, but those Buffs are visible, which hampers him in match-ups against foes that can remove Buffs. If Gogeta's Buffs are removed, he essentially loses on the spot.

This Tag was begging for some new blood, and Gogeta is exactly what it needed. Not only is he a fantastic option to have around to ease the Lineage of Evil match-up, he is also an actually usable Green Fighter who contributes to the party’s Ability Bonus.

Bridging the gap between the Strike and Blast-oriented identities of this Tag's best Fighters is SP Vegito YEL, whose peerless, multifaceted Offense synergizes perfectly with a Strike or Blast Card rich deck. His existence on this Tag makes it much easier to accommodate SP Super Gogeta GRN.

SP Vegito RED is an excellent partner for the Evil-Banishing Fusion, as Gogeta easily wards off enemy Blue Fighters with his peerless Blast Offense.

SP Super Gogeta GRN fits well on Sagas Warriors Teams as the Tag’s best Green Fighter, but his Blast-focus hinders him somewhat. Despite this, his prowess in neutral situations and his fantastic toolkit otherwise make him an easy fit onto this Tag Team.

He appreciates the Buffs provided by key Offensive Supporters like SP Full Power Boujack PUR and SP Hero Tapion RED, who significantly ease his Strike Damage struggles. Additionally, the strength of SP Broly: Cheelai BLU is not significantly hampered by Gogeta's held Blast Cards, and they can provide Goteta with Extra Arts Cards and accelerate the Team's win condition.

Super Gogeta is held back by his Z-Ability on this Tag, which only buffs Blast Attack for it at 6 Stars, but it does contribute to the Team’s overall Damage so it’s not to be overlooked on Sagas Warriors Benches.

On Saiyan/Super Saiyan Teams, SP Super Gogeta GRN can put in serious work as a tech choice or a mainstay core Fighter, assuming he is Supported properly. SP Super Saiyan Bardock BLU can Support Gogeta's already impressive Damage, as well as assist his gameplan with his Mixed Arts Cards.

Thanks to his held Blast Cards, Gogeta functions swimmingly with the Blast-based Zenkai 1 SP SSJ Goku RED. SP Angry Goku BLU is of course an absurdly good choice to pair with Gogeta, not only because of his similar playstyle, but also because of his Defensive and Crisis Utilities that let the Team stay stronger longer.

More or less the same Equip as above.

This helps with his subpar Defenses and still gets him some solid Blast Attack, if it's rolled in the last slot.

SP Super Gogeta GRN starts off the Match with 50% Blast Damage inflicted, then gets some huge Buffs after 40 timer counts. Still, his stats are a bit on the lower side and he’s not overly impressive until 40 timer counts.

Even more unfortunately for him, SP SSJ2 Kefla GRN and SP Gotenks GRN are way better on the core of Fusion Warrior.