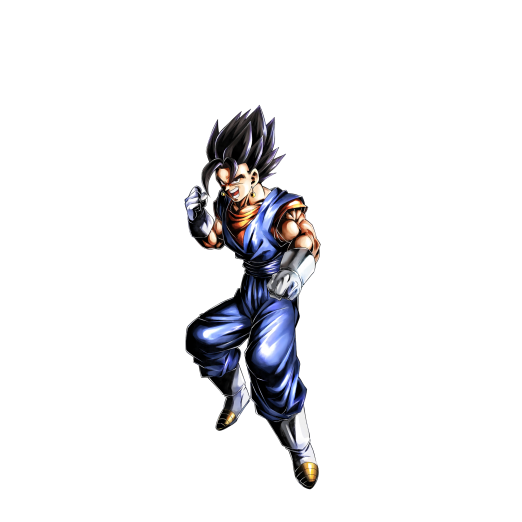 “All right!” - he screamed at the top of his lungs, just moments before making Majin Buu his personal punching bag at the end of the Majin Buu Saga. After a year of the global game launch, one of the most popular characters in the series, Vegito, finally joined the battle, and as a free farmable Fighter at Sparking rarity on top of that.

While this variant of Vegito only existed for about 3 panels in the manga, SP Vegito RED thrives in drawn-out bouts thanks to his fantastic Defenses and combo potential.

Vegito is a simple Strike-oriented Fighter with solid Defensive Utility for the early portion of a fight, and some time he shifts to a Combo-fiend with extra Damage and Ki Recovery. The Crown Jewel of his Kit is a 10 Timer Count Switch Lock on command with his Main Ability, which comes packaged with a huge self-heal.

Nowadays, he is mainly used for his Z-Ability, which is arguably the best in the game. His Combat prowess has proven to be insufficient, as his low Damage prevents him from excelling.

Early on in the Match, for 30 Timer Counts, he’s able to take a direct punch thanks to his very high base Defense stats and Unique Ability, which heals him for about 10% Damage taken after a combo. His Strike & Blast Arts Cards have their costs reduced by 5 for the same amount of time, enabling him to combo very economically.

After 30 timer counts have passed, his playstyle completely changes, becoming more Offensive. He gains permanent Buffs, +30% to Damage Inflicted, +35% to Ki Recovery and +1 to Arts Card Draw Speed, letting him slowly drill through the opposition with agonizingly long Combos.

His Main Ability locks the foe's Ability to Switch Fighters for 10 Timer Counts, which is extremely potent when used right. Paired with his Unique Ability “I’m Finally Getting Warmed Up”, turns SP Vegito RED into a swift assassin to protect his Teammates from a problematic Yellow Fighter or set an ally up for a guaranteed easy match-up for the same amount of time.

This is one of the main reasons why he makes such a great pair with his Purple counter-part, the brutally Offensive SP Super Vegito PUR.

At 5 stars, SP Vegito RED gains a double Z-Ability for Fusion Warriors, and a Strike Attack Buff for Vegito variants, making him the first Fighter ever in the game to provide three Z-Ability Buffs.

This magnificent Z-Ability is sure to keep him on Fusion Warrior Cores for as long as the Tag is Supported.

While his Main Ability, Extra, and Special Moves are great for staying alive and gaining control of the Match, his lack of any self-Buffs outside of one of his Unique Abilities can at times leave him with mediocre Damage output against Enemies with high Health and Defense stats.

This is particularly troublesome in earlier stages of the Match, before his permanent Buffs kick in.

Like all Fighters with visible permanent Buffs, SP Vegito RED flounders against Fighters with Buff removal effects. Without his Offensive Buffs, he's a veritable wet noodle, ironically giving him a horrible match-up against his Super Saiyan variant.

This Vegito acts as a primary Defensive Fighter and Red Fighter for his Teammates, taking one hell of a beating for them. His lock-in Ability is also perfect for either protecting SP Super Vegito PUR from Yellow Fighters or locking in Enemy Green Fighters and switching to his Purple counterpart in order to protect SP Gogeta BLU.

The Offensive power of SP Super Gogeta GRN works well with Vegito, as his high Damage can blow away the Blue Fighters that make his life difficult.

SP Vegito RED naturally fits very well on any Tag Team that can accommodate both him and his Super Saiyan counterpart, SP Super Vegito PUR. On Saiyan squads, the two can be used as a brutal Offensive and Defensive Strike-oriented core. HE Shallot LGT, SP SSJ3 Goku GRN, and SP Bardock YEL all function as excellent partners for the brick wall fusion, giving him ample opportunities to abuse his Switch lock.

SP Vegito RED is very durable whether he has his Defensive Unique Ability active or not, so the extra Health is excellent here. Extra Damage to Hybrid Saiyans can also see usage in the current Meta. While he isn't a Blast-oriented Fighter, his Damage Buffs are non-specific, so the Blast Attack Buff provided here is stronger than it lets on.

This is quite possibly the most fitting Vegito equip option in the game - it's Strike Damage pure Buff is excellent on Fusion Warrior Set-ups, which is where SP Vegito RED spends most of his time.

The Added Strike Attack and Critical really shoots up Vegito's Damage output and the high Defensive boost this equip gives lets him stay in the fray longer.

SP Vegito RED is pretty straightforward, he takes a few moments to warm up and then begins his Offensive assault. Despite the 30% Damage inflicted Buff he receives after 30 timer counts, his base attack stats aren’t great so he can struggle to do Damage at times.

At this point, he’s a tertiary choice for Fusion Warrior behind SP SSJ Gotenks RED and EX Gogeta RED.