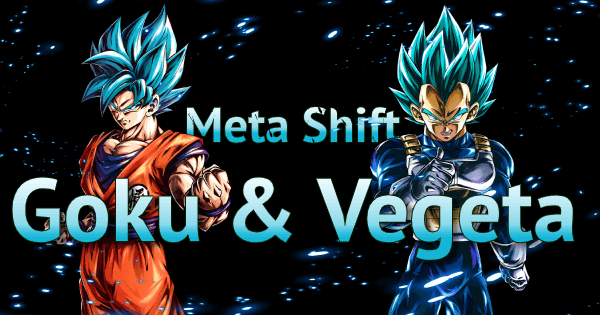 In what is most likely is the last Banner of this controversial Anniversary, new SSB Vegeta and SSB Goku variants make their debuts, representing their fight against Goku Black & Zamasu. This is a really interesting choice from the developers, since they allegedly strengthen a Tag that already got an immense Boost from the Anniversary Step Up.

Either way, their Z-Abilities make them good fits for their respective families as well, so let’s see how the new entries shake up the Meta.

The strongest Tag deserves to be mentioned first, let’s look at the new Fighter’s competition here. SP SSB Goku RED has to be better than SP SSR Goku Black RED to have a spot on this Team, which isn’t a really hard task given how the latter’s Support became worse over time (since multiple units can remove Debuffs) and his overall toolkit is also lackluster. In comparison, SP SSB Goku RED not only packs an impressive Strike Based toolkit that makes him a consistent Damage Dealer, but he’s also a pretty decent Combo disruptor thanks to his Cover. All in all, at equal stars the new Goku is surely a better choice, but there is a real chance you have a 10* SP SSR Goku Black RED after this Anniversary and Red isn’t really a needed Color, so while the former makes the Team slightly better, he’s not a must by any means.

SP SSB Vegeta PUR is more interesting. While SP Merged Zamasu PUR didn’t need to be replaced, Vegeta boasts an impressive Supportive toolkit  that makes SP SSB Vegito BLU even more unstoppable. With Vegeta on the Core, Future’s playstyle becomes very similar to Fusion’s. While SP Merged Zamasu PUR is more of a control Fighter thanks to his Cover and mid-late Game Buffs. It also depends on your playstyle, but if you have a high stars Zamasu you probably don’t need to pull for SP SSB Vegeta PUR.

This is where SP SSB Vegeta PUR takes flight. If your SP Teen Trunks PUR doesn’t have excessively high stars, even a 3* Vegeta is most likely enough to replace him. Shortly put, his Support is flat out better and the Death Effects are the cherry on top. While SP Teen Trunks PUR can probably hold his own slightly better than him on the field thanks to having better Stats all around, Vegeta’s higher effectiveness as a Support definitely makes him a better choice in a Team full of great Fighters as this one.

The only thing that might look bad is Zenkai 7 SP Youth Trunks BLU’s situation, since he’s primarily a Strike based Fighter and the Deck is mostly Blast Focused, but this Team offers enough Support that it might not feel like a big issue at the end of the day.

Overall, Vegeta Family is finally an excellent Team with no particular flaws.

SP SSB Goku RED replaces SP Kakarot Goku RED here ( although the latter remains on the Team thanks to his Health Z-Ability ). The two of them are actually really similar, since they both are great Melee Fighters with momentum swinging Extra Moves, however the new Goku just does things better, as he’s a better Fighter early and his Cover makes him more versatile. In any case, it’s hard to define him as a Game Changer for Son Family, since a Red Fighter won’t help it against Vegito Blue Teams.

In any case, SP SSB Goku RED flows pretty smoothly with the rest of the Team, specifically SP Kid Goku YEL and SP Saiyan Saga Goku BLU are perfect partners for him.

It’s also safe to say that he’ll be relevant long term thanks to his great Son Family Z-Ability, a rare feat in this context.

So, the new Fighters are pretty impressive, especially SP SSB Vegeta PUR, but if you went all in on the Anniversary Step Up ( and you most likely need ) you don’t need them that much.

Now, let’s take a look at the … fillers. Whoops, I’ve hyperlinked the wrong Banner, let me try again… aah much better! I was worried the developers only filled this Banner with irrelevant Future Fighters, that looked too bad to be true. Instead, we’re blessed with the likes of Rage Vegeta and OG Kaioken Goku too, so this is a golden opportunity to experience a type of nostalgia only Dragon Ball Legends can generate!

Jokes aside, the only Fighter you might really need from this banner is SP SSB Vegeta PUR for your Vegeta Family Team, which translates to chasing a 1% chance.