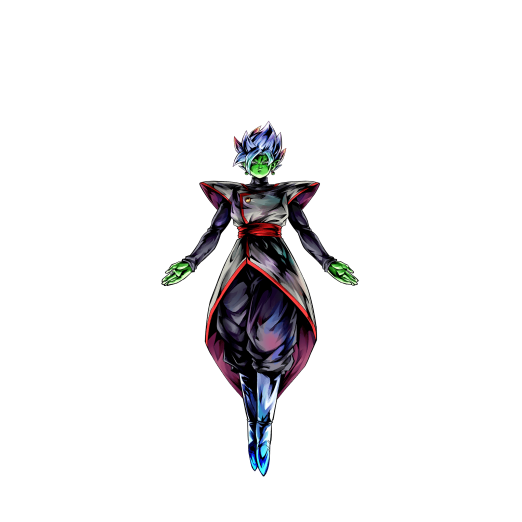 Many expected SP Fusion Zamasu PUR to be an insufferable Tank Fighter, but he actually arrives in the form of a devastating Offensive Fighter, with some aspects in his toolkit giving him excellent sustainability and allow him to function as a defensive pivot.

Defensively, he has a multitude of Heals as well as two variants of Cover, one against Strike Attacks and a traditional 40% Sustained Damage Cut that triggers against all other Arts.

SP Fusion Zamasu PUR should hover among some of the best Fighters in the entire game for quite some time, as he does just about everything for his multitude of Teams.

SP Fusion Zamasu PUR gets Buffs that can't be canceled as the match progresses, and given his survivability and his strong Team options, this is a negligible condition.

Only 15 timer counts need to pass for his 40% Damage inflicted Buff -- which is good enough as it is -- but at 30 timer counts he also gets a permanent +1 to card draw speed. At 50 timer counts, he reduces all arts card costs by 5, resulting in Zamasu becoming a brutal combo artist.

To ensure that his Damage is consistently fantastic, he also possesses a +30% Blast Damage against all non-Zamasu or Goku Black variants, ensuring he will always be able to put dents in foes that oppose his Zero Mortals Plan.

SP Fusion Zamasu PUR's Damage Buffs are excellent on their own, but are really accentuated by further Buffs that stack as he takes punishment.

Attacking SP Fusion Zamasu PUR gives him more monstrous Buffs, 20% Damage inflicted for each one all the way up to 80%. This ability synergizes fantastically well with his Defensive nature, especially his 40% Sustained Damage Cut on cover.

Akin to the anime, any Attack vs SP Fusion Zamasu PUR needs to be as meaningful as possible, as he'll only come back more powerful than anyone could possibly imagine.

Both of the Tags he Buffs with his Z Ability -- Future and God Ki -- are rich with some of the best Fighters in the game. Not that he needs anyone to make up for him, but being alongside Fighters like SP SSB Vegito BLU,  SP SSB Vegeta GRN, and SP SSJ Rage Trunks YEL ensure he will stay on top for a very long time.

The Buff he grants to the Powerful Opponent Tag with his Z Ability will guarantee his staying power as the Tag receives more members, and because that ability stacks with Zamasu's dual Buff to Future and God Ki, Zamasu essentially grants himself a 43% Buff to Blast Attack.

It's hard to find a glaring issue with this Fighter, but the first 15 timer counts of a Match do feel a bit sluggish, as his primary Damage Buff activates right after that. His nearly unconditional +30% Blast Damage Buff helps this somewhat, but he still needs to wait a bit before he can dominate Offensively.

Even with their relative age, SP SSB Vegeta GRN and SP Super Saiyan Rose Goku Black RED are solid Fighters that will not slow the Team down at all.

More or less the same Team as above with the exception of SP SSJ Rage Trunks YEL. While it's a big loss, God Ki does have quite a few options for this spot. SP GoD Beerus GRN for example is still around and among some of the best Fighters in the game

A bit of an unconventional Team as he doesn’t Buff the Tag, but he is certainly leaps and bounds superior to SP Super Vegito PUR as a Fighter.

Yet another somewhat unconventional Team for him as he doesn't Buff Regeneration, but he does Buff Powerful Opponent which many Regeneration Fighters also share.

Worship me! Give praise unto me!

This is the only Pure Blast option for Zamasu on the Future Team currently making it a must-have for this Ranged Fighter.

This is a great Equipment for SP Fusion Zamasu PUR since it greatly increases his survivability, allowing him to last until the very end of the match where he is most potent.

He's mumbling to himself in fear.

This choice increases SP Fusion Zamasu PUR's already powerful Blast Attack and further increases his survivability with a Buff to both of his defences, and most notably, a Pure Buff to his Blast Defense.

SP Fusion Zamasu PUR can greatly benefit from this Equipment since it gives a large Buff to both of his Defences, increasing durability, while also applying a Pure Buff to his Strike Attack.

The longer the Match goes, the stronger SP Merged Zamasu PUR becomes, but only a mere 15 timer counts need to pass for his most coveted Buff: 40% Damage inflicted which cannot be canceled. He pairs nicely with SP SSB Vegito BLU as he protects him from Green Fighters, and both Fighters have a form of Cover to act as a reliable Defensive pivot.

For the time being, it seems like SP SSGSS Vegeta PUR has solidified himself as the primary Purple. SP Merged Zamasu PUR is a little bit more conditional than Vegeta, and Vegeta also pairs a bit better with SP Goku Black GRN