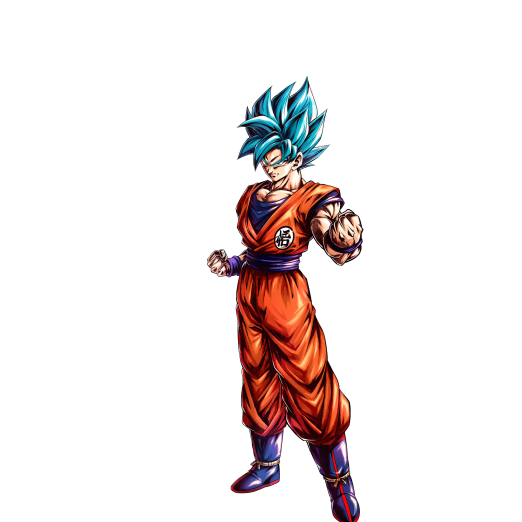 Enraged by Zamasu’s revelations, SP SSB Goku RED is ready to make his opponents pay through his ferocious Offensive toolkit. In fact, Goku’s canonical focus in the scene where we see him take on both Goku Black and Zamasu, translates in a set of Abilities that allows him to both disrupt his opponent’s Combos through an Anti-Strike Cover, and strike back thanks to his excellent Melee arsenal. The unique thing about this SP SSB Goku RED is that he’s the first Fighter in a long time to provide a great Z-Ability for Son Family, possibly setting a basis for further upgrades related to his family’s Tag in the future.

You'll Pay For This!

SP SSB Goku RED’s toolkit is almost completely focused around making him as strong as possible at inflicting Strike Damage. Specifically, he starts off with 90% Strike Damage Buffs, he has a Melee based Special Move and his Extra Move is one of the best in the Game, since it provides him of permanent Arts Draw Speed, gives him 50 Ki, greatly strengthens his next Strike Card/Special Move and also transforms his harmless Blast Cards into Strike ones, so it’s fair to say that this Goku constantly has the tools needed to be a competent Damage dealer for any Team he fits in.

You Can't See Me

Goku’s Anti-Strike Cover is very useful in the current Meta, specifically against Fusion Teams. While this trait isn’t really new for Future, it really comes in handy for Son Family/Goku Team, who could only limit Strike Combos through mitigating Damage.

There is also a bad side to this, which is him being Red, so if he Covers to a Blast instead and the opponent has SP SSB Vegito BLU available,  Goku is almost certainly going to die. For this reason, his Cover should be used carefully.

I'm Not Going Down

Goku is quite long-lasting in a Match, even if his first Offensive Buffs are tied to the quantity of opponents being alive. In fact, he also gets Buffs from his allies dying, so unless it’s a 3 vs 1 situation ( and in this case it probably doesn’t matter how many Buffs SP SSB Goku RED gets ), Goku is constantly able to get 60/90% Offensive related Buffs.

While SP SSB Goku RED has various means to produce Damage, this doesn’t cancel the fact that his Blast Damage is just pitiful. This kind of restricts him to being paired with Fighters that hold Strike Cards for the most part and even then, there are instances where Goku has to use Blast Cards and the results are just shameful for a post Anniversary Fighter.

Released at the Wrong Time

While being Red doesn’t necessarily make Goku bad since he has a great toolkit nonetheless, getting released when SP SSB Vegito BLU presumably is at his absolute peak is just unfortunate, since it decreases SP SSB Goku RED’s potential impact in many matchups.

He might not coexist well with SP FP SSJ4 Goku GRN due to the latter being Blast Focused, but the rest of the Team is a good fit around SP SSB Goku RED and magnifies his Strike proficiency. In particular SP Kid Goku YEL is his best partner overall.

He synergizes very well with SP SSB Vegito BLU, as together they make a very powerful Melee combination. He replaces SP SSR Goku Black RED on the Team.

A Pure Strike Equipment is a must-have for this Strike based Fighter. This is the optimal Equipment for the Future Team, providing Goku with a large Pure Strike Buff.

Please note for the Son Family Team, It's All You, Gohan! is the alternate optimal Equipment. In addition for the Saiyan Team, Come on! Let's keep this fight going! is recommended. Bear in mind that there is currently a lot of overlap between these Teams, so these two Equipment may be used to substitute one another.

Similarly, this Equipment is a must-have for a Strike oriented Fighter. There are similar Equipment options here, for example, This is the Kaioken provides very similar Buffs.

As an alternate build, this Equipment may be replaced with Battle of Saiyans to provide Goku with additional survivability.

He does a great job replicating Goku from the anime after the revelations he received from Zamasu. His Main Ability puts debilitating Debuffs on the other team, and draws him his patented Extra Move which increases his card draw speed permanently, increases the Damage of his next Strike or Special Move, increases his Ki by 50 and changes all of his pesky Blast Arts cards to Strike Arts cards.

Unfortunately, SP SSJ2 Gohan RED is the clear cut choice on Son Family, and despite not buffing the Tag, SP Perfect Form Cell (Revived) RED is preferred on Future as well. His Revive mechanic is simply too powerful. As a secondary choice on his best possible teams, he's Tier 2.