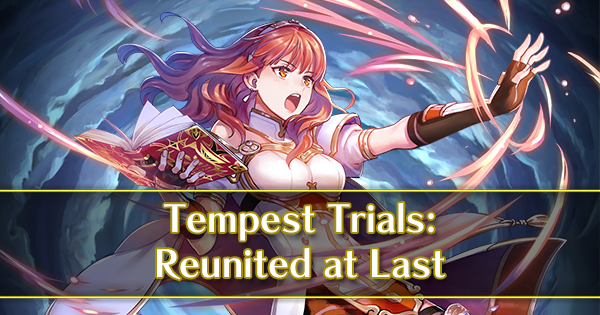 This special event contains a series of maps you must fight your way through from beginning to end. Losing does not mean game over, as you can retry with a second team. Therefore, teams should try and prioritise for speed as well as survivability. There are a few changes this time around, which make the trials easier. The important ones are as follows:

If you include a bonus ally on your team, you can increase your score. If you add multiple bonus allies, only the highest bonus will apply. Bonuses do not stack. Bonus Allies gain stat boosts equal to +10 HP, and +4 to all other stats.

Preparing for the Trials

Before you can attempt the Tempest Trials, it’s assumed that you have a decent pool (at least two of each colour) heroes at five stars, or four stars with a high merge value. It’s also expected that you have a recommended skill build, as some of the fights will be very tough. It’s a lot easier to claim rewards this time around, so although the highest difficulty gives the most points, it is possible to claim the important ones on lower difficulties. Losing a team will not significantly affect your point yield, so don’t stress about losing time. With the triple points bonus at the start of the day, it is very easy to obtain the top seal without excessive grinding.

The first units you’ll want to think about using are of course, the bonus units. With their huge stat bonuses (+10 HP, +4 to all other stats) They will punch far above their normal weight. The F2P options this time around are Berkut and Clive. Both are powerful even at four stars, providing powerful blue options for the team. Celica, Delthea and Sonya are all powerful units, Celica in particular being notable for her Ragnarok tome and type advantage against the final boss. Alm can provide valuable healing, but Gray has a better statline and provides a larger bonus. If you can’t find room in your team for a bonus unit, consider starting with a throwaway team that features one.  Suffering one defeat with a bonus unit will still give you a higher score than if you never used one.

Healers are fantastic in the Tempest Trials, and can single-handedly sustain your team throughout the duration of the run. However, running a healer can compromise your team (unless you can get Wrathful Staff). It’s highly recommended to take a healer for safe runs, but keep in mind that they will slow your runs down compared to more offensive teams. Genny is the best choice due to her utility as a bonus unit and stat boosts.

There are a few types of builds which can be used to heal teams without using a valuable team slot on a dedicated healer. The first of these is the “Falchion Medic”, a build type which requires a user of the legendary Falchion. With Renewal in B slot and Reciprocal Aid as a support skill, this build can provide healing to allies without sacrificing offensive power. Notable units who can pull this off include: Alm, a bonus unit and Masked Marth, who appeared as a free four/five star reward from the first trials. This is a great option for those with the units, but expect a lower amount of raw healing. If you have Linde, you can run a Breath of Life build. The effects from Aura (Linde’s unique tome), Breath of Life, and the Breath of Life seal stack to provide a whopping 15 health to all units around her when she attacks. Make sure to take Reciprocal Aid along with this build, to ensure that Linde herself can be sustained. If you don’t have Linde, the build can be applied to any character, but will only heal 10 HP. Remember that a dancer can potentially double this healing output!

This skill build is amazing for the Tempest Trials, granting a significant amount of sturdiness to a team combined with a strong attacker. These units are capable of defeating many foes in a row without losing much HP, which makes them an idea choice for the trials. At least one unit with this build is highly recommended. The most common users are Robin(M), Sophia, Cecilia, Boey and Spring Camilla. Sophia is especially useful, as she can be used to safely KO Sonya, the final boss.

The triple mage core is one of the most potent teams available for the trials. Celica and Delthea have extreme statlines after their stat boosts, and are capable of carrying the trials entirely on their own. Sonia provides a third mage, but can be replaced with Julia or Nino if necessary. The final team slot is best used on a dancer: Azura, Olivia or Ninian. Breath of Life should be the C skill on at least 2/3 mages, to provide heals for the team.

As a surprise to no-one, Cavalry teams are as powerful as ever during the trials and can be built very cheaply and entirely F2P. Clive is the bonus unit of choice thanks to his superior speed compared to Berkut. However, Berkut can be used before Clive is obtained. Xander is recommended due to his Distant Counter weapon, but Eldigan or Eliwood can be used instead. Cecilia provides the team with a raven tome and a valuable resistance tank. Genny is the healer of choice, but can be replaced with any other healer (mounted healers are preferred), or Falchion medic. Running Breath of Life on the fourth slot is a solid option if they aren’t cavalry.

Another decent team, Clive and Hector can KO most units with Kagero cleaning up mages and grey units. Kagero is the primary unit slayer, and should be running Breath of Life to give some healing to the team. She can run Green Tomebreaker to combat Sonya in the final round. This is a mostly balanced team, but lacks a dancer. Masked Marth is the flex unit of the team and can be replaced by Olivia or even a dedicated healer. Azama is a great choice in this regard, thanks to his high defense and natural access to Pain and Rehabilitate. Mounted healers are also exceptional choices, to provide even more buffs to Clive. 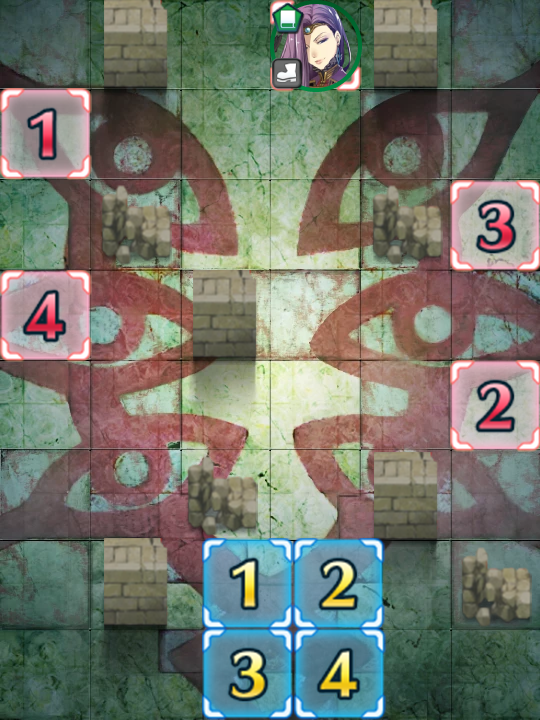 Why have 1 bonus unit when you can have 4? Sure you won't get more points but when everyone has busted stats, the mode becomes a joke.
The roles are fairly basic. Alm for support and some damage; Celica for killing everything; Clive for physical tanking; and Genny for healing, damage, and magic tanking.
I sometimes swapped out Clive or Genny for Sonya for variety (she basically acted as a green Celica).

Each color Killer
Submitted by LesdanGer

Celica and Reinhardt
Submitted by sugoiboi13

All of my support skills revolved around positioning, so keep that in mind. I ran 3 repositions (on Julia, Reinhardt, and Ryoma) and one Swap on Celica. My Celica unfortunately has a -Spd IV, so I ran Quick Riposte 2 on her to cope with that. Keep in mind that this is a non free-to-play team (meaning that ALL units must be summoned.) My Julia has a Breath of Life seal as well as Breath of Life 3 in order to have passive healing of 10 HP when she attacks near any allies, which greatly helps extend longetivity of this team. Key skills necessary to run are Lancebreaker 3 and Death Blow 3 on Reinhardt (and Quickened Pulse if you have it). My Ryoma has Triangle Adept 3 to deal with Sonya in one hit to prevent her from proccing Vantage and destroying the rest of the team. He also has Vantage 3 because lol and Hone Spd 3. Buffer skills are ultimately up to preference, but make sure to keep Breath of Life 3 on Julia.

Brave Axe Frederick and Delthea handle most of the job. Frederick kills most of the blue and squishy green units while Delthea kills what Frederick can't. Masked Marth healer build.

A simple cavalry with berkut the lies man