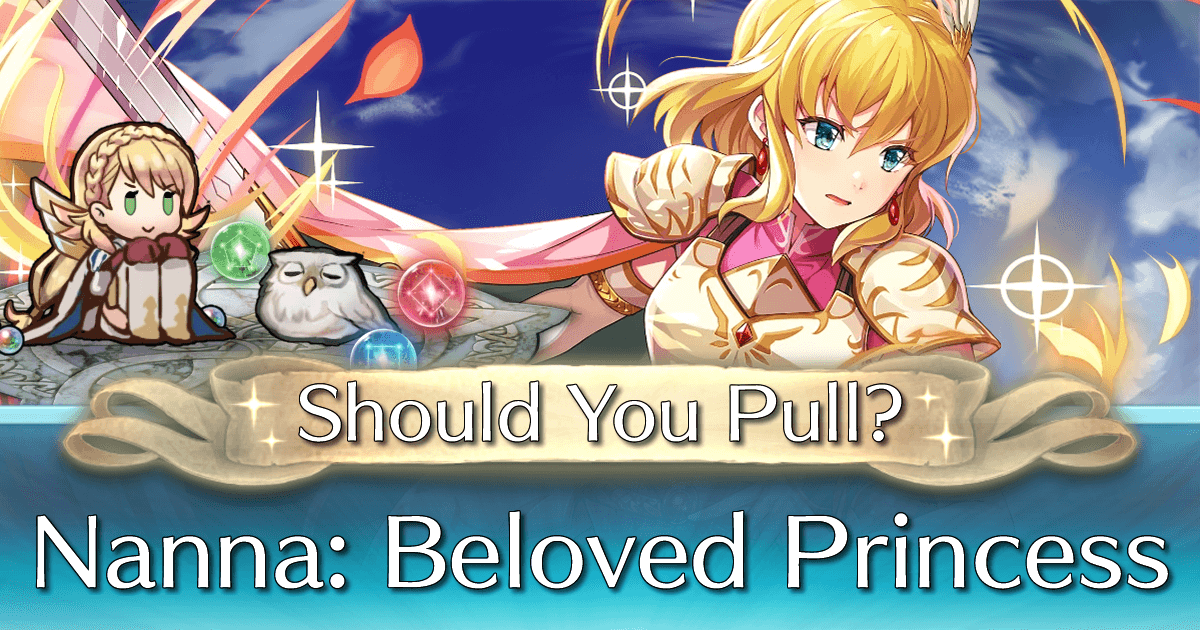 Legendary Nanna is here, surprising many with some powerful unprecedented abilities. But is her banner worth your orbs? Read on to find out.

Legendary Nanna is an Earth Legendary Hero Sword Cavalry with the Pair-Up ability, as well as the ability to provide +3 HP and +4 Res to Earth-blessed Heroes when it is Earth season. She is one of only two Legendary Heroes with both the Pair-Up effect as well as a non-HP boost to allies’ stats, the other being Legendary Caeda. Nanna is an extremely powerful unit, who can ignore essentially all forms of percentage-based damage reduction such as Close Call, Pavise, Miracle, and so on, gains 20% of her Atk as bonus damage, and can also hit with a follow-up attack before her foe can counterattack, provided she is fast enough to gain a follow-up. With these abilities, she can KO most units in Arena before they can counterattack, barring a few blue units with extremely high Def, or with a Triangle Adept-style effect, which is very rare. She also has the ability to move after combat with Canto.

Generally speaking, Nanna has good matchups against all other Earth Legendary Heroes when attacking them on player phase; she can KO some in a single hit and most in two hits before they can counter, even high Def blues like Legendary Tiki and Legendary Fae. They may be able to survive if given adequate support from other units, but in general the matchup highly favors Nanna. Due to these strengths, she is generally one of the most useful Earth legendaries for Arena, with her only major downside compared to the others being that she is a melee cavalry unit, so she can only attack foes adjacent to her, and she is slowed or stopped entirely by some types of terrain common in arena maps: water, mountains, trenches, and so on. Legendary Claude is arguably better than Nanna in these respects, though his combat is not as overpowering, he can initiate from range 2 with his bow, gain huge amounts of damage reduction, and apply Gravity to units adjacent to his target, often allowing him to attack and KO a unit while staying out of the threat range of the rest of the team. But in general, Nanna is an extremely strong choice that is a good addition to most arena teams.

Nanna’s overpowering combat and Canto give her relevance in many modes; she is a strong choice for Summoner Duels that can KO most of the meta units easily, though her Canto does not give her as much mobility as other cavalry such as Brave Eirika or Reginn. Likewise, she is a highly threatening unit when used on an Aether Raids defense team, that can deal huge amounts of damage to most units, though her ability to KO them is somewhat more limited than other modes due to the extreme amounts of stat boosts Aether Raids offense units can receive from their Mythic Heroes as well as other skills like Close Guard.

The red units available this time are Nanna, Legendary Sigurd, and Legendary Lilina. Sigurd is a Wind Legendary with the Pair-Up ability. He is a sword cavalry with the unique Special, Holy-Knight Aura, which grants him the March status, increasing his Mov by 1 at the start of every turn. It also increases his allies’ Mov by 1 when it activates to deal damage in combat. Lilina is a Fire Legendary with the Pair-Up ability. She is a red tome cavalry with a unique Special, Gifted Magic, which functions as a faster-charging and weaker equivalent to Area-targeting Specials like Blazing Wind. All three of these Heroes are strong and powerful units for Arena as well as other modes. In addition, Nanna has the rare inheritable skill Atk/Spd Menace. Sigurd has the rare inheritable skills Atk/Def Catch 4 and Fatal Smoke. Lilina has the rare inheritable skills Atk/Res Solo 4, Sabotage Res, and Pulse Smoke.

The blue units available this time are Ullr, Legendary Chrom, and Seiros. Ullr is a Light Mythic Hero that unlocks the use of the sixth slot on Raiding Parties for Aether Raids during Light season. She is a blue bow infantry with the ability to attack twice before her foe can counter, activating Deadeye on the second hit for high damage. Chrom is a Water Legendary Hero with the Pair-Up ability. He is a blue bow infantry with effective damage against armored units, as well as the unique Assist To Change Fate! which functions similarly to Reposition, but allows Chrom to act again after using it once per turn. Seiros is an Anima Mythic Hero that unlocks the use of the seventh slot on Aether Raids defense teams during Anima season. She is a blue infantry dragon with good Atk and defenses. Ullr has the rare inheritable skills Deadeye, Life and Death 4 and Time’s Pulse. Chrom has the rare inheritable skills Close Counter and Lull Atk/Def. Seiros has the rare inheritable skills Mirror Impact and Dragon Wall.

The green units available this time are Legendary Celica, Thrasir, and Rennac. Celica is a Fire Legendary Hero with the Pair-Up ability. She is a green tome infantry with a unique Tome, Saintly Seraphim, that deals bonus damage based on her foe’s Res. Thrasir is an Anima Mythic Hero that does not have the slot-boosting ability. She is a green tome infantry with effective damage against dragons. Rennac is a Normal Hero. He is a green dagger infantry with no unique skills, but has useful skills like Vicious Dagger+, Atk/Spd Solo 4, and Disarm Trap. Celica has the rare inheritable skills Swift Sparrow 3 and Atk/Spd Oath. Thrasir has the rare inheritable skills Flashing Blade 4 and Panic Smoke.

The colorless units available are Ash, Mila, and Wolf. Ash is a Light Mythic Hero that unlocks the use of the sixth slot on Raiding Parties in Aether Raids during Light season. She is a colorless beast infantry with high Atk and Def and the ability to gain and deny follow-ups based on how many of her allies are within 3 spaces. She also has the skill Opening Retainer, which allows allies within 2 spaces of her to teleport to any other space within 2 spaces of her, as well as the effects of Joint Drive Atk. Mila is a Light Mythic Hero that does not unlock the use of the sixth slot in Light season. She is a colorless infantry dragon with multiple useful support effects, including a minor boost to nearby allies’ stats in combat and the ability to inflict the Isolation status on foes in cardinal directions from her at the start of her turn, based on a Def check. Wolf is a Normal Hero. He is a colorless cavalry bow with the ability to follow-up attack before his foe can counterattack when initiating combat. Ash comes with the rare inheritable skills Atk/Def Unity and Lull Atk/Def. Mila comes with the rare inheritable skills Rally Def/Res+, Bracing Stance 3, and Sabotage Atk. Wolf comes with the rare inheritable skills Life and Death 4, Def/Res Snag, and Panic Smoke.

Each player will have different wants and needs, so it is impossible to make a recommendation that will suit everyone. However, we can broadly assess the value on each color, keeping in mind that statistically, players who summon on a color should expect to receive roughly the same number of each focus Hero on that color, though individual results may vary wildly from the average.

Red offers fantastic value to players who simply want strong units, and players who have a large amount of orbs saved up, such as several hundred or more, and wish to obtain Legendary Heroes of several different Elements to use for their Arena teams. Nanna, Sigurd, and Lilina are all strong units that will serve a player well in Arena. Conversely, this color offers no value at all to players looking for Mythic Heroes for Aether Raids. All three of these Heroes also have some rare inheritable skills which a player might covet, though this will depend on personal priorities.

Blue includes one offense Mythic, one Legendary Hero, and one defense Mythic. Players looking for merges on a Light Mythic and a Water Legendary are well served by this color. Defense mythic merges are generally much less valuable compared to offense mythics and legendary heroes, but can still provide some function. All three of these Heroes also have solid inheritable skills that a player might find use for even if they do not need one of Chrom, Ullr, or Seiros in particular.

Green is perhaps the weakest color this time around, with one older Legendary Hero who is still a solid choice, one older Mythic Hero that struggles to perform well against modern tanks, and one Normal Hero who doesn’t necessarily do anything unique but has some fantastic skills that players might want, in particular Disarm Trap which is incredibly useful in Aether Raids when used on the right unit. Green is likely not valuable to any players other than those who are specifically merging Celica, or really need an Anima mythic or perhaps Disarm Trap.

Colorless offers some solid value, and is incredible for those players who wish to improve their Aether Raids scoring in Light season. Ash is a fantastic Light Mythic that can find a place on many different teams, and Mila is still a solid choice on many teams with a huge impact on the meta, though she is a weaker choice in some matchups. The color sharing means that players can obtain roughly twice as many Light Mythic merges total when summoning on colorless compared to cases in which only one Mythic is present on a color. Wolf does not offer any direct scoring, but he is a useful Hero who can be highly threatening on the right team, and has some great skills to inherit if players have no use for him as a unit.

Overall, Red, Blue, and Colorless could all be very worthwhile for players with different priorities. Green is a generally weaker option unless a player is specifically summoning for one of the three units as a merge project.

Of course, one must also consider the opportunity cost, as with all things in FEH: orbs are a limited resource, limited either by time or by money, and should be spent wisely. The future is always uncertain, and you never know what amazing meta-changing Heroes might be right around the corner. But ultimately, if Nanna’s Legendary focus appeals to you, it’s a solid time to get some great units.