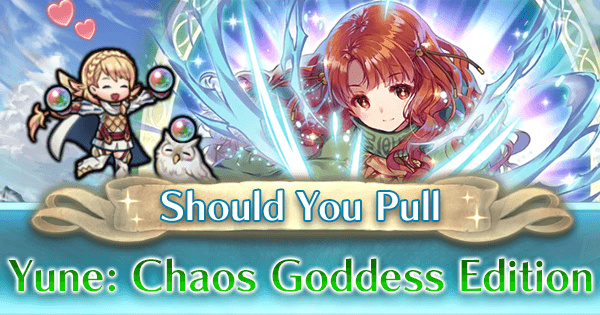 Yune’s Resistance is the second highest in the game after Winter Fae’s, and her prf adds an additional +3 to it, granting her a Resistance of 40. This not only makes Yune resistant to Ploys, but also gives her a massive defensive base with which to tank many magical threats- and proc her various skills off of.

What Else Is There?

Unfortunately with a Base Stat Total of 150, that doesn’t leave a lot of room for her other stats. Yune has cripplingly low Defense, making her extremely vulnerable to any kind of physical damage, as well as a low Speed of 27. While her Speed may allow her to double some Wary Fighter armors through her Chaos Manifest, there’s not much other use for it.

Compared with the three star Soren

Compared with the five star Deirdre

A Little Bird Told Me...

While her skills are very nice for buffing herself in combat, as well as helping her mage allies secure kills, Yune is lacking in other areas. She relies on her (admittedly high) Resistance to vastly improve her combat capability, but if she’s on Aether Raids Defense with a Fort difference (where she is supposed to excel, being a Dark mythic hero), it’s difficult to land her Sabotage in a meaningful way. Furthermore, with a lackluster Defense of 15, Yune will get taken out by most units with DC before she can make her follow-up attack, not to mention her vulnerability to bows.

That being said, Yune is an absolute monster of a unit in player hands. With the ability to force doubles with her Prf, as well as increasing her damage done by 13 at base, her damage potential is incredibly high.

Lewyn also occupies the green slot and is both a fantastic unit and one of the best fodder units in the game, coming with both Special Spiral and Odd Atk Wave.  Lewyn also wields the legendary Forseti tome, which allows him to attack twice (if his Speed allows for it) before his opponent can counterattack in a sort of inverse Desperation. More about Lewyn can be found on the Doorway to Destiny Should You Pull, located here.

Legendary Lucina is one of the better units on defense due to her unpredictable movement patterns with Future Vision, which can catch many teams off guard. She has incredible reach in any given map, though her lower Attack and blue range typing can result in her failing to kill her opponent quickly.

In addition to Legendary Lucina, Azura also graces this banner in her Legendary form, making blue a great color to pull if you simply want seasonal buffs. She should need no introduction at this point, as she is one of the most overpowered heroes in the game via her support utility. She can make infantry and flier units both move an additional space after dancing, as well as duplicating any single stat buff into all of their stats. More information on her can be found here.

Ophelia should also be a familiar face, as she is a notoriously strong unit on Aether Raids Defense due to her ability to pre-charge her Special with her prf tome. Her Attack is incredibly high for a mage as well, which results in many one shot strategies- though note that her defenses are both rather low, meaning that she’s likely to be oneshot in return. A more in-depth look at Ophelia can be found here.

The red legendary for this banner is Ryoma, who may be considered one of the more boring of the bunch. Nevertheless, Ryoma has incredibly high Speed and a significant Attack stat, making him a menace with a Firesweep Sword. His native Raijinto allows him to counterattack from range and his B skill, Bushido, grants him additional damage when his Special activates. All of this together makes him a lethal- if somewhat straightforward- unit.

Not only does Brave Celica have fabulous inheritance with Death Blow 4 and Attack Tactic, she also comes with a prf B skill, Double Lion, allowing her to essentially function as a brave unit. When coupled with her Royal Sword, which gives her additional Special cooldowns if she’s near an ally during her attack, she can be incredibly lethal.

Be careful, she’s coming to get you! Halloween Myrrh is one of the armored dragons with a base stat total of 180, meaning that if nothing else, she’s a great stat stick. Fortunately, she has even more than that going for her- with her prf breath, she can force follow-ups, and with her armor typing, she can learn skills like Special Fighter. More on Halloween Myrrh can be found here.

Eir is a fantastic unit who can both support and damage, with mapwide buffs and healing to all teammates per turn. She’s already proven her worth during Aether Raids, and her dagger’s ability to shut down enemy follow-up attacks makes her deceptively tanky on the offense. More on Eir can be found here.

The tried-and-true Brave Lyn returns again on a Legendary banner. As a cavalry unit who can negate Distant Counter, she proves herself to be exceptionally useful in many cases where attacking into a unit might mean certain death- however, her lower Attack and difficulty attacking into the ever-popular dragons means that she doesn’t quite shine as brightly as she used to.

As the first healer flier to be introduced, Halloween Mia is very strong for those who have a spare Wrathful Staff or Dazzling Staff to inherit to her. Her Witchy Wand has found even more use in modes like Aether Raids, where she can effectively negate Infantry Pulse teams and strong armor units by resetting all of their Special Cooldowns. In addition, she comes with Hone Fliers, a coveted flier buff. More on Halloween Mia can be found here.

“Wait, does this mean that people will be looking at me?”
Everyone, quick - appreciate Olivia by staring at her! Yet another character that I…
Another Chibi Playhouse: Book III Edition
https://www.youtube.com/embed/vA2iPMVn3Kg Another cute play 16 posts -…
Summer 2 silhouettes (July ‘22)
46 posts - 20 participants Read full topic
Silhouettes (July 2022)
(topic deleted by author) 1 post - 1 participant Read full…
About the choice of heroes for Resplendent Attires
I really have to wonder. How come there has not been a single Corrin (female) yet? I…
Read More