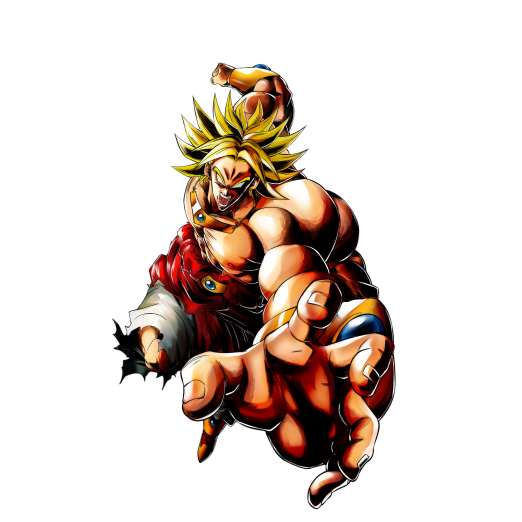 This is an old school Broly variant, hailing from the Broly: Second Coming Movie. This time, he comes with a couple interesting combat tricks.

It takes a lot to bring him down and his toolkit will make Enemies think twice before initiating an Attack. While he's a troublesome Fighter to play against, his Damage is middling outside of very specific circumstances, and his overall Team offerings aren't enough to secure him a Core spot on any Tag Team.

SP LSSJ Broly GRN is an extremely effective Tank through his Cover-like Unique Ability and Barrier Extra Move that can be drawn the first two times he is switched in. Even if he doesn't counter an enemy Strike Arts, which he is designed to do, he still reduces his Sustained Damage, significantly slowing down his foes.

Couple this with his already high Health and Defensive stats, and he essentially becomes a brick wall that hits back.

SP LSSJ Broly GRN has the ability to counter everything but Rising Rushes with his Extra Arts Card barrier, and chain a Special Arts Card to it, guaranteeing high Damage.

Slow on the Draw

While SP LSSJ Broly GRN is generally an incredible Tank, he's got some problems. For one, while his barrier does knock foes back even if it's not activated, that knockback can be dodged, and if it is, Broly is open for a Combo.

This unfortunate aspect of Broly's kit ultimately means that he has to be incredibly careful when he activates his barrier.

Despite his Special Move being a great nuke, this Fighter’s Offense is really underwhelming due to his below average Strike and Blast Attack stats, and also due to him not having any Offensive Unique Abilities.

His Main Ability is the silver lining, but it’s not enough to make him consistent overall.

This is the only truly viable Team option he has. He and SP SSJ Youth Gohan YEL are an absurd Combo, as Broly's Extra Arts Card Draws let Gohan go wild with his deadly Power Surge. Seeing as Broly is a horrible late-game Fighter, a Crisis Fighter like Gohan is a fantastic partner for him.

SP Super Janemba RED can defend him from Yellows, which is especially important in the mirror-match and the Regeneration match-up, and SP Full Power Boujack PUR's Support can augment his meager Damage output.

He’s a great Green option for this Team, but that would also mean dropping SP SSJ Bardock BLU or one of the two most popular and powerful Fighters in the game: SP Gogeta BLU and SP SSJ Broly PUR.

This is of course by no means a deal breaker and worst case scenario, SP LSSJ Broly GRN Buffs from the bench with his dual stat Z-Ability since two of the three main core Fighters are also Sagas Warriors.

While they don’t provide the same level of Synergy as Sagas Warriors, this is still a great choice and even shares some Fighters with the latter.

This is the best option for Broly, greatly increasing survivability.

18% to both Defenses and 20% to Strike Attack make this a must-have. Alternatively, Awakened What Futile Efforts No. １ can be used here, providing a Pure Strike Buff.

Why don't you try me on for size?

This Equip fits him perfectly due to the Strike Attack and Special Move Damage.

He's actually a bit underrated in the sense that most were disappointed with his Zenkai on release, but he's slowly but surely seeing a lot more play and an increase in viability. The Super Saiyan team led by SP SSJ Bardock BLU is ripe with Offensive powerhouses, so Z7 Broly GRN really doesn’t need to fill that role. He can tank just about anything, and even put out surprisingly high Damage with his Extra Move into Special Move combo.