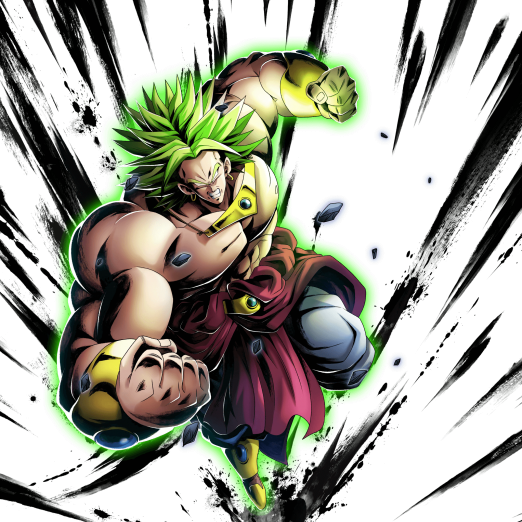 SP LSSJ Broly BLU, the Legendary Super Saiyan, was once the undisputed King of Dragon Ball Legends PvP. Now, well over a year since his introduction, the Zenkai Awakening System has allowed him to regain some of his former glory.

Zenkai 1 LSSJ Broly BLU is not a hegemonic Strike Damage titan, like he once was - his role in combat is now more akin to a strategic Offensive Pivot with a couple useful tools up his sleeve.

Despite his massive power increase, he's a consistently strong pick for Sagas Warriors Teams, as his Damage output lackluster compared to some of his competitors. His most notable impact on the Meta is his Zenkai Ability, which sees use by certain Teams that rely on Blue Fighters that hail from the cinema.

The most notable tool in Broly's arsenal is his ability to prevent his foes from switching twice for 5 Timer Counts when they Switch Fighters while he's on the battlefield.

While Zenkai 1 SP LSSJ Broly BLU's Offensive toolkit is often not threatening enough to force a switch, he can guarantee an enemy switch with his Extra Move, or Broly's Team can corner opponents, forcing them to switch lest they get caught by an attack.

If Broly is able to trigger his lock, he effectively puts the enemy at a disadvantage for a couple of pivotal timer counts, which can be game-winning.

Both Broly's Special Move and Ultimate Arts inflict Faint, giving Broly's Team the possibility of complete blowout games with a bit of luck. Faint is a notoriously deadly status ailment and its horrific momentum-swinging potential is ramped up to 11 with Broly and the rest of the Sagas Warriors roster taking advantage of it.

Broly can also inflict Faint with his Ultimate Arts Card, the Gigantic Meteor. This move doesn't just inflict faint though - it's a Massive Damage Ultimate Arts with a +25% Inflicted Damage Buff and a +30% Ultimate Damage Buff backing it up. It hardly ever Inflicts the status because more often than not, it's target is dead.

You Don't Scare Me

Unfortunately for the Legendary Super Saiyan, if his enemies do not switch out, he can't really get much going. His Debuffs are felt by his prey but they are not debilitating enough to incentivize a switch by themselves.

Broly can force enemy switching with his Extra Arts, but that too is situational, as he has no way of drawing it reliably.

His Z-Ability boosts Blast Defense and even at the highest level, a 23% increase to only one stat just isn’t that useful, especially in the current Meta where most of the powerful Fighters favor Strike Damage.

Broly's Zenkai Ability makes it better, but this is only available to Blue Sagas Warriors Allies; fairly niche in the grand scheme of things.

Despite being a Melee Fighter, he carries a Blast Arts Card. The most popular Sagas Warriors Teams overwhelmingly favor Strike Attack, as does Broly himself, so this card split only serves to weaken his Team's overall Damage.

This Tag is rather interesting as a place for Zenkai 1 Broly, but it isn't his best environment. Stronger Blues than him that are more synergistic with the overwhelming non-Sagas Warriors roster of this Tag like SP Angry Goku BLU all outdo him in single comparisons. That being said, he is a rather useful Blue Fighter if those options are unavailable.

This Tag is where Zenkai 1 SP LSSJ Broly BLU can shine, as both a bench Supporter for the ever-popular SP Vegeta BLU or as a core Fighter alongside the rest of its incredible roster.

SP SSJ Youth Gohan YEL doubles down on Broly's switch-locking potential with his own switch lock, and the two of them working in tandem can designate and destroy any Fighter they face.

As a Melee Fighter and pure glass-cannon, SP LSSJ Broly BLU should lay down as much Strike Damage as possible.

This Equip fits SP LSSJ Broly BLU nicely. Since he's so fragile, he'll be getting under 50% HP quite often anyway, and the Strike Attack Boost helps him do all he can.

This Equip is fantastic for any Sagas Warrior Fighter looking for extra Bulk and Pure Damage Buffs. The added Critical also gives some meager DPS.

Z7 Broly was a good addition to Sagas, but ultimately was replaced quickly by a much angrier variation of himself. Even still, he can still be used if LF Broly has not been acquired, or against Son Family alongside him to try and alleviate FSK Gohan