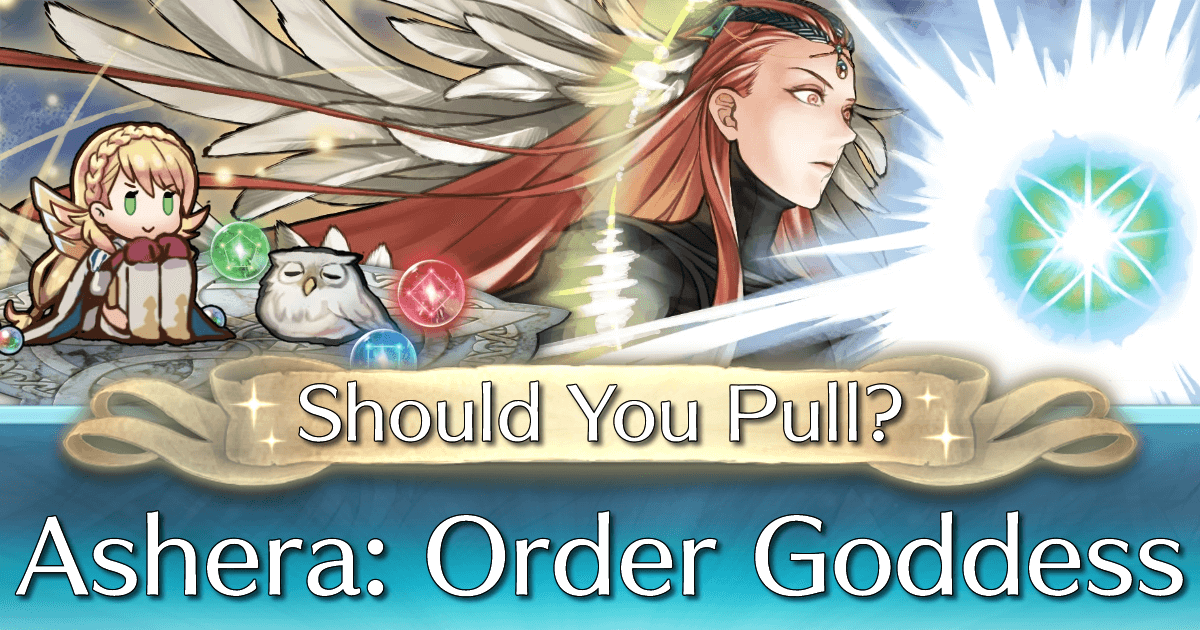 While Ashera may have been a surprise to some who were expecting Nótt, she definitely packs a punch and is worthy of at least a consideration on whether or not you should pull for her. As an Astra mythic, we’ll be comparing her to her main competition as well as looking at the quality of the mythic banner overall and trying to anticipate if there may be a better unit on the horizon to save your orbs for.

Ashera competes for a slot in an Astra mythic team with Naga, Altina, Plumeria, and Reginn. While she lacks Plumeria’s obvious benefit of being a mythic dancer and Reginn’s pro of having cavalry movement with a Canto skill, she’s still a definite improvement over Naga and Altina.

Ashera grants her allies potential immunity to Panic status effects, which plays a great role in utilizing Bladetomes or other buffing strategies, such as using Kaden, Claude, or Eirika. This also nullifies the Panic Manor, meaning that the once-popular Vantage strategies may resurface under her guidance.

Note that buffs are still negated by enemy Lull skills, so a bladetome can still be countered by an opponent with Lull Atk/Def, but on the whole it’s a very useful effect.

Ashera’s own utility as a combat unit is also fairly strong and her weapon isn’t countered by a Lull effect since it counts the buffs on her allies and not herself, making her a good companion to a buff-dependent carry. Unfortunately, she will not gain extra stats or HP due to being a mythic, and so will always be fairly fragile compared to her potential teammates, making her only situationally useful as a combatant.

Ashera is one of the best, if not the best mythic to run alongside a tanking team and allows you to freely buff your omnitank unit (such as Brave Hector) without being worried about getting hit by Panic. She works best with a slow moving team, where she can freely give her buffs to teammates while sniping towers and selectively engaging opponents before retreating back to the safety of her team. Her Res+5 only further buffs tanking strategies against the common magic-heavy AR Defenses, and she has the potential to resurrect Vantage and Bladetome (and Vantage Bladetome) strategies from the dead.

However, most of these are ultimately QoL increases. If a +6 buff will make or break your offense team, then it’s likely that your team will have difficulties against the toughest Aether Raids Defenses, even with her.

If you already use Plumeria then giving up a dancer slot to run Ashera is a hard sell - the alternative is giving up Reginn, who was free and has her own uses when it comes to team mobility and tower breaking. Ashera may be a better option than Reginn on some fronts, but is she so much better that it’s worth risking a mythic banner RNG for her?

Notice that we haven’t really mentioned Naga or Altina in this article - for obvious reasons. The OG Astra mythics are incredibly dated at this point, and if you’re still hauling the two of them around (hopefully alongside your free Reginn) or aren’t lucky enough to have Plumeria, then Ashera gains a lot of value… but really, it’s probably better to just wait for Plumeria’s rerun.

While Ashera is generally a QoL increase at best and a sidegrade to Reginn at worst, she happens to be slotted alongside some seriously powerful units.

Colorsharing with Ashera are none other than Legendary Claude and Legendary Corrin. Claude mostly speaks for himself if you’ve ever had the misfortune of encountering him in PvP modes - he is tanky, maneuverable, and very difficult to deal with thanks to his Fallen Star B slot. Legendary Corrin is somewhat less oppressive, but is still a handy lockpick for any tough situation. Colorless on this banner looks very good, and any of the three options could be a useful pickup.

Green is the second best option here with Dedue (Near Save and Sturdy Stance 3 fodder), Triandra (an oppressive Dark Mythic dancer for your Defense needs), and Freyja (a useful option, but ultimately an outclassed Light mythic).

Sadly, the other colors are a bit dated. Blue has an interesting factor in which 2 out of 3 of the blue heroes can pass on B Duel Flying 3 (outclassed by B Duel Flying 4, but can serve as a good inheritance base which allows you to also inherit Atk/Def Rein from Erinys). However, Peony was free, Ronan is a bit generic, and if you don’t have Legendary Azura by now, you likely won’t need her.

Red is not fantastic, with dated legendaries in Roy and Eliwood (though Legendary Eliwood’s Bonus Doubler buff may see some utility with Ashera compositions) and Azelle, who is again, rather generic and has R Duel Infantry 4 and… little else.

Tl;dr, colorless is the standout winner of this banner, with green looking good in terms of utility, while both red and blue suffer from dated legendaries and unimpressive new units.

While we cannot predict the future, Nótt’s lack of appearance on this banner almost certainly places her on the midpoint banner, which will premiere on June 6th. This banner will be sparkable with a powerful Dark mythic that will likely change up the Dark Defense meta for the foreseeable future. If you care at all about your Aether Raids Defense, it’s recommended to save at least 160 orbs for this banner to ensure your spark.

But let’s not get ahead of ourselves.

In June, the colorless duo, Legendary Alm and Legendary Leif return to colorshare with Bramimond, a Dark Defense staple. While these two have lost some of their effectiveness in the recent meta, they’re still formidable enough to be an attractive summon. Additionally, June brings back Plumeria, who is arguably a more useful Astra mythic than Ashera herself, so it may ultimately be better to wait until June or July’s legendary banner to dump your orbs.