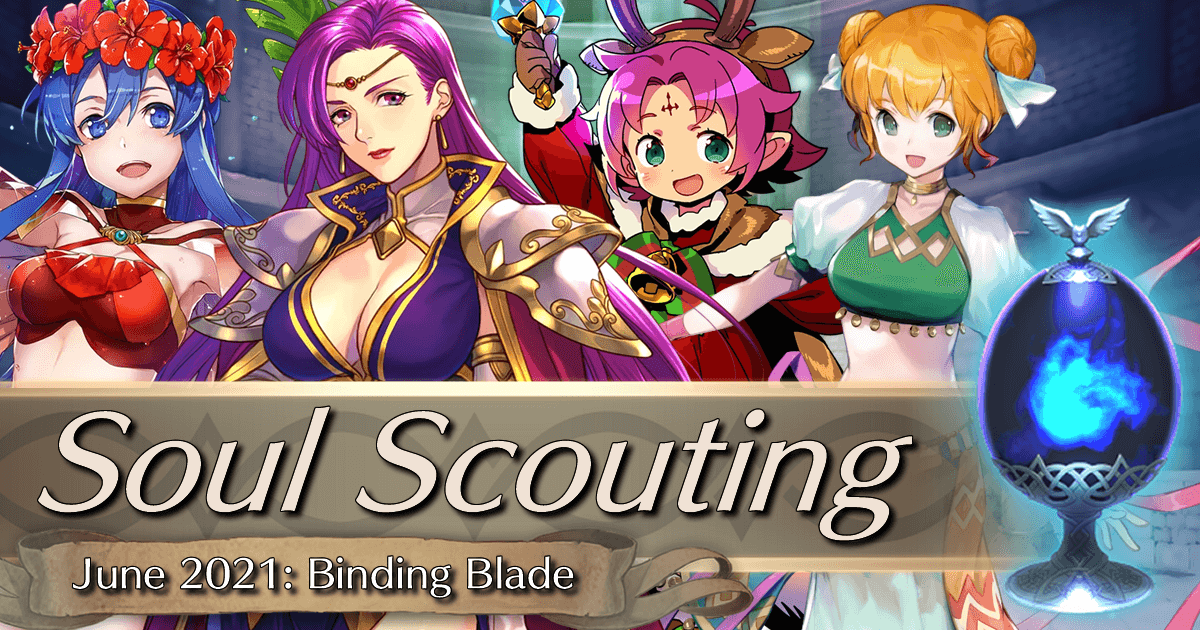 For this iteration of Hall of Forms, we have a decent spread of units from Binding Blade; one is a dagger dancer, one is a dagger cavalry unit, one is an armor. Finally, one is a highly meta Grand Hero Battle unit, allowing potential choosers to avoid high Heroic Grail costs while grabbing high-quality skills. Players have the chance to build up and possibly add the following units to their roster permanently by spending a Forma Soul: 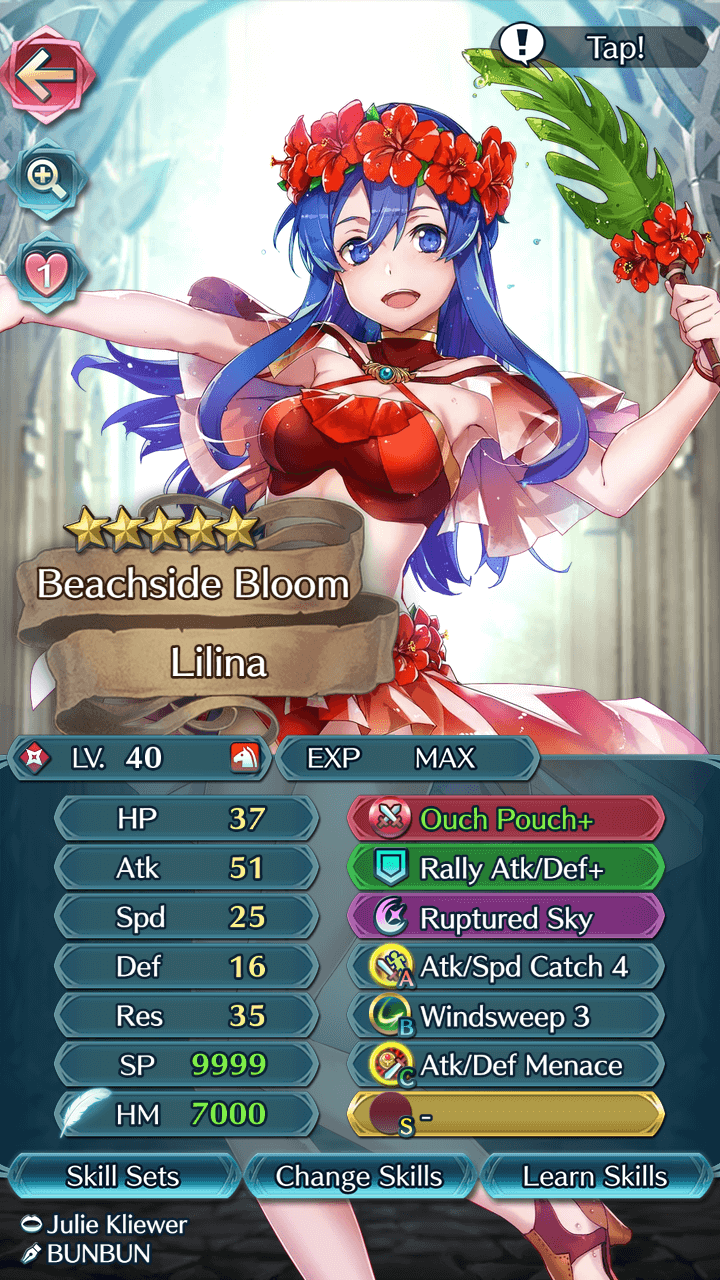 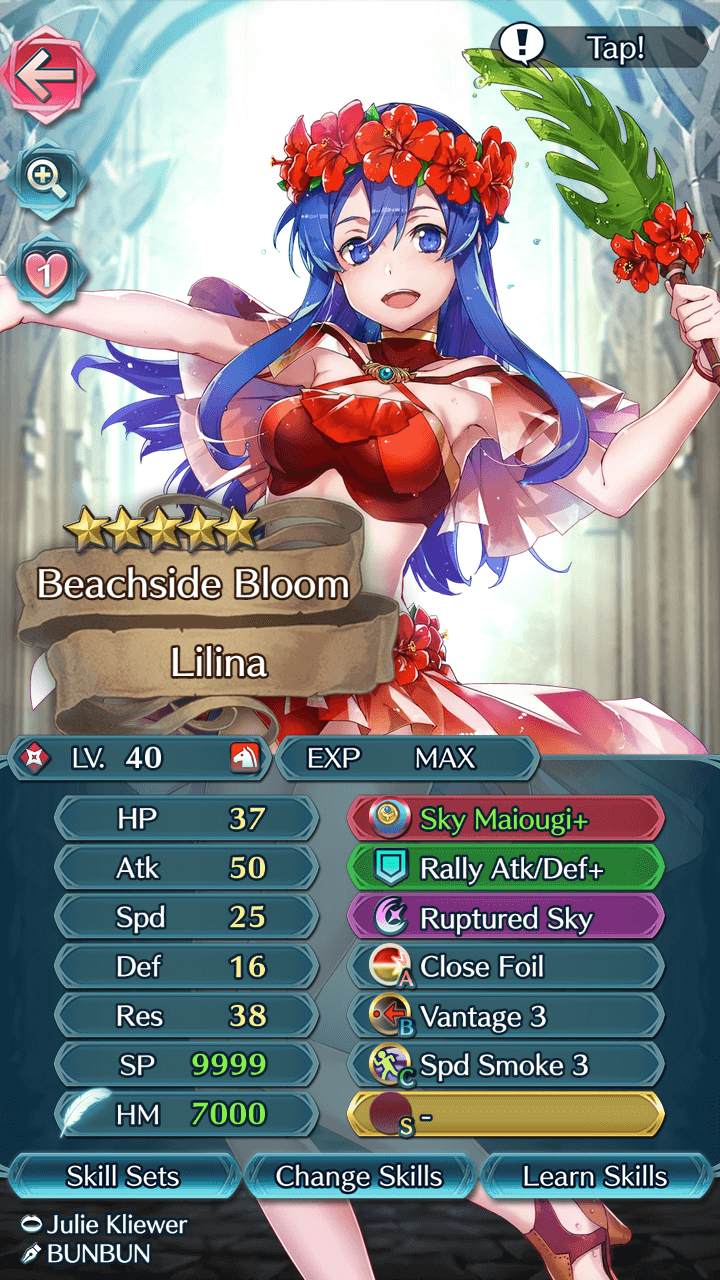 While at one point Lilina was considered a top tier inheritance target due to her possessing the meta Broadleaf Fan, little attention has historically been paid to the unit herself. Sporting an above average Attack and Res stat for a dagger unit, along with a subpar Speed stat and pitiful Defense stat, Summer Lilina is in a tough spot.

Since her native dagger is really the best thing about her, it's likely that you won't want to stray too far from its power. It's just as well really, since daggers lack any really powerful inheritable weapons. Still, there are some fun ways that you can build her, while keeping in mind that you'll be mostly utilizing her for her Broadleaf Fan after purchasing her.

To synergize Lilina's kit with her Broadleaf Fan, the only 'expensive' skill needed is Close Counter or Close Foil. Vantage is extremely common, as is Spd Smoke and Atk Smoke. Therefore, it is likely beneficial to build Lilina for other purposes where you can get the most bang for your Forma buck.

Lilina's default A slot is Atk/Res Solo, therefore it may be redundant to get another Atk/Res boosting A slot. Then again, you can always upgrade her native 3 to 4 - but Close Counter or Atk/Spd Catch are both likely better options: the first due to its meta utility, and the second due to the fact that it's a +9 point Atk skill, particularly when paired with a C slot like Atk/Res Menace or Atk/Def Menace, which allows her to fulfill the debuff condition simply by existing near a foe. While Lilina cannot use the Speed aspect of Atk/Spd Catch particularly well, she can still pair it with Windsweep in order to sweep slower armored units, such as everyone's favorite Fallen Edelgard. Lull Atk/Def is another option for her B slot which can also directly add to her damage potential.

Tragically, A/D Far Trace is not in the skill pool yet, so Summer Lilina loses out on one of her best options. 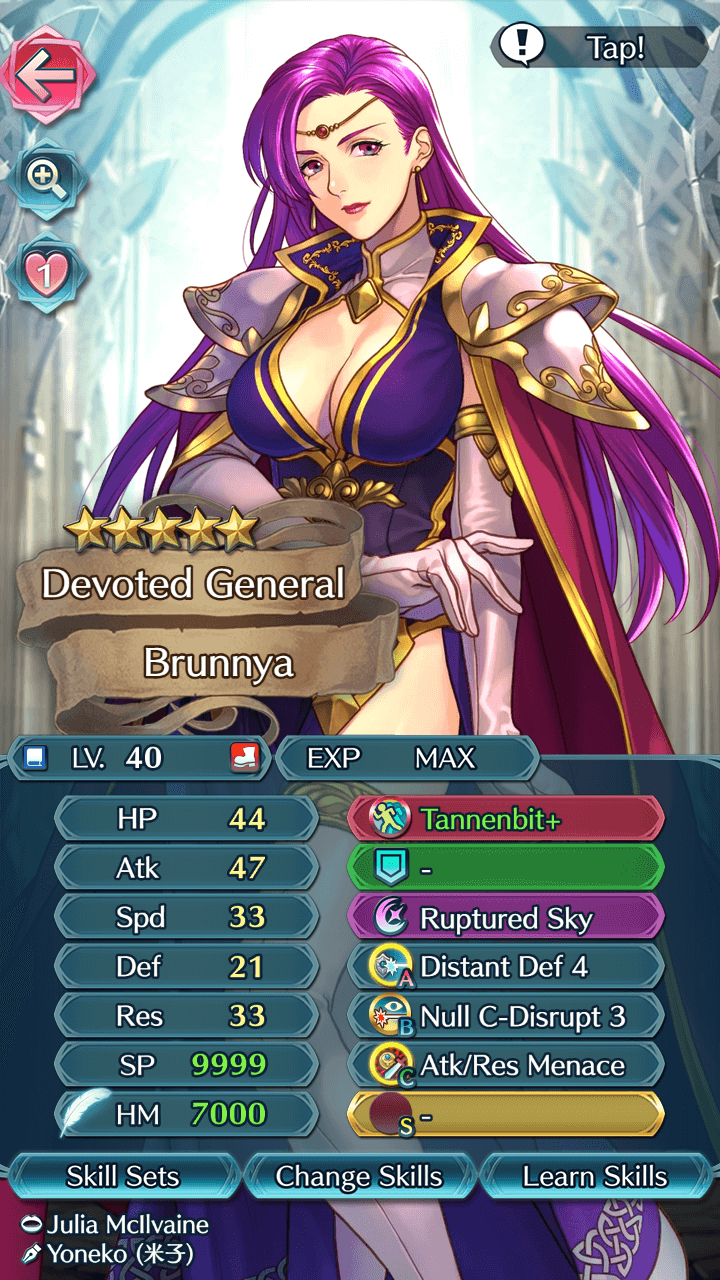 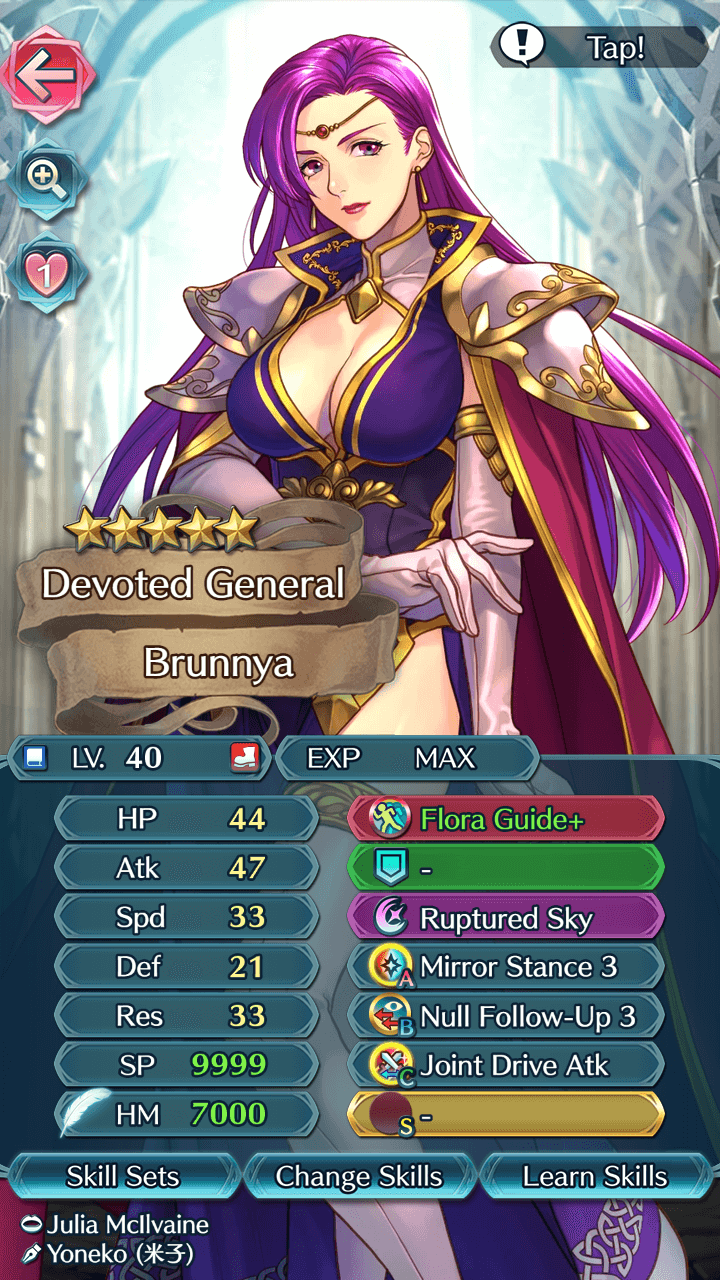 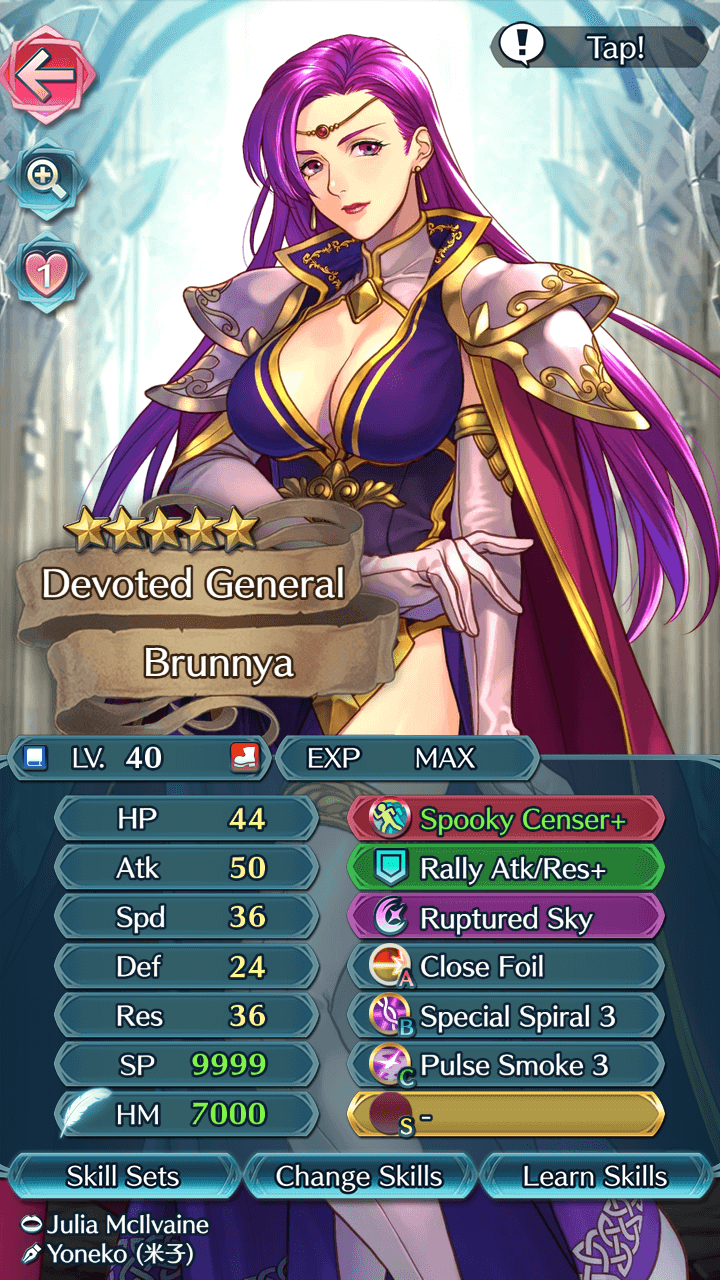 Close Foil and Special Spiral still have their uses...

Brunnya has always been a popular pick for a meta frontline in Aether Raids Offense. With a strong prf weapon and a well rounded statline, she's definitely a good option for a Forma Soul. Most players would still use her with her native Fimbulvetr, and the arguably best tome inheritable, Pact Blooms+, is on a free unit - therefore, any fun weapon you get on her is mostly just for flavor. As for the rest of her kit, Brunnya's excellent prf tome makes her a highly flexible unit who can run any number of meta skills, depending on how the rest of her team looks.

Due to the rise of Save skills, a very popular strategy in Aether Raids Offense is to pair an armored unit who has Near Save in their C slot with a mage who has Null C Disrupt in their B slot. This alleviates the need to run a skill like Close Counter in the mage's A-slot, which gives them the opportunity to bolster their stats further. It also allows the mages to retaliate vs staff units with Dazzling Staff, without endangering their Near Save ally. Pairing this strategy with Distant Def 4 in the A slot is a no-brainer, particularly for Brunnya who can nullify debuffs on herself with her prf, which forces her ranged opponent into a combat where they are not allowed buffs and Brunnya is not allowed debuffs.

However, there are still excellent other options for Brunnya, since she is such a flexible unit. Close Foil is always appreciated for the extra stats, though it renders Brunnya unable to retaliate against significant threats such as Seiros. Mirror Stance or Bracing Stance are also excellent options for tanking, as long as you can keep your foes at range. Any Solo skill is also fine, such as Atk/Spd Solo. Honestly, Brunnya is so flexible that it's more difficult to find an A slot that isn't somehow synergistic with her role.

For her B slot, Null C-Disrupt has already been mentioned, but Null Follow-Up is also an excellent option, particularly when it comes to countering foes such as Duo Lif. Special Spiral or a Lull skill also works for certain builds.

Finally, Brunnya's C slot is almost tailor made for Atk/Res Menace, since she uses both stats, wants to debuff both stats on her foe, and negates debuffs on herself and doesn't have to worry about being hit by Panic. Other options include Pulse Smoke and Joint Drive Atk, both of which are still good on her. 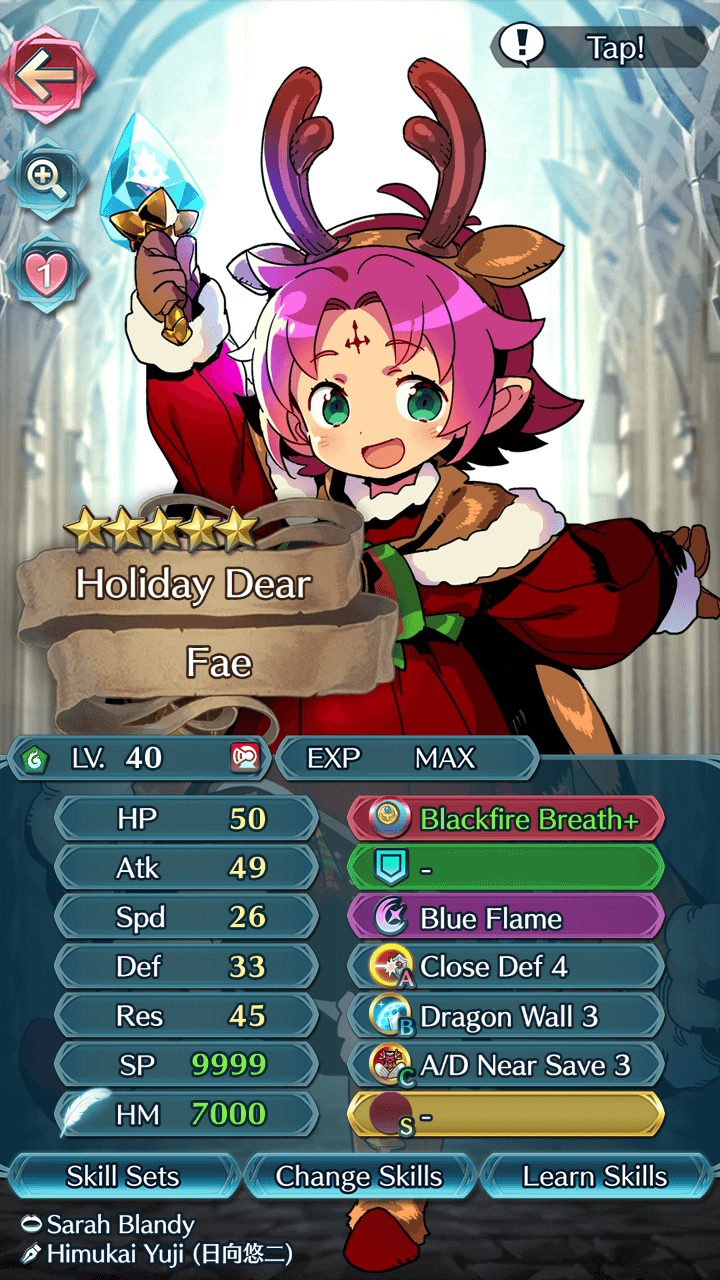 A companion to that Brunnya build 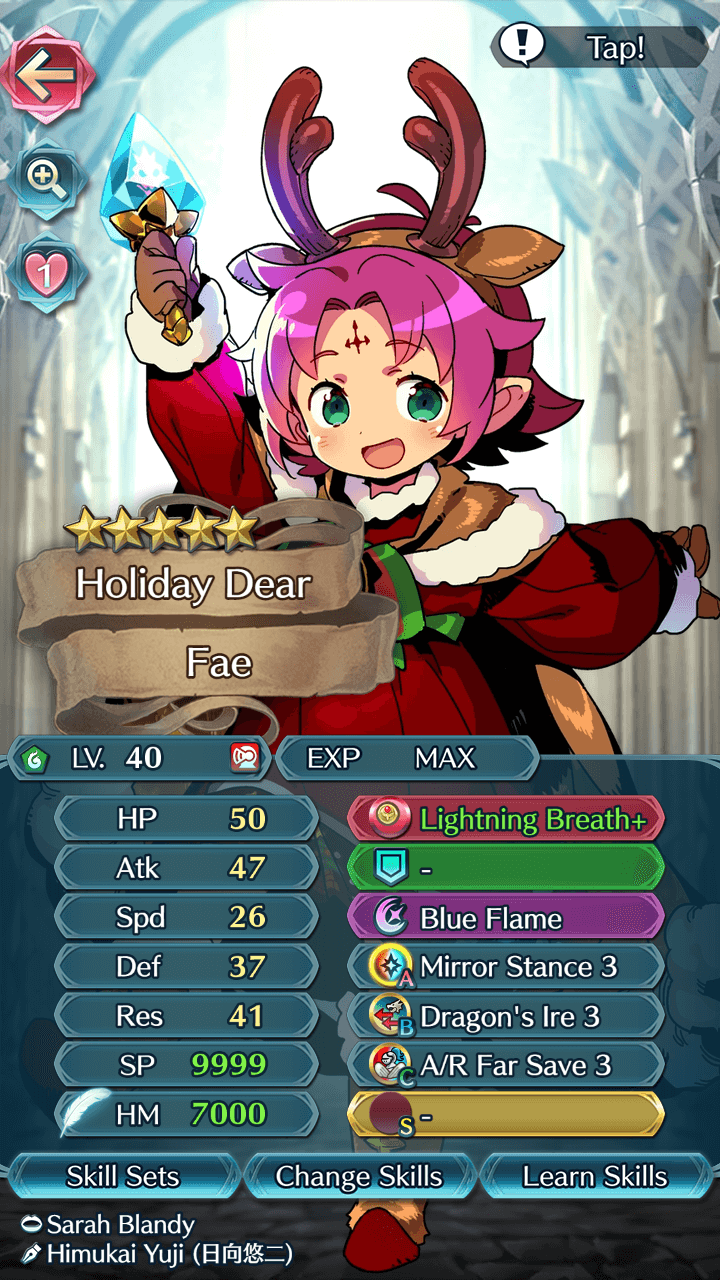 Winter Fae is a green armored dragon, and that alone makes it difficult for her to ever rise to a full meta slot due to all of the effective anti-dragon and anti-armor weapons out there - not to mention the fact that many meta threats such as Legendary Sigurd or Duo Lif, are red. Still, she is the first potential Forma unit to have access to the insanely meta Save skills, and that alone makes her an ideal choice for a Forma. Winter Fae also has access to defensive Dragon-only B slots, making her a good option for seeking out difficult-to-access skills.

Dragons do not have many inheritables that are inaccessible - Winter Fae will likely want to make the swap to Water Breath, found on the free M Kana, or Pale Breath, found on the free Ena. The only seasonal-locked inheritable breath is Blackfire Breath, which is a target for flavor, but has negative synergy with Save skills so is difficult to fully recommend. At best, her weapon choice will save you 20k feathers.

C-Passive: A/D Near Save, A/R Far Save

The best reason to use a Forma Soul on Winter Fae is to get a combination of the rare Save skills with the rare Dragon skills.

A/D Near Save can be used with Close Def or Bracing Stance in conjunction with a ranged magic tank who has Null C-Disrupt, while A/R Far Save is best when used with Lightning Breath+ and an A slot which boosts Attack, since Lightning Breath will leave Fae with a lower than normal Attack stat.

No matter which option you go for, you'll also want to pick up Dragon's Ire, which acts as an upgraded Quick Riposte, or Dragon Wall, which offers Winter Fae Res-based damage reduction. If picking up Dragon Wall, you'll want Quick Riposte in her seal slot - if using Dragon's Ire, you can continue stacking stats with seals such as Bracing Stance instead. 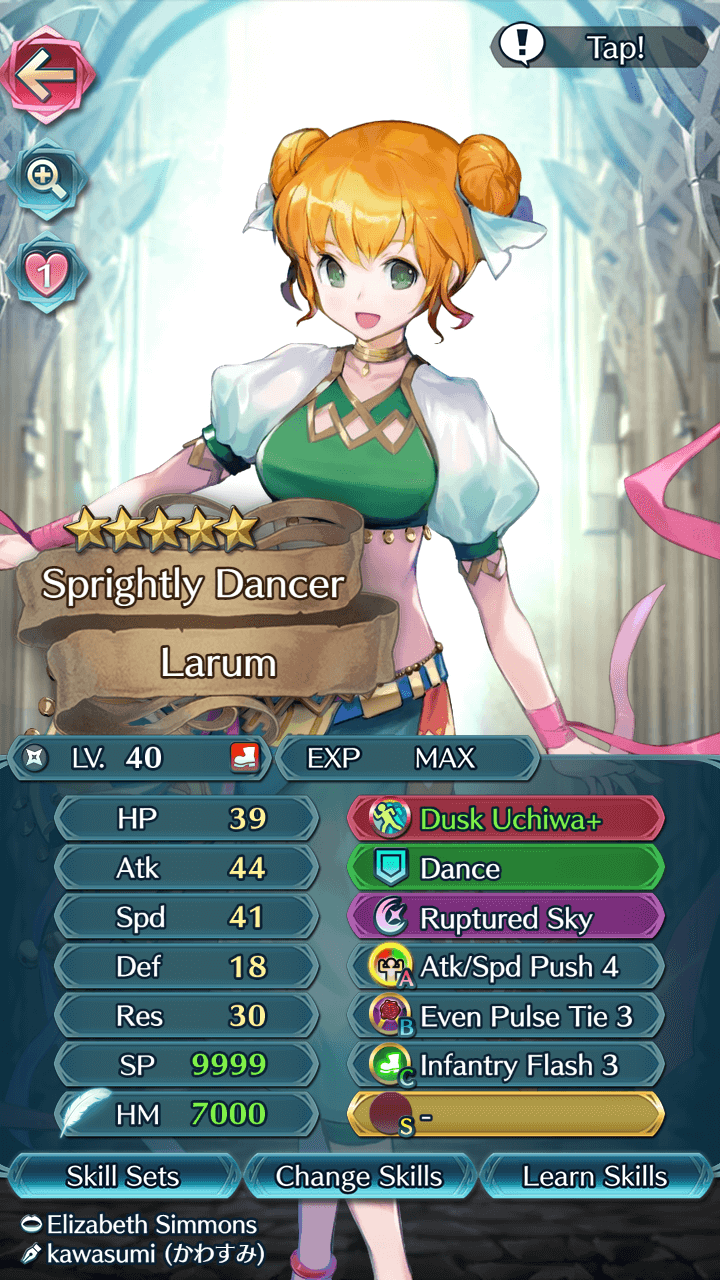 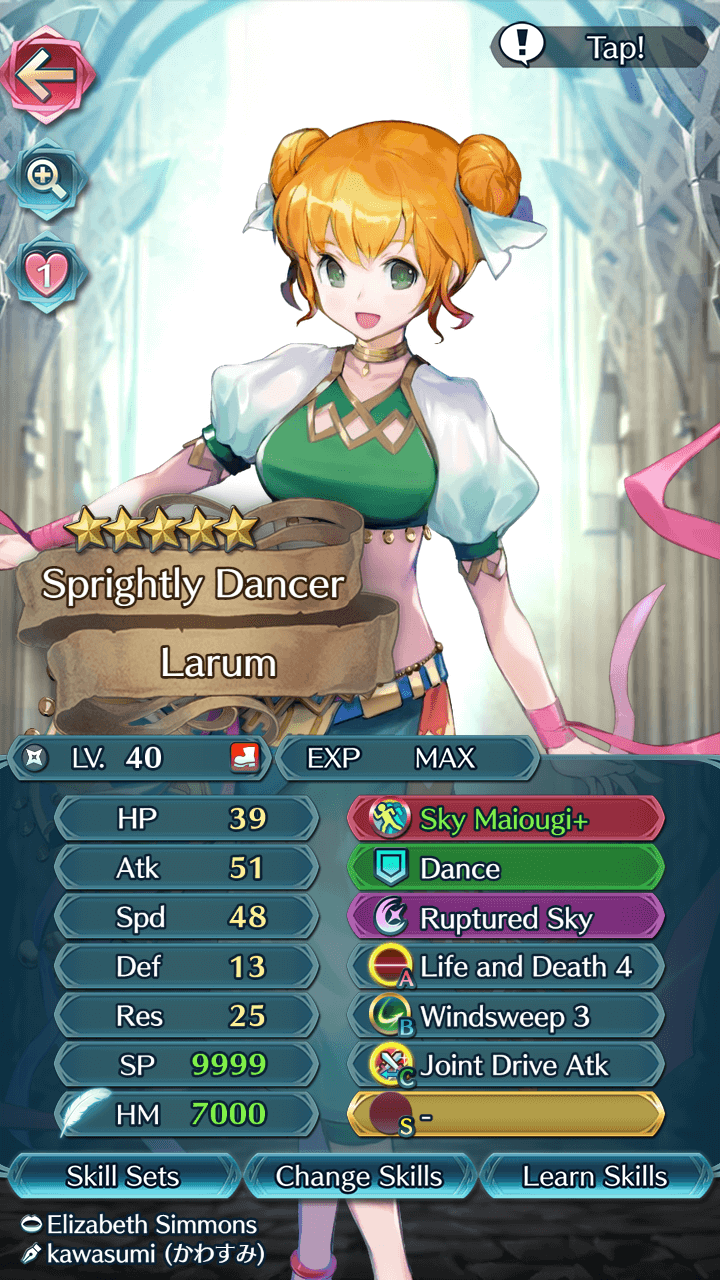 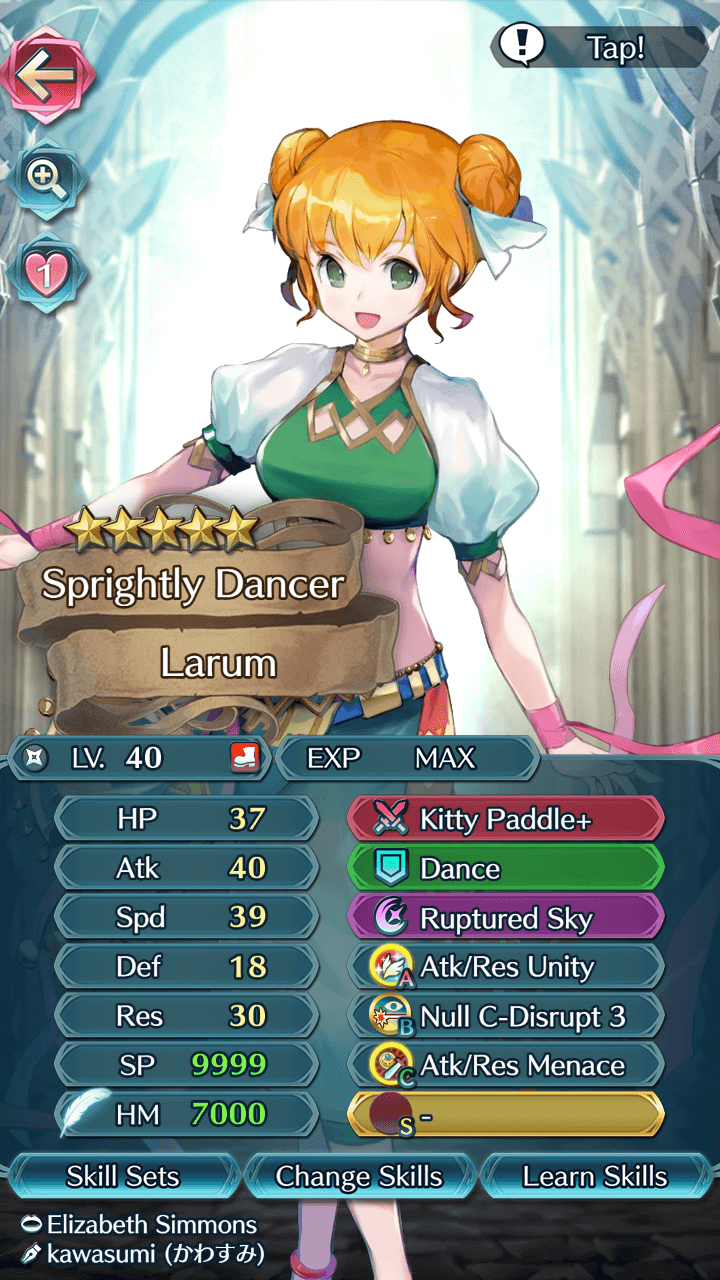 Make your dancer a magic tank. What's the worst that could happen?

Larum is a dancer with a great base kit, so her possible inherits are flexible. The nice thing about dagger units is that you can build them to counter just about any unit type in the game - and the nice thing about Larum is that she can do that while offering dance and other high value skills.

Her base kit includes Dragonslasher+, so there's no need to choose a dragon-effective prf. She also comes with the valuable Disarm Trap, leaving her B slot more flexible.

Larum's stats are surprisingly decent for a dancer, with high Spd, high Res, and mediocre - but not unsalvageable - Atk. She can utilize these stats to face off vs dragons or mages with inherits like Kitty Paddle+ or her native Dragonslasher+. If choosing to use her as a magic tank, it's worth building her A passive with skills like Atk/Res Unity or Fury 4, while the Null C-Disrupt B slot is a no-brainer so she can counterattack against strong staff units. Meanwhile, Windsweep and Life and Death pair well together to allow her to get free effective damage and inflict dagger debuffs on her foe.

Even Pulse Tie is better than Odd Pulse Tie in terms of Aether Raids Offense, since your foes Turn-1 special charges activate at the end of your turn, meaning that EPT will activate turn two, while OPT will not activate until turn 3. Nevertheless, Larum is a mediocre choice for a Pulse Tie due to her low HP value, which would likely need to be buffed if selecting this anti-Infantry Pulse option. It's rare, so it's worth mentioning.

For her C passive, Joint Drive Atk is the best option for a hybrid dancer/ranged counter, while Infantry skills naturally only work if using her with infantry allies.

Gen 1 Staff Refine Ideas (because IS won't do it)
Share your thoughts and ideas. Some were just off the top of my head, so they’re…
Orb Flexing time 💪
Too lazy to do the paralogues and story missions, but I figure this is good enough…
Why DR was a mistake
B!Alm, +3 +Atk, dark blessed for 66 Atk. Prf grants +10 for 76, so scendscale will…
Ninja Banner - Hopes and Predictions
Title Basically Says It All List your hopes and predictions for the Ninja Banner …
Do Forma Units Get Re-Run?
Alright, so I’m pretty sure I’m gonna use my forma soul on fallen Ike this month…
Read More