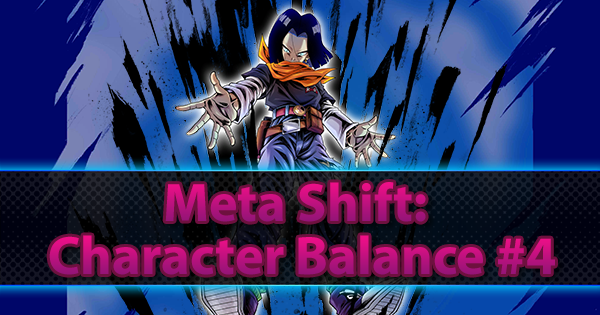 As per usual, the Character Balance Changes #4 buffed five SP Fighters and five EX ones. These Buffs are quite relevant, since they made some outdated Fighters reliable again, so the state in the Meta of some Teams changed.

Effect on the Meta

Plenty of Teams got more options, however, Android and Frieza Force are the ones who stand out, since they were in a bad state before Character Balance Changes #4

SP Android #17 PUR’s upgrade improved his Defense, making him very hard to defeat, and also made his Blast Damage competitive. Thanks to this, SP Android #17 PUR is now a noteworthy Fighter, especially since there are few direct counters to Android. However, Android’s Offense is still inconsistent, with SP Perfect Cell YEL being the highest damaging and highest priority Fighter on the Team.

This Team focuses on countering Saiyans. SP Golden Frieza GRN and the newly upgraded SP 1F Frieza BLU make a hellish one-two punch in that regard. However, this Team’s Damage output depends heavily on its Anti-Saiyan Unique Abilities, which means it fares poorly against non Saiyan Teams -- despite SP Vegeta PUR and EX 3rd Form Frieza PUR being solid alternatives against other Teams overall.

SP SSJ Vegeta RED got Buffed considerably, however, he’s not good enough to be a part of this Team’s Core. Mainly, SP Super Vegito PUR and SP Gogeta BLU are too strong Offensively to be replaced by him.

Secondly, he only Buffs himself with his Z-Ability, which means that he’s not a good Bench option--so he can’t even be put there to be used when needed. SP SSJ Goku YEL also got Buffed, but he’s still an uncompetitive Fighter due to his suicidal Unique Abilities that don’t even make him strong Offensively.

SP SSJ Vegeta RED faces strong competition here too. He’s not good enough to be considered a Core Fighter, however, he can be put in some niche Teams that Synergize well with him. For example, he can be paired with SP SSJ Cabba GRN and another Vegeta variant.

Character Balance Changes #4 fulfilled the purpose of making weak Teams stronger, since Android and Frieza Force were arguably the worst Teams in the game before this update, while now they are Meta viable. These changes will make PvP more diverse, and thus more enjoyable.