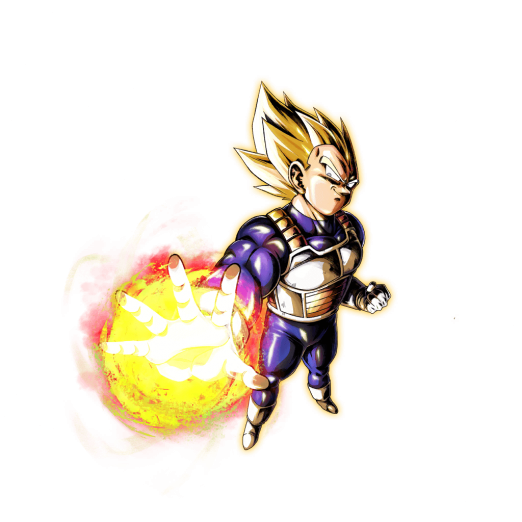 Character Balance Changes #4 made SP SSJ Vegeta RED viable again, as his Damage output is potentially very high at the beginning of a Match, and his survivability is great thanks to his High Defense and his Healing Extra Move.

However, his limited synergy restricts him to some niche Teams, so he’s not that relevant at the moment. It’s worth noting that once Vegeta Family becomes a viable Tag, this Fighter may be a great option for it. At the very least, he's a fantastic Bench option for that Tag, though it still struggles Defensively.

This Fighter’s Strike Damage output is very high right off the bat thanks to his Assault Unique Ability, which opens the way for early game barrages if combined with his Main Ability that reduces his Strike Card Cost by a massive 15 and increases his Arts Card Draw Speed level by 1.

SP SSJ Vegeta RED can withstand many hits thanks to his great Defensive Stats and his Extra Move that heals him by 15%. However it should be noted that his Health is quite low, so that 15% is less effective than it seems in normal situation.

However, overall his durability remains great for an Offensive Fighter such as him. Vegeta boasts one of the highest Blast Defense Stats in the game, which makes him a very bulky Fighter in those match-ups.

While SP SSJ Vegeta RED is an incredible Offensive force for the first 45 timer counts of a Match, the same can’t be said for the following period of time of a Match.

In fact, while his other Unique Ability  still Boosts Strike Damage, it’s more situational than his Assault one, as it's dependent on the cards he draws.

This variant of the Prince of all Saiyans does not possess any Blast-Buffing abilities, which limits his Team applications. If he's placed onto a Team with Blast-oriented Fighters with held Blast Arts, his overall Damage will plummet.

The Vegeta Family Tag might not be incredibly competitive, but SP SSJ Vegeta RED contributes to its success with his excellent Z-Ability.

On Core, he is passed up by SP SSJ4 Vegeta RED, who directly competes with him and surpasses him in every meaningful way, but this Vegeta variant can be brought instead of him if a player lacks the Super Saiyan 4.

While SP Super Saiyan Vegeta RED is a bit past his prime, he can still be a respectable Strike Defense Tank Fighter. He currently boasts the second highest Strike Defense stat in the game and this Equip helps him further improve that Strike Defense.

Also, this Fighter's Main Ability makes him geared slightly more towards Strike Attack, so the Strike Damage is necessary here.

This is a well rounded option for SP SSJ Vegeta RED if he’s paired with other Saiyans.

SP SSJ Vegeta RED is as pure of a Melee Fighter as it gets. He reduces his Strike Arts Card cost and has multiple Unique Abilities that give him tons of Strike Damage. He’s also the first Fighter in the game to Boost Vegeta Family with his Z-Ability.

That being said, he’s very one dimensional in his Attack, has quite low Health, and SP SSJ4 Vegeta RED just kicked him out of the core of the only Team he works in.