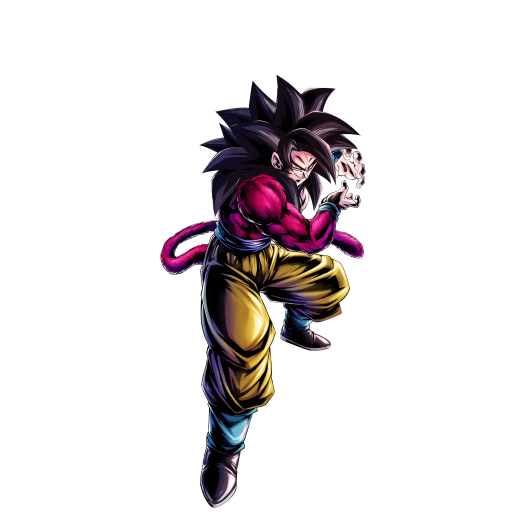 Goku has received a Zenkai Awakening and he’s super strong this time around (again). He’s the third GT Fighter to receive a Zenkai Awakening which most likely means that GT will be a focal point for the anniversary as they have been receiving a huge amount of buffs.

SP Super Saiyan 4 Goku PUR’s Zenkai has improved on his strengths greatly. His tanking ability has gotten better with the huge increase to his stats. His offense has also gotten better for the same reason but now it takes less time for him to be fully ramped up,

He also has some support capabilities specifically for the GT team which is great but can hinder his usage on other teams.

SP Super Saiyan 4 Goku PUR’s Melee combat abilities are excellent, but what truly sets him apart is his bulk. Goku restores his Health by 10% and reduces all Damage Taken by 35% for 15 Timer Counts whenever he enters combat, letting him moonlight as a Cover-change Tank.

His high Defensive Stats compliment this utility beautifully. He’s one of the toughest Fighters to take down.

He can switch in during an Ally's combo and use the move to finish off the foe before they have time to flee, or use it to punctuate his own combos to ensure maximum unmitigated Damage.

Unfortunately, this Special Arts freezes Goku in place as well - this Arts Card has longer recovery than other Special Move Arts, so it must be used with caution.

You’d never expect a powerhouse like SP SSJ4 Goku PUR to have support capabilities but now he does due to his Zenkai Awakening.

He gives a huge 30% Damage Inflicted increase when he swaps out along with a 30% Ki Recovery increase. This support is especially powerful alongside SP Super 17 GRN as this will help his early game Damage.

His support is great but sadly it’s only for GT Fighters which will hinder his usage on other teams as mentioned in the Overview.

SP SSJ4 Goku PUR now has one of the most powerful unique abilities in the game, nullifying cover changes. This ability is oppressive as it’s a 100% guarantee for you to get an interrupted combo on your opponent. A lot of Fighters nowadays have Strike and Blat Cover changes alongside Cover Rescue’s but SP SSJ4 Goku PUR does not care for any of that and he will pummel you with his immense power.

You Can't Come Back

SP SSJ4 Goku PUR’s main ability now grants him the ability to nullify endurance for a whopping 30 timer counts! This ability is better than Fighters who only gain this effect with their Ultimate Arts as SSJ4 Goku can use tap attacks, strike and blast arts to get rid of the endurance.

A Chance, but not Much of One

As a Crisis Fighter, SP SSJ4 Goku can compete for a time, but when his Sustained Damage Cut and Damage Inflicted Buffs run out, all he has to rely on to win the day are his permanent Inflicted Damage Buffs and his Strike Arts Discount.

Neither of these  are comparable to the rest of the game's roster of Crisis Fighters, who perform the role infinitely better.

Even though they shortened the amount of time it takes for SP SSJ4 Goku PUR to ramp up, he’ll still have to wait for 30 timer counts before he can deal significant Damage to opposing Fighters.

SP SSJ4 Goku PUR has a single buff Z-Ability for Son Family and GT which is incredibly bad in a meta where almost all of the top-meta Fighters have double Z Abilities for their respective tags.

The third candidate to consider for this team is SP Super 17 GRN as his ability to garner Extra Arts can be utilized by SP SSJ4 Goku PUR which will give him Card Draw Speed.

However, with this setup, the team becomes mixed with Strike and Blast Arts and SP SSJ4 Goku PUR doesn’t favor Blast Arts as they won’t do much Damage.

The Simian Saiyan doesn't fit the Son Family Team well as the team is a Blast-oriented team. Even so, you might find him to be more useful than SP SSJ3 Goku PUR.

SP SSJ4 Goku PUR doesn’t look to be a great fit on the Saiyan team. He loses an entire unique ability if he’s on the team nor does he buff the team with his Z-Ability(even though some Fighters will get his Z-Ability due to them being Son Family). While SP SSJ3 Goku PUR is the better choice, SP SSJ4 Goku PUR can be used as a defensive wall on this team.

It's All You, Gohan!

Please note, when not on the Son Family Team, You're Facing Me Now takes this Equip's place.

A very large Pure Strike Buff makes this Equip a no-brainer for this Melee Fighter.

An excellent choice for Goku, significantly boosting his survivability.

SP SSJ4 Goku PUR continues the theme of Zenkais who weren’t changed too drastically, but didn’t need too much anyway. His ability to nullify Cover Change when he hops onto the battlefield is an exceptional addition considering how prevalent they are in the Meta. GT now has a complete color wheel and he's a huge part of their success.