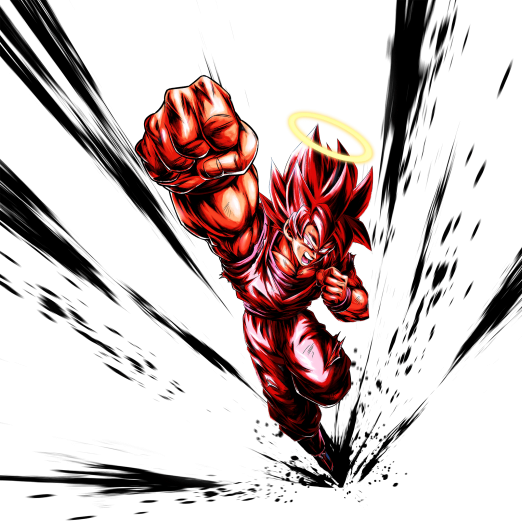 This exciting, ephemeral form captured hearts and minds by showing fans a combination of the two most iconic transformations in Dragon Ball, and Legends does an excellent job representing it with this Goku variant. SP Super Kaioken Goku GRN is a no-holds-barred Blast brawler, a role Bandai seems content to saddle most Green Saiyan fighters with.

Despite the pool of Ranged Green Fighters being expansive, Goku differentiates himself with a couple of notable tricks. For starters, he has some of the most impressive combo capacity of any Fighter in the game in specific situations, and he can reach those heights with no Support.

He has a bevy of activated effects that make him a menacing Offensive and solid Defensive pivot once his Health drops below 50%, harkening back to the latter half of Goku's desperate battle against Pikkon.

All in all, SP Super Kaioken Goku GRN is quite strong, though his strength is comperable to his Green Saiyan contemporaries, most notably SP FP SSJ4 Goku GRN, who surpasses this Goku in a number of important areas while fulfilling the same role.

Even though he might not be the undisputed best Ranged Type Saiyan, his flurry of Blast Attacks will dominate any enemy that takes him lightly.

SP Super Kaioken Goku GRN's Offensive prowess at the very start of the Fight is essentially unmatched. The scarlet Saiyan enters the field with +40% Damage Inflicted, +40% Blast Damage Inflicted, +70 Ki Recovery, -5 to all Arts Cost for 15 Timer Counts, and most importantly, a +1 Card Draw Speed Buff for 20 Timer Counts from the start of the battle.

With this combination of effects active at once, Goku is able to string together mercilessly long Combos, which obviously carry with them a number of key benefits. Goku accelerates his Team's Rising Rush progression, and can buy quite a bit of time for his convalescing allies who might have high Substitution Counts.

If Goku manages to get a hit during those first 20 Timer Counts after a being Buffed by a Support Fighter like Zenkai 7 SP Youth Goku YEL, he'll be able to easily attack long enough to allow that Support Fighter to enter the field once again.

This is not always reliable, as Goku might kill his target before sufficient time has passed. Most players certainly won't find that to be an issue.

Goku isn't entirely offensive, he has some Defensive utility as well. Any time one of Goku's attacks is evaded, he grants himself a 40% Sustained Damage Cut Buff for 10 Timer Counts. This provides some protection against perfectly timed vanishing steps, an occupational hazard of Ranged Fighters like himself.

As part of Goku's care package he receives once his health falls below 50%, his Extra Arts Card gains additional effects. It grants him a one-time Endurance activation and a 30% Sustained Damage Cut that stays active until Goku survives another hit.

These effects active in tandem with the 40% Sustained Damage Cut he gains after he dodges makes him a situationally powerful Defensive Fighter.

With that aforementioned Endurance active, Goku becomes an excellent back pocket Defensive pivot for late-game incoming Ultimate Arts Cards, Special Arts Cards, and most importantly, Rising Rushes. Because of the Extra Arts Card Draw that activates when Goku falls below 50% Health, this effect is hardly difficult to ensure the actuation of.

Super Kaioken Goku knows how to make a climatic showdown dramatic, as evidenced by his toolkit's general improvement once he falls below 50% Health.

When it comes to finishing strong, Goku delivers with an incredibly strong Main Ability and Ultimate Arts Card combo. As is tradition at this point for Fighters who draw Cards as part of their Main Ability, his Main Ability restores Ki, and it also grants an fantastic +50% Blast Damage Buff for 60 Timer Counts, ensuring that it'll essentially be active for the remainder of Goku's time in the match.

The Ultimate Arts Card itself deals Massive Damage and a +15% Damage Received Debuff, which is absolutely diabolical because it also has a 30% chance to inflict Faint. If Goku is on the ropes, this Main Ability itself is can be enough to turn the tide of battle.

At the start of the match, Goku does one thing very well - Damage. Taking Damage, however, is a different story. Goku's base Defensive Stats are not fantastic, in fact they're lower than most top tier Son Family and Saiyan Fighters. His Sustained Damage Cut Buffs do help him survive somewhat, but they're not reliable.

His first only activates when an enemy dodges an attack of his, and it's only around for 10 Timer Counts. This is great in the moment, but doesn't do him any favors as a pivot.

To become a decent Defensive pivot, Goku needs to take enough damage to drop to 50% health and activate his Green card. This is a lot of set-up required to patch up his Defensive issues, and often he'll be dead far before he can get that far.

The ultimate issue SP Super Kaioken Goku has is his competition. He clearly competes directly with SP FP SSJ4 Goku GRN on the Saiyan and Son Family Teams, and unfortunately he comes up short.

Goku's Super Saiyan 4 counterpart has higher stats across the board, sans Health, and better scaling Damage. Super Kaioken Goku does have occasionally higher Damage and situationally better bulk, but admittedly this is not a favorable comparison.

SP Super Kaioken Goku GRN is a sidegrade, or a substitute, and right now there aren't any Teams whereon he is superior to the Full Power 2nd Anniversary Saiyan.

SP Super Kaioken Goku GRN is a welcome inclusion on Son Family and Saiyan Tag Teams, and seeing as they're interchangeable at this point, he fits just as well on both.

His mixed Arts cards, and his special Blast Card, let him meld well with other mixed Saiyan and Son Family Attackers like HE Shallot LGT in his God Form, SP Saiyan Saga Goku BLU, and the ever incredible Zenkai 7 SP Youth Goku YEL. Those latter two Fighters are fantastic Supporters for Goku, who really appreciates the added Offensive Support.

One interesting bit of internal synergy is Goku's Extra Card draw benefiting Kakarot Goku, who can never get enough of the green stuff. Additionally, if Kaioken Goku manages to faint a foe with his Ultimate, Kakarot is more than willing to finish the job with his enhanced Special Move.

This rather puzzling Team composition is what Legends' Developers envisioned as SP Pikkon RED's Team. Though this is not particularly viable at the moment because of death incarnate, SP Super Kaioken Goku GRN is a part of this set-up as its premier Green Fighter.

The Extra and Special Arts cards juggled between the two Otherworld Warriors makes for a difficult core to crack, especially when it's supported by EX Android #13 RED, who would be included on this Team whether he's fielded or not thanks to his Z Ability.

SP Omega Shenron RED is an interesting 3rd choice, as is SP Kakarot RED. The aforementioned EX Android #13 RED is a must on the Bench, and its remainder can be comprised of Red Buffers like SP SSJ3 Goku RED or SP Hyper Meta Rilldo RED.

For players looking for something nostalgic and different, SP SSJ2 Youth Gohan RED can fire off his full power Father-Son Kamehameha if his Super Kaioken father falls, and he can negate color disadvantage as well. Gohan fits astoundingly well on this Team.

Buffing Goku's primary mode of attack and his Health makes this Equip an instant inclusion on his builds as well as extra Damage to Hybrid Saiyans, currently one of the Top Teams in the game.

This is an essential Equip for Goku, providing him with a large Pure Blast Buff.

Even before SP SSJ3 Goku GRN received a Zenkai boost, there was no real reason to bring this unit in the core in most games. Now, he’s clearly the secondary choice on Son Family.