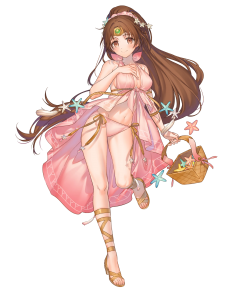 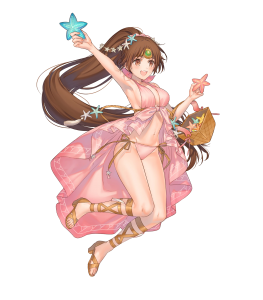 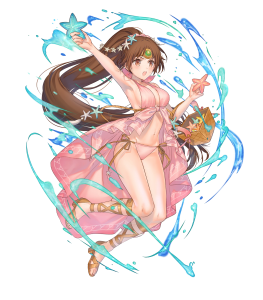 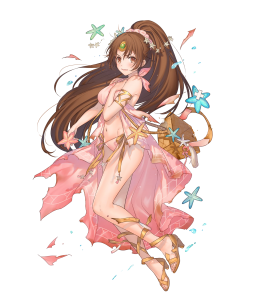 Passive A: AR-D Atk/Spd / Other Atk/Spd Boosting A Slots

Just wielding Daggers is quite the boon for Summer Linde. Access to Daggers such as Broadleaf Fan, Courtly Fan, Sky Maiougi, Cloud Maiougi, and Starfish allows Linde to be fine-tuned to effectively fill whatever niche players want her to.

The combination of the aforementioned strengths and Linde’s Cavalry status is what makes her viable in competitive content and potentially great in PvE content as well. 3 movement and access to Skills such as Lull Spd/Def significantly bolster Linde’s convenience, flexibility, and overall usability, especially in Aether Raids Defense.

Similar to her base self, Summer Linde is burdened with awful mixed bulk. She is prone to being OHKO’d by most physical units due to her abysmal 48 physical bulk, while she will rarely survive more than one magical attack (if she survives one at all) due to her low 58 magical bulk.

Summer Linde was never a particularly standout unit, and unfortunately, it has only gotten worse for her over the years. While Dagger Cavaliers are sparse, Linde nonetheless faces competition from those that have very similar statlines as her, including Summer Gunnthrá, Hostile Springs Elise, and Summer Ursula. The gap between Summer Linde and these units is arguably trivial, but that is not the case when comparing them to Summer Mia, who thoroughly outclasses them: stronger overall offenses, a powerful personal weapon in Summer Strikers, and her Harmonic status granting her a Harmonic Skill and the ability to activate the Duo’s Indulgence and Duo’s Hindrance structures in Aether Raids make Summer Mia a much stronger unit than any other Dagger Cavalier at the time of writing.

Arguably one of the best ways to use Summer Linde; in my opinion; is to run her as an anti-dragon brazen nuke because for the most part, dragons cannot touch her. The stats listed are for my +10 Summer Linde; with 4 dragonflowers.

The key part of this build is the Splashy Bucket, it is what gives Linde her ability to annihilate dragons. By nullifying adaptive damage and wrathful staff; Linde can safely initiate on almost any dragon in the game and come out on top.

Support skill doesn't really matter, but her default Ardent Sacrifice is perfect for dropping her into Brazen and Desperation range.

Iceberg is my personal preference, but Moonbow is just as viable for a fast-firing damage cancel. I prefer Iceberg, personally, as it gives her a much harder hitting nuke to hit the big bulky dragons with if she fails to one-round.

The other key part of this build is the twin Brazen Atk/Res. Nothing like +14 Attack and Resistance, giving Linde ridiculous safety when fighting mages or dragons of any kind or colour.

once she&#039;s 75% or lower, she will always double first and both attacks in a row. no matter the phase.

I was able to pull a second NY!Takumi (bad IV), so I was able to fodder him off to Linde. Although Starfish is good as well if you need a cheaper version of the build.

I currently do not have Reposition, so I am using Ardent Sacrifice in its place to help her lose HP to get into Desperation range much quicker.

Fury helps boost all her stats while also helping her get into Desperation range.

Atk and Spd Smoke help to weaken enemies even more so that her teammates have an easier picnic.

Ranged counter. idea is to get linde into vantage threshold and let starfish, vantage and brazen atk/spd handle the rest. Glimmer probably preferred over moonbow since ranged units tend to be squishy already. Hone cav support rather essential here, letting Linde reach 59 attack and 53 speed with a +spd boon and refine. Atk boon can be considered to help secure kills on the likes of halloween jakob.

Her IVs are +Res and -HP, and her weapon is Speed refined.

Pretty fun build for the Summer Linde I pulled. Since she's +Res, I decided to put Def ploy on her, since she gets up to 33 Res with her boon. Def ploy is great on her, since her attack isn't that high.

Fury is to improve her offensive stats and let her bait mages on enemy phase. Since she has an HP bane, she gets into her weapon's Desperation range after one attack.

Swordbreaker lets her double fast swords she normally wouldn't be able to. I put Moonbow on her just because of it's low cooldown, and it's good for her low attack.

Finally, Distant Def 3 is to help her tank mages on enemy phase. Overall, probably not the ideal or optimal build for her, but very fun!