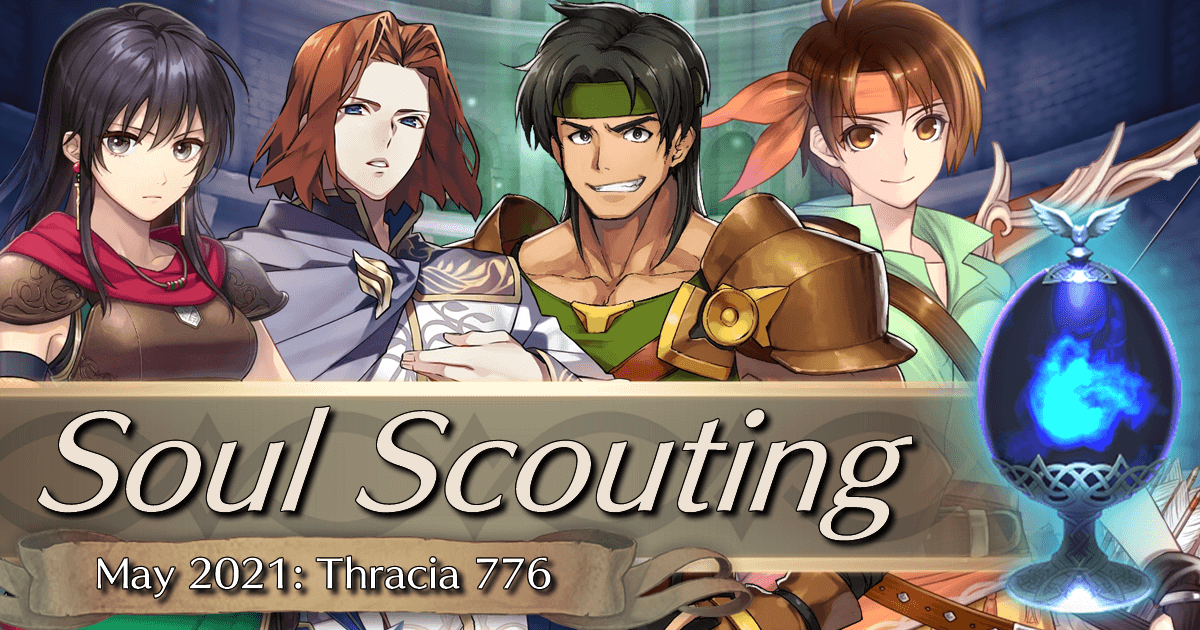 For this iteration of Hall of Forms, we have a decent spread of units from Thracia 776; notably, two of them are fourth-generation melee infantry units, which comes in their favor due to high base stat totals and access to fantastic exclusive skills. One of them is also a Grand Hero Battle unit, allowing potential choosers to avoid high Heroic Grail costs while grabbing high-quality skills. Players have the chance to build up and possibly add the following units to their roster permanently by spending a Forma Soul: 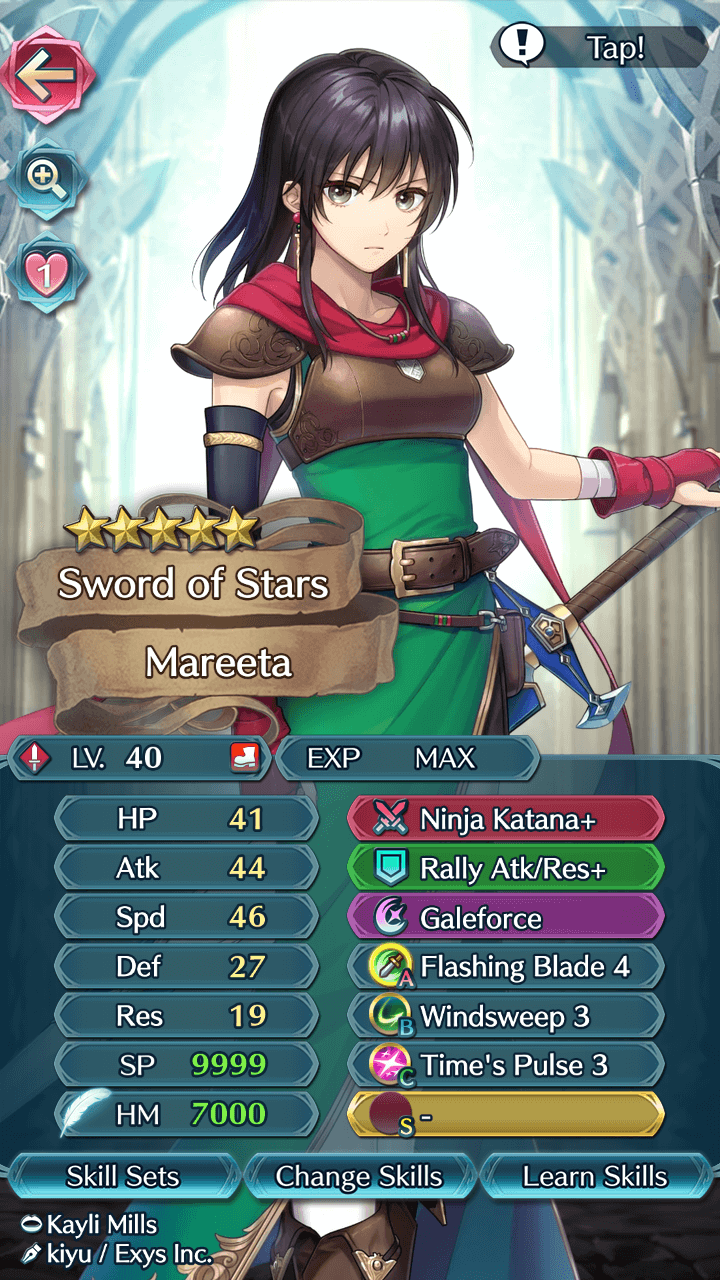 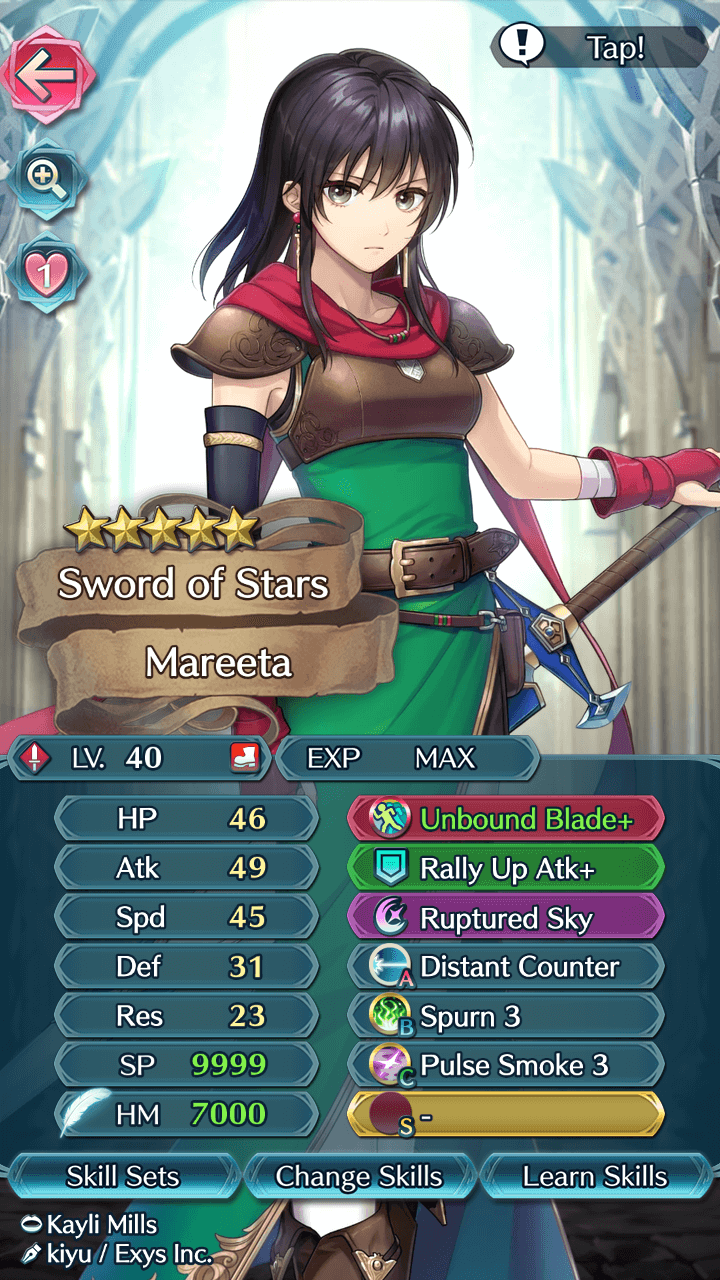 That infantry godsword build we all love and hate

At this moment of writing, Mareeta is very much still one of the best sword infantry units in the game thanks to Null Follow-Up being built into Mareeta’s Sword as well as a fantastic modern statline. However, there isn’t much Mareeta actually outright needs from the Forma skill pool as Mareeta’s Sword is absolutely essential to her playstyle — meaning that choosing an alternative weapon is mostly a wasted venture — and the rest of her base skills are already pretty good starting out.

With just a single copy of her, you're probably not going to diverge significantly from Mareeta's Blade, Close Call, and Atk/Spd Solo 3 for most forms of content. Grab Mareeta if you 1) absolutely want a copy, 2) care enough to give her Distant Counter (most other A-Passives are simply a small upgrade from Atk/Spd Solo), or 3) a particularly expensive C slot skill in the process.

Mareeta coming with Close Call, an already fantastic damage reduction option, means there's only one very, very small technical improvement you could get from there: Spurn, which trades the Hit and Run side effect for slight additional damage at lower health. Otherwise, Windsweep is a pretty legitimate permanent alternative; it works beautifully with built-in Null Follow-Up as always, granting Mareeta free uninterrupted attacks against axes, swords, lances, and beasts without fear of counterattack. For tanking builds, you're better off keeping the Dodge skills as Mareeta can consistently maximize the damage reduction effect out of those.

Mareeta's default Rouse Atk/Def is a solid but very replaceable C slot option; you can upgrade to Rouse Atk/Spd instead, or get Time's Pulse for an immediately-ready Ruptured Sky combined with Mareeta's Sword's CD -1. Joint Drive Atk or Spd are also pretty good as long as you remember that Mareeta performs optimally under Solo conditions thanks to her weapon — staying one space away is the play. Pulse Smoke is mostly Aether Raids-centric, though Infantry Pulse teams have taken such a nosedive in popularity enough to consider more general options. 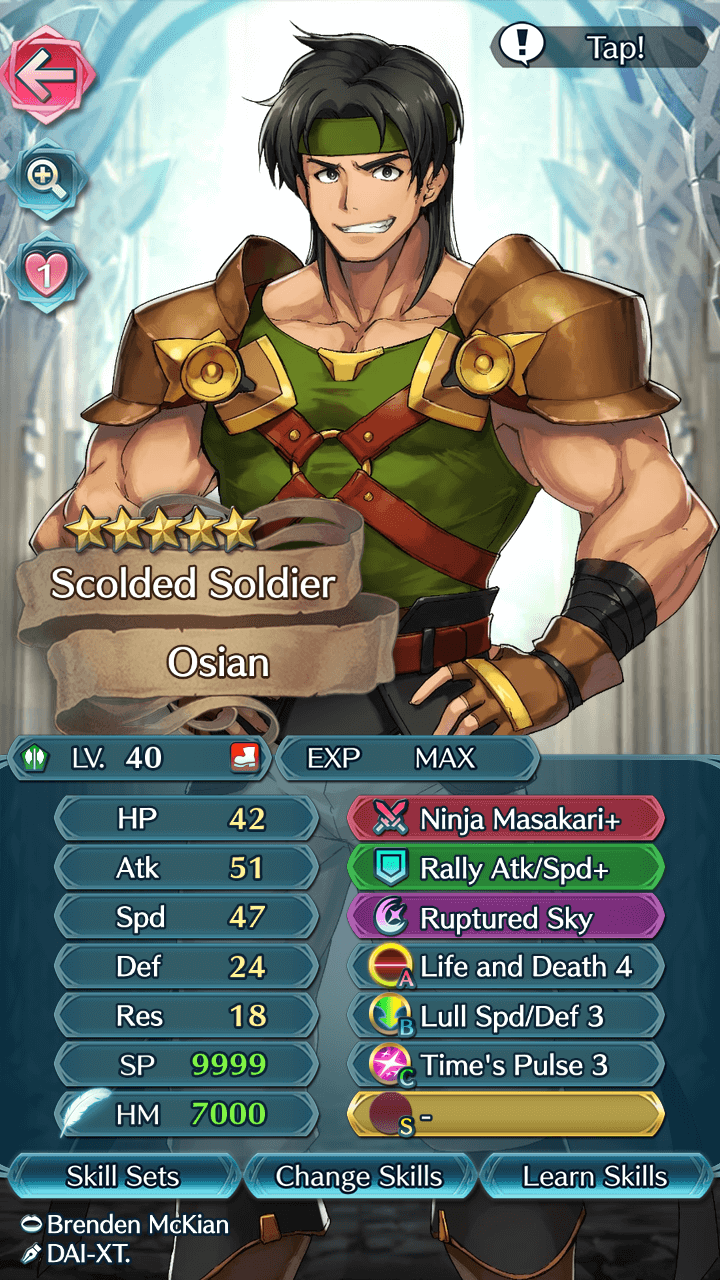 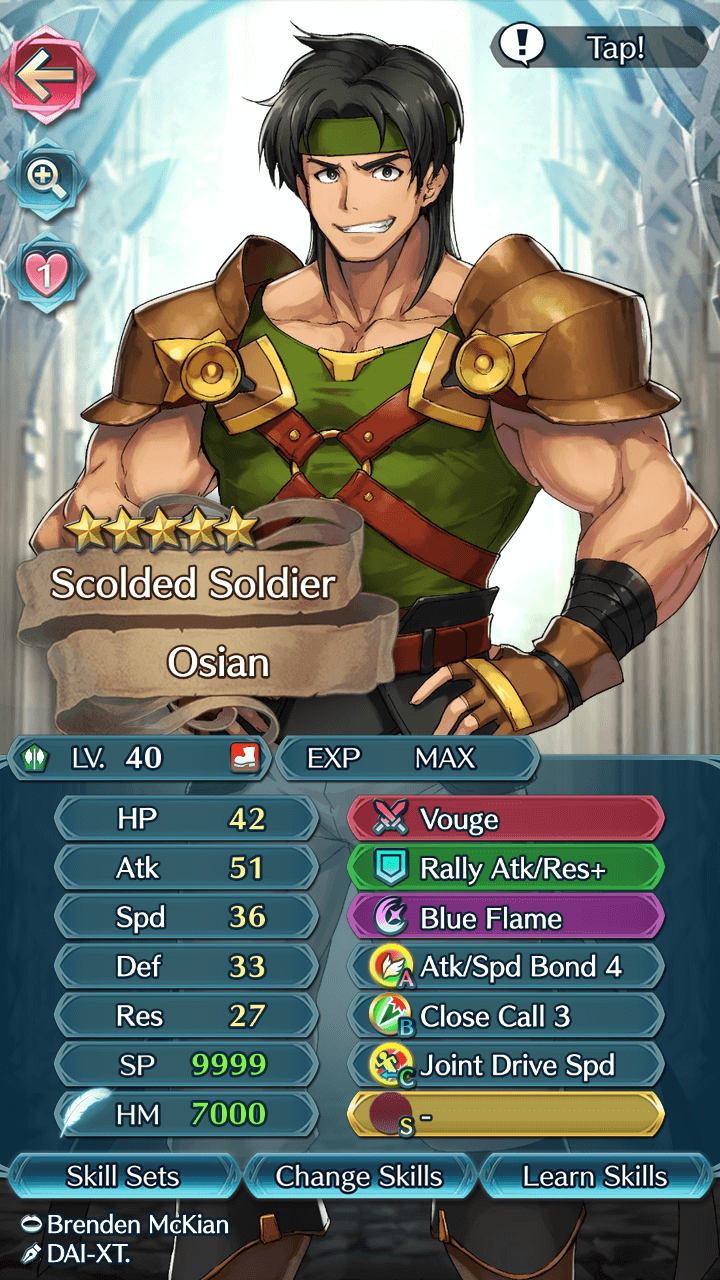 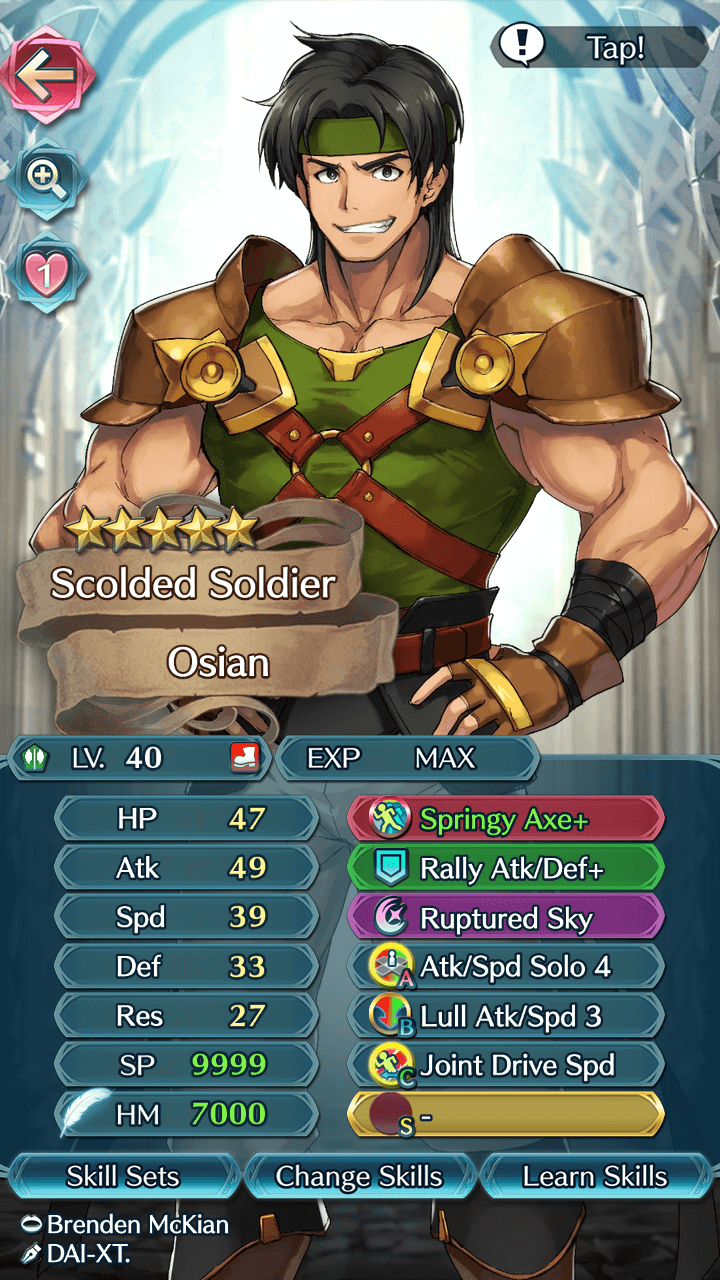 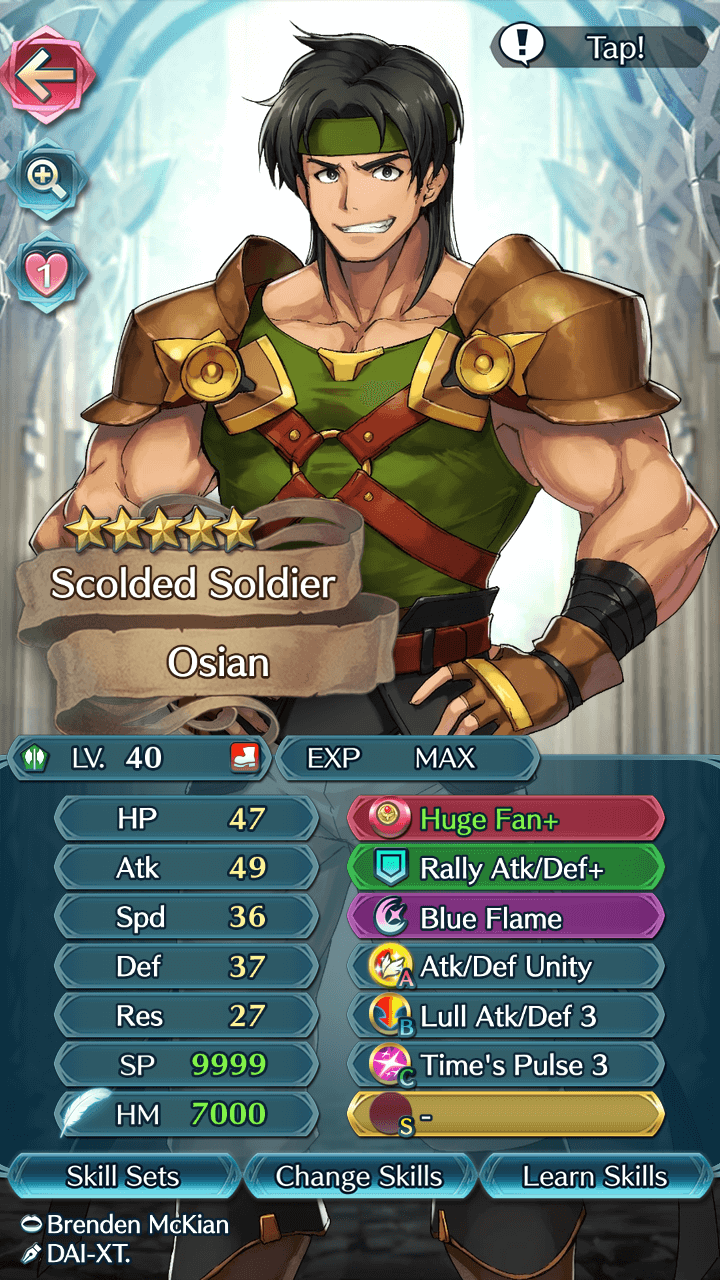 Osian doesn’t have the best base skills starting out. Vouge’s Distant Counter effect is not ideal being locked behind ≥50% HP (especially compared to the recent Distant Counter weapon refines that require no such condition), and the rest of his kit is generally so-so between a good but replaceable Stance, Wrath, and an Atk Wave. Thus, he gains a lot from the Forma skill pool but is still a hard unit to recommend a one-off copy of — Echidna and Ninja Hana generally make better mileage of most inheritable weapons while boasting better mergeability. Overall, probably the most nonessential buy of the bunch, though his great statline leaves room for flexibility if you really want him.

Vouge can be easily replaced with many other great axe weapons, especially hyper-offensive ones such as Firesweep and Ninja Masakari which work well with Osian’s 35/36 offenses. You can go all-in on this by obtaining any high-tier Atk/Spd A slot skill you can get, as well as a Lull skill that preferably involves Defense. Huge Fan, Springy Axe, and Plegian Axe are also pretty good general-use weapons that don't compromise Osian's enemy phase performance.

If intending to keep Vouge on a final build, Osian should run a Dodge skill to improve his overall tanking. To keep up with the Speed check effect of such skills, try to grab an A slot passive that boosts Atk/Spd in both phases — Atk/Spd Solo, Atk/Spd Bond, and Atk/Spd Ideal 4 are all nice recommendations here.

Time's Pulse is generally a great Special charging C option regardless of weapon. It enables a more readily-charged Ruptured Sky across all weapons while making Galeforce a more feasible Special for all non-Vouge options. For hyper offense builds, Joint Drive Atk or Spd improve his stats, while a Tempest skill of choice grants him some pretty intimidating attacking range on even or odd turns. 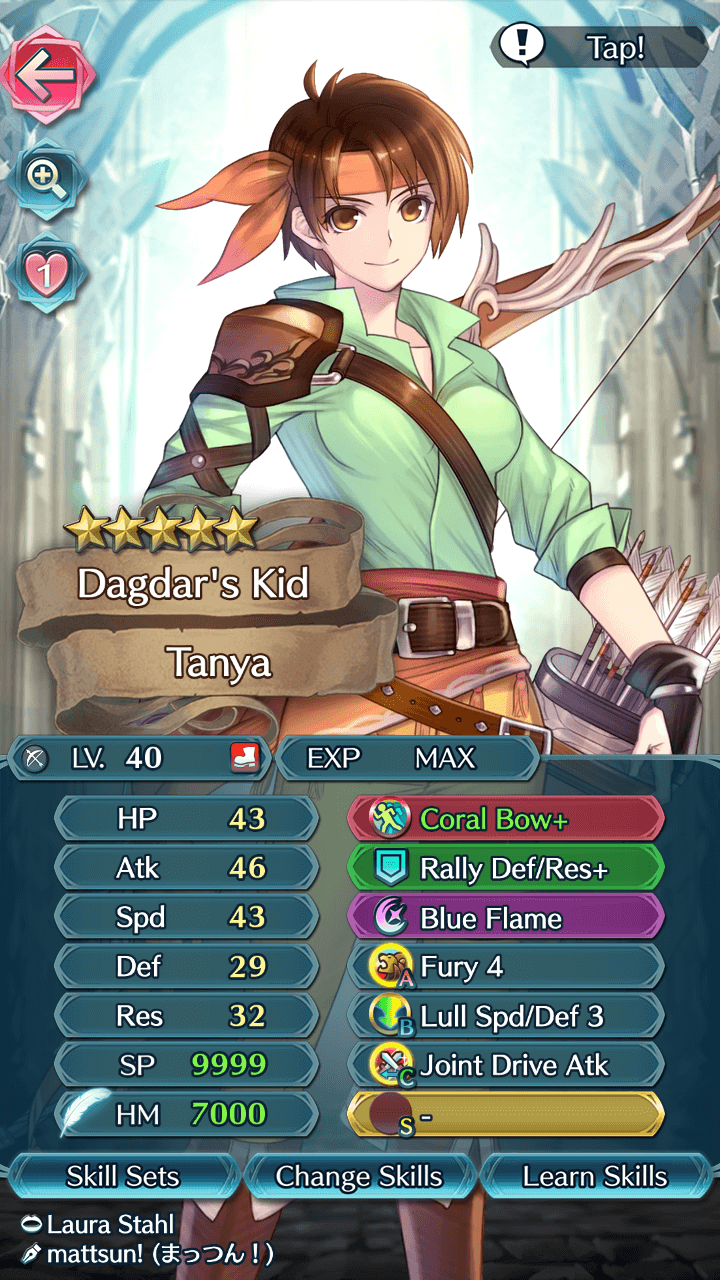 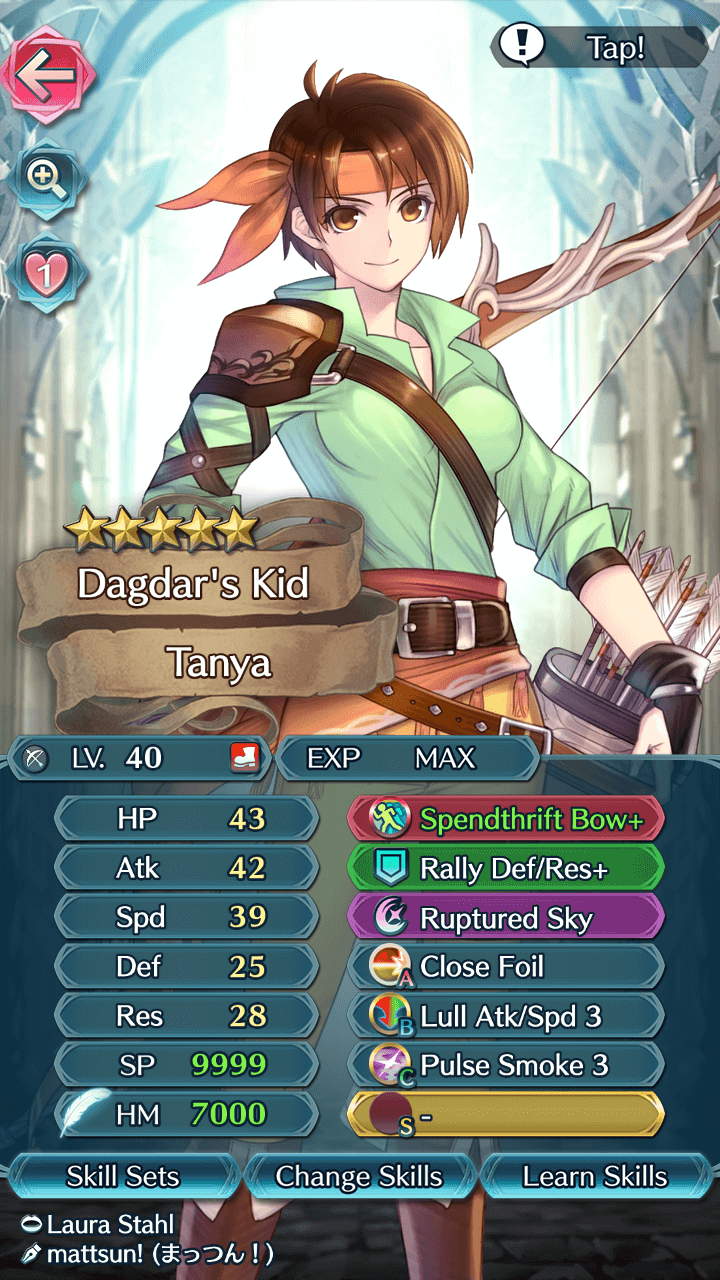 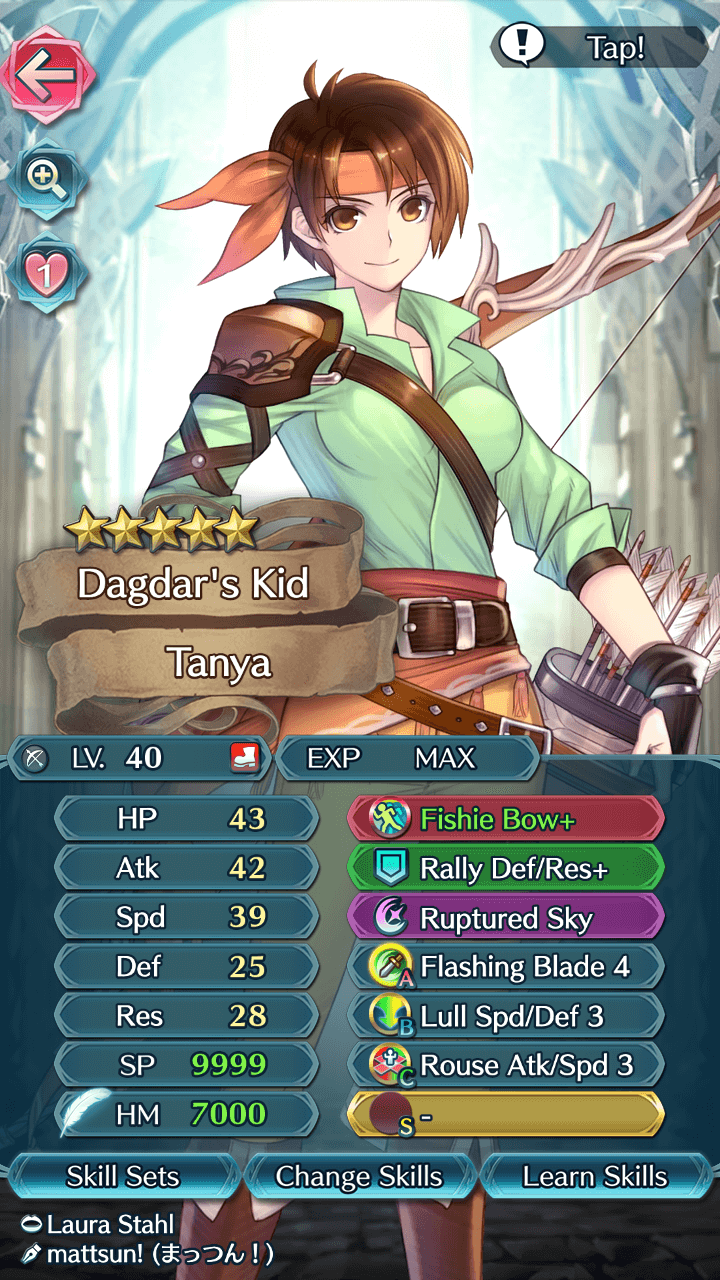 Fishie Bow freeing up the B Slot 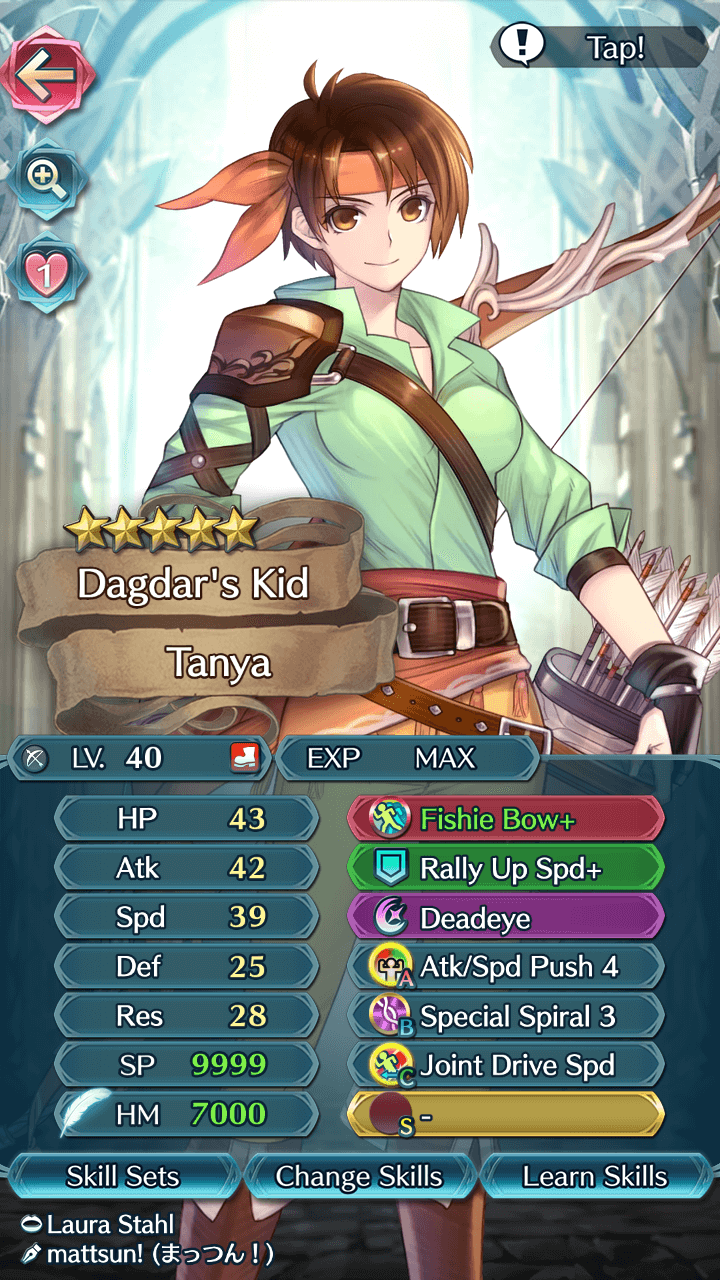 Tanya is a bit difficult to recommend spending a Forma Soul by virtue of Norne's very existence; her Archenean archenemy is available at the same low rarity as her and boasts a slightly more favorable stat total and distribution. If you're running the same bow tank build on both of them, Tanya takes magic approximately the same as Norne, but the difference of 6 Defense tends to land in Norne's court. Attempts at offensive builds are also somewhat challenged by more recent units, especially Young Innes whose Grail rarity and Frelian Bow is a tough nut to crack.

Even if you do spend the Soul on her, there's a slight resource issue: you can pretty much summon a normal Tanya copy at anytime and wait for ideal Assets and Flaws to pop up, rather than needing to use Trait Fruits on a locked neutral copy. If you're badly in need of a high-investment bow unit for general offense or tanking, however, she's not the worst choice here.

On the bright side, merges are fairly easy to come by after you get your initial Tanya copy, and there's a good chance you may not have to sacrifice good and rare units like Midori and Legendary Chrom to optimize Tanya during this Hall of Forms, unlike Norne.

With Tanya's very lacking base kit, she's basically starting out at zero and thus makes pretty flexible use of the Forma skill pool. There's simply too many great inheritable holiday bows and offensively-attuned passive skills to recommend. Narrow down your desired builds and necessary skills as needed.

Fortunately, there's quite a handful of inheritable bows with large Atk/Spd stat swings; you'll want to aim for Springy Bow, Coral Bow, and Helm Bow in this department. Fishie Bow is an interesting option too; Desperation being built in frees up Tanya's B slot and opens quite a lot of potent A and B passive combinations, including Flashing Blade + Lull Spd/Def and most Atk/Spd A slots with Special Spiral or Null Follow-Up. For more optimized Special spammage, Time's Pulse optimizes Blue Flame and Luna on certain builds. Joint Drive Atk or Spd or Rouse Atk/Spd do just as well for general-use offensive C slot options.

You can also run the tried-and-true bulky omnitank bow build of Spendthrift Bow or Plegian Bow with a Lull Atk/X skill and Pulse Smoke. Given Tanya's unamazing base bulk, though, be prepared to give her other ultimate forms of investment such as max merges and Dragonflowers to close the performance gap between her and Norne. With outsourced defensive support from allies, you can also go for Null C-Disrupt or Null Follow-Up over a Lull Atk/X skill to specialize Tanya against certain Aether Raids threats. 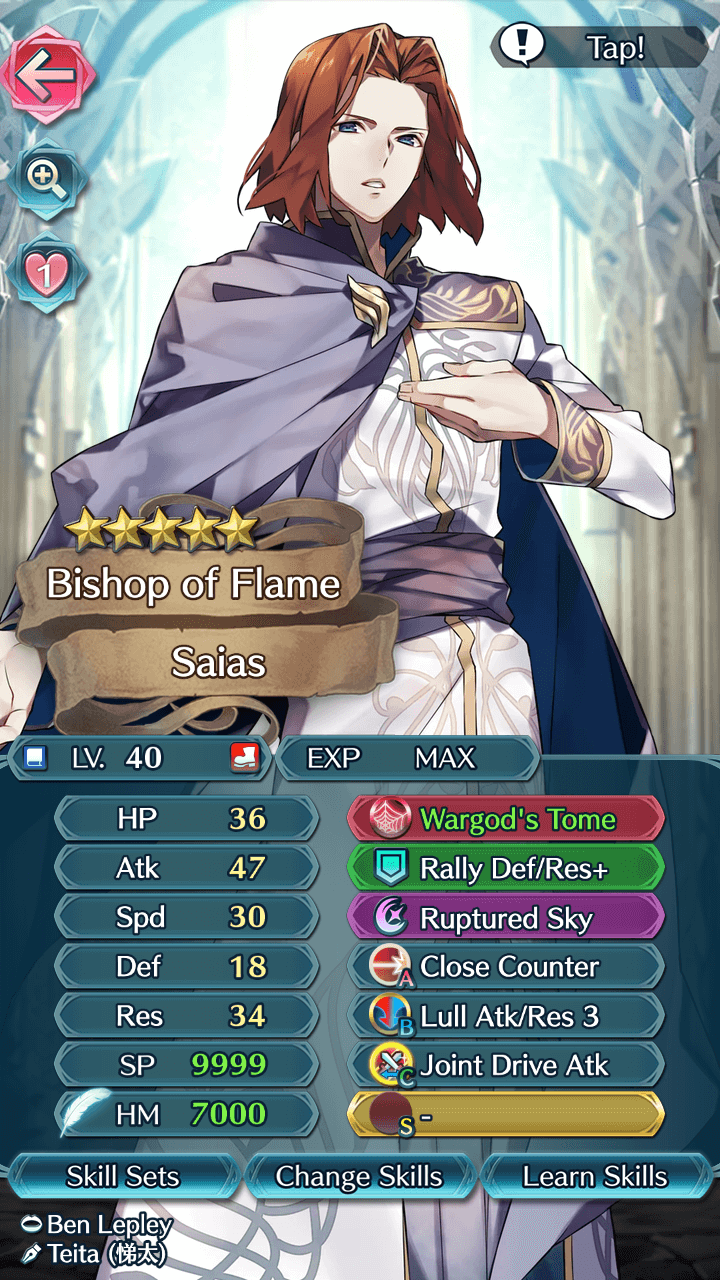 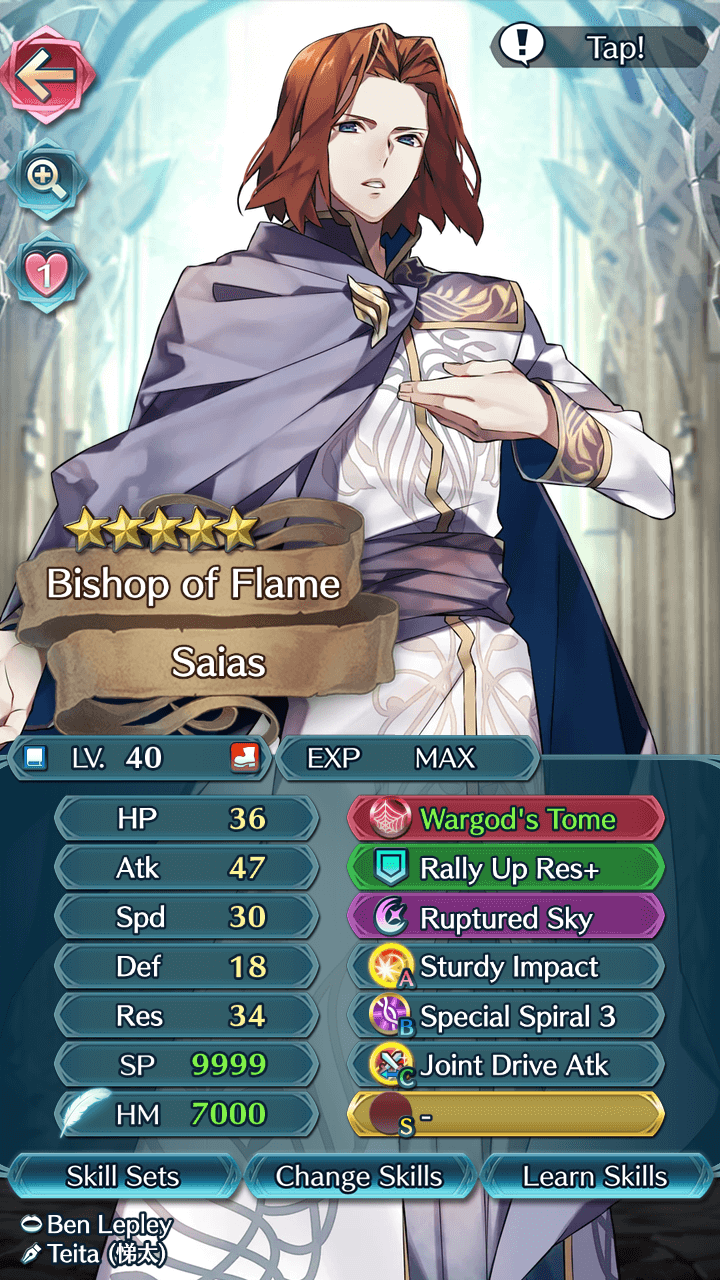 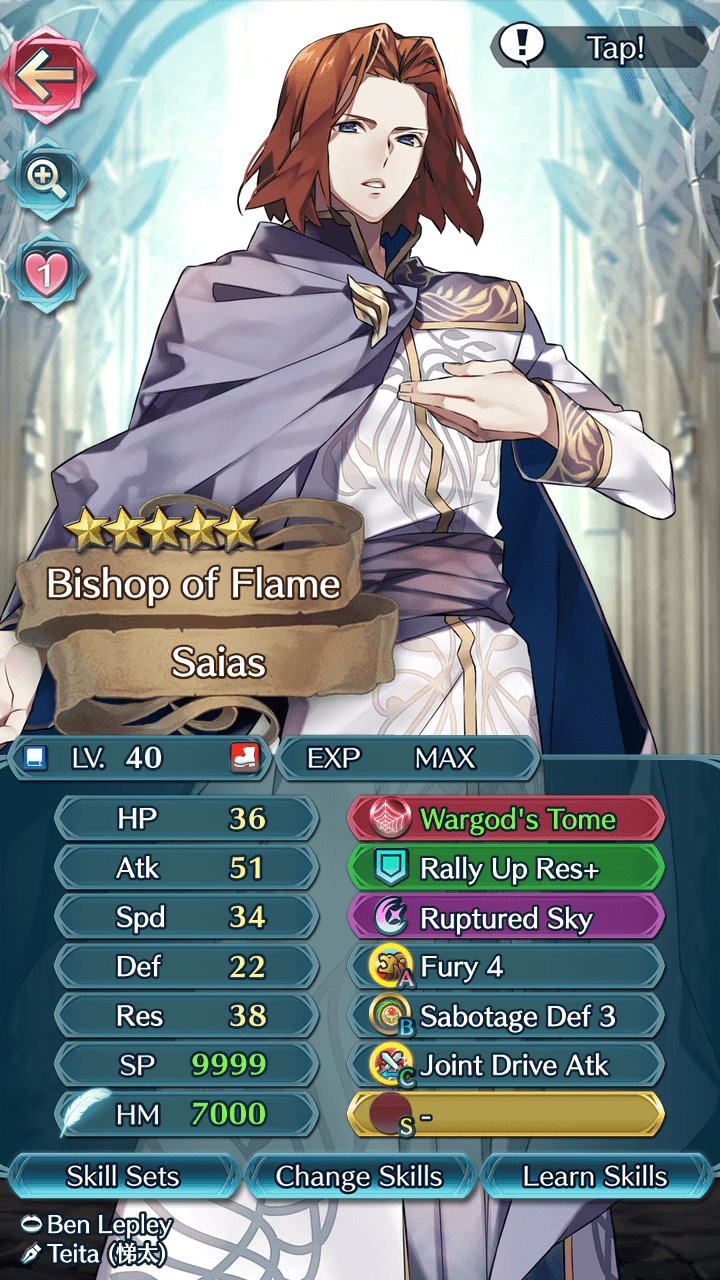 Saias is a unit normally obtained from his (now-effectively closed) Grand Hero Battles, so by building him and using a Forma Soul, you can save up on a lot of currency costs, including Divine Dew, high-investment skill inheritance, and Heroic Grails (if you plan on merging him fully). Like Tanya, Saias also has the element of easy merging on his side, and every copy you get will have neutral IVs, making Trait Fruit an inevitable tax of maxing out Saias anyway. Unlike Sabotage skills, Wargod's Tome merely requires Saias to be positioned three columns or rows from his enemy, making Saias a unique and reliable debuffer unit.

You'll want to focus mainly on his A-slot skill as his typical builds are heavily dependent on it — Close Counter/Foil gives rise to the classic Broadleaf + Close skill + Vantage strategy, while an Atk/Spd or Atk/Res swing skill of your choosing helps him be generally more competent in attacking sets. He's fortunately not particularly picky about the rest of his skills outside of Joint Drive Atk, which is the only C slot option that pushes his one-shotting potential further during combat.

Getting Spd/Def Ruse is also a solid choice as it completes the array of debuffs that Saias already applies with his PRF weapon. Good alternatives for this include Sabotage Def, Sabotage Spd, or Chill Spd/Def. Note that these debuffs can be provided by other allies and Saias typically prefers low-rarity B passives like Vantage, making his B slot mostly insignificant compared to the other slots. For a more penultimate offensive option, Special Spiral pairs well with Ruptured Sky for a readied Special trigger every initiation after Saias's first.

If this Saias is your first copy, get Wargod's Tome with its effect refine to save up on Divine Dew costs. Pact Blooms is technically pretty optimal if you've already refined Wargod's Tome or feel the need to switch from Broadleaf-style sweeping to general tanking. Conveniently, it also saves your Valentines Veronica a trip to the fodder barn.