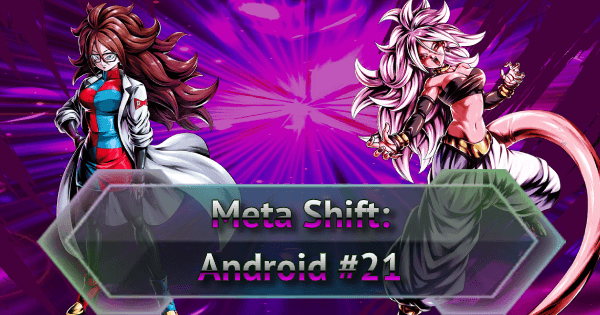 It’s that time of the year again, Female Warriors getting released left and right in Valentine’s period. This time it’s more unique, since Dragon Ball Legends made a collab with Dragon Ball FighterZ which resulted in Android 21 being brought to the game in two forms, her base one which is f2p and her Majin on which is obtainable from the new Step Up Banner.

However, the most surprising thing is that once again there is no new LF in the Step-Up Banner, which is a good sign considering how loaded the 1% units’ pool is this time -- With SP FP Boujack PUR, SP SSJ Youth Gohan YEL and SP Majin #21 PUR being the best ones ---.

It should be needless to say how impactful a Health Z-Ability is for Regeneration, but here we are. Honestly, probably not many in the community expected such Z-Ability to be released for the Tag at this point, because its Fighters’ Healing capabilities are incredibly consistent and high, thus any increase of Health makes those even scarier.

Not only that, but SP Majin #21 PUR is disgustingly strong Fighter that makes an already top tier Team even stronger practically. She’s basically an Offensive heavyweight that considerably increases the Team’s pace thanks to her low sub count. To quantify her impact, she feels like if SP Hit YEL were to have a Team, but with much better Defense of course.

Regeneration is now almost inarguably the best Team in the Game.

Who would’ve thought that Androids could be come so much better all of a sudden. Yes, SP Majin #21 PUR completely changes the Team for the better. Basically, Fighters like SP Perfect Cell YEL, SP Android #14 GRN and SP Fused #13 RED were Strike focused Fighter stuck on a Blast focused Team prior to this update and now they can finally perform in the best setup possible for them.

This also indirectly means that units like SP Android #17 PUR, SP Super #17 GRN and SP Android #13 BLU  become much less important for the Team, but it’s a loss that generates no regrets. In fact, the Strike Focused Team can play at a high pace and deal great Damage right off the bat, with SP Android #21 BLU being the cherry on top since she works so well with her Majin counterpart.

All in all, this change of style makes Androids so good they’ve became one of the best Teams in the game already.

While Regeneration and Androids can be enthusiast about the update, the same can’t be said for Female Warriors. The Team only had two Fighters that could be relevant in the current meta --namely SP Ribrianne BLU and SP Kakunsa PUR -- and the two new Fighters have the same colors as them.

Not only that, but their Z-Abilities don’t even synergize with the Team for the most part. So, what could’ve been an homerun for the Tag turns out to be a disastrous disappointment.

This Banner is seriously so good. While SP Majin #21 PUR could already make this Banner worthy enough for your precious Chrono Crystals, SP FP Boujack PUR - SP SSJ Youth Gohan YEL - SP Angry Goku BLU being featured make this Step-Up arguably the best ever released. If you have a good Androids/Regen basis or you want to make a great Sagas Warriors Team, pull here with no regrets.