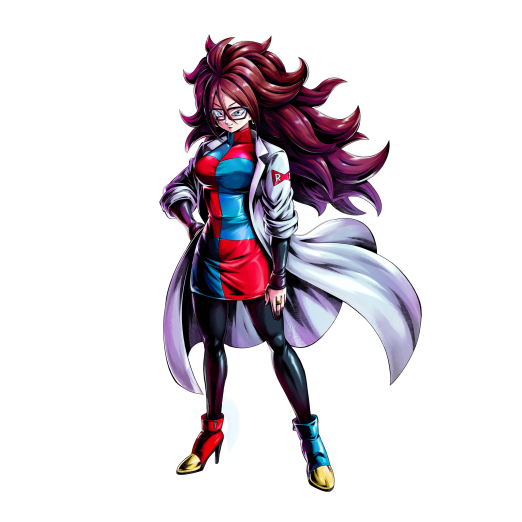 SP Android 21 BLU has received her Zenkai Awakening which has made her incredibly relevant in the current PvP Meta, reminiscent of SP Kid Goku YEL when he received his Zenkai Awakening. She excels in support her teammates and can deal good Damage with her debuffs.

Not only does she have excellent versatility with her Z-Ability and Tags, but she also acts as a check to common Defensive strategies that rely on Health Regeneration and Sustained Damage Cut.

Her partnership with Zenkai 7 SP Android 18 YEL makes her even more relevant as she is one of the strongest Fighters in the game.

SP Android 21 BLU is one of the most versatile support Fighters in the game. She supports a total of four(4) Tags with varying effects.

Because Fighters that share multiple Tags receive all applicable Buffs, Fighters like Zenkai 7 SP Android 18 YEL and SP Android 21(Good) GRN become horrifying killers capable of crushing entire teams by themselves. This versatility makes her one of the best supports in the game, only rivaled by SP SSB Vegeta PUR and SP Vados GRN.

Every time Android 21 uses either a Strike or Blast Arts, she applies -20% Health restoration and 15% to Damage Received debuffs onto the enemy, effectively reducing their healing while simultaneously making them take more Damage.

She can also reduce the effectiveness of Fighters who reduce damage during cover by applying a -30% Sustained Damage cut debuff with her Main Ability.

SP Android 21 BLU continues to support her team even if she dies which is reminiscent of SP SSB Vegeta PUR. She heals her teammates by 20% and gives them the ability to nullify abnormal conditions(one time).

The best part about this ability is the fact that she grants your team 2 Dragon Balls effectively increasing your chances to get a Rising Rush before your opponent which can be clutch in certain situations.

Android 21’s ability to apply debuffs to the enemy is one of her main sources of Damage and Fighters that are immune to debuffs can wall her quite easily.

SP Android 21 BLU is the long-awaited BLU Fighter for the Androids Tag. Not only does she protect Android 18 but she also supports her as well which makes them a deadly combination in PvP. She also supports other members of the team which adds to her versatility as I mentioned before and she has allowed Androids to eclipse every other team in the game.

Similar to Androids and Female Warriors, SP Android 21 BLU is the primary BLU Fighter for the Regeneration tag and has helped them reach Z tier alongside Saiyans and Androids. She has incredible synergy with Zenkai 7 SP Demon King Piccolo as both of them have ways to increase the amount of Dragon Balls you possess which is oppressive.

She can provide an incredible +50% Ki Recovery Buff and 15% Damage Inflicted to the members of this Tag, which turns Offensive juggernauts like SP Perfect Form Cell RED or Zenkai 7 Demon King Piccolo into Combo fiends.

SP Android 21 BLU is the long-awaited BLU Fighter for the Androids Tag. Not only does she protect Android 18 but she also supports her as well which makes them a deadly combination in PvP. Her support for Androids is best paired up with SP Perfect Form Cell RED and SP Android 21(Good) GRN as both Fighters have access to draw Special Move Arts Cards.

Even though her support for Androids is kind-of lackluster, she’s still a very good Fighter for the tag and has made them eclipse every team in the game.

This is a quintessential Female Warrior Equip and it's at its best when equipped to SP Android #21 BLU. She not only gets a sizable Buff to her Health and Strike Attack, but also gets to double down on her advantage against Red Fighters by equipping this.

This Equip is incredible for #21, as she gets a lot of mileage out of all of her Offensive and Defensive Stats.

I will crush you!

#21’s great support was to be expected after her Zenkai boost, but she does a great job stalling for her teammates now due to her increased card draw speed. When killed, she provides a Team-wide heal and increases her Teams Dragon Ball count by 2.

Paired with someone like SP Demon King Piccolo YEL, their combined Dragon Ball manipulation can be completely game-changing. On Androids, she makes the infamous SP Android #18 YEL that much better, and gives her someone that can alleviate her weakness to Blue units. SP Perfect Cell RED appreciates the Special Move cost reduction and Damage increase as well.