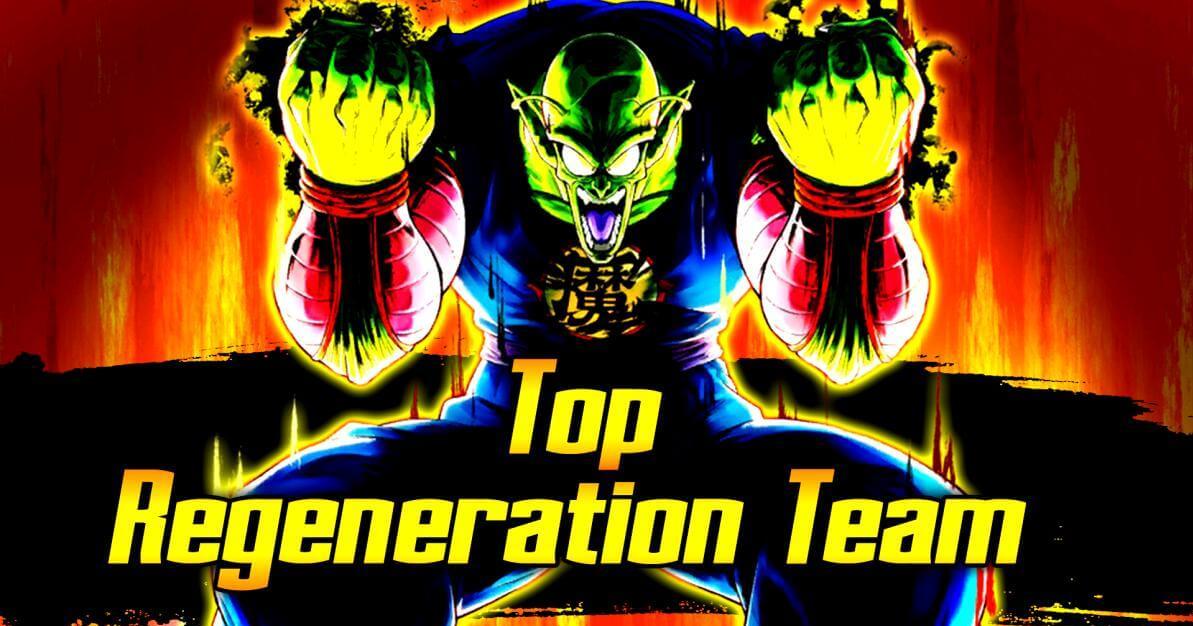 It's really tough to determine a clear strongest Core for Regeneration, as pretty much any combination of Fighters on this Team can work well. Just try to always keep either Majin Buu or Cell on the Core to have a reliable Defensive option, while the rest can rotate depending on the matchup.

Regeneration is a quite balanced Team, but it's still insufferably strong.

Overall, the Team's Offense flows quite well, also because SP Android #21 BLU can be put on the main trio to magnify her allies' strengths. "Can" is the keyword here though, as Regeneration is not one of those Teams that is in dire need of a Support to function, in fact the Team does just fine without 21, and her placement on the main trio should be reliant on the matchup.

Defensively, at least one between SP Majin Buu GRN and SP Perfect Cell RED  should always be used, preferably the former as he's more consistent throughout a whole match thanks to his constant heals, but Cell's capability to effectively prevent a Rising Rush during early Game is also extremely impactful and his Offensive value is way higher in late Game, so it's arguable in any case.

High Offense, high Defense, does Regeneration have any flaws? Just if you want to nitpick. In fact, its only real flaw is the lack of Fighters that can produce meaningful Offense right off the bat, a role SP Demon King Piccolo YEL covered amazingly in the past. It's true that the synergetic Offense on this Team still makes it at least decent in early Game, but overall Regeneration falls short compared to other Top Tier Teams in that regard.

However, that's almost insignificant in the big scheme of things, as Regeneration is one of the most balanced and versatile Teams in the Meta.

Finally, his son dethroned him, mainly because the Core is heavily Blast Based now. You can still use this variant of DKP, but keep in mind his Offensive value will be noticeably hindered by the Blast focused Deck. In any case, he'll be valuable to you even in unfavorable conditions thanks to his frightening Damage ceiling and Dragon Ball stealing capabilities.

His Offensive ceiling is pretty high, but he's much more fragile than SP Android #21 BLU, a Fighter that can also Support the rest of the Team and inflict decent Damage to her opponents. He's still a good and fun to use alternative option.

She's a stronger Offensive fighter than Majin Buu : Good, but she's also terribly weaker Defensively. Also, If you decide to use her, keep in mind that SP DK Piccolo YEL's Blast Damage isn't that good.

SP Fusion Zamasu PUR is a good Fighter, boasting very high overall Damage and nice Defensive tools, but SP Android #21 PUR is just as good if not better and has a better Z-Ability for the Team. Still, he's a decent Alternative option.

He's a fine replacement for Cell as he's a very Defensive Fighter that makes a really annoying couple with Majin Buu, as they can heal both themselves and their allies a lot. Other than that, his Offense isn't quite as good as Cell's, so he's just an alternative option.