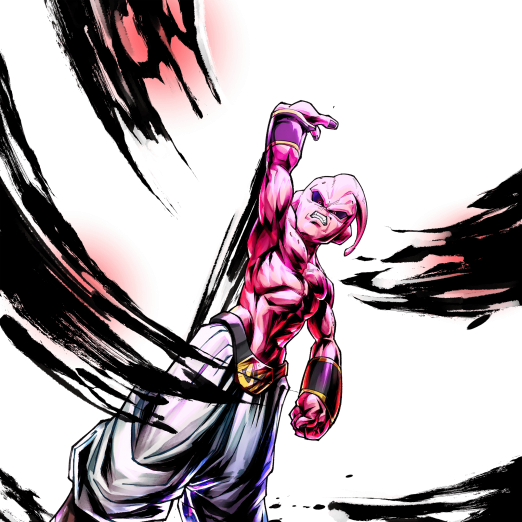 SP Buu: Kid RED has finally arrived and true to the anime, brings along as chaotic and destructive of a toolkit as one might imagine.

SP Buu: Kid RED draws an Extra Move the first 3 times he enters the battlefield. These reduce Enemy Ki by 30, but also increase his Damage inflicted. When used, there’s a chance for either a 15%, 30%, or 45% Damage inflicted Buff.

His Unique Abilities ensure he’ll be a force on both sides of the field, with Damage inflicted Buffs and Card Draw speed when he enters the battlefield, while taking 20% reduced Damage all the time. He also restores his 3% of his Health after every Arts landed, and all of his Strikes have a 30% chance to inflict Paralyze.

He won’t necessarily blow anyone away Offensively or Tank the strongest opposing Enemy, but he does many things that bring Regeneration back from the dead.

As previously mentioned, SP Buu: Kid RED will draw this the first 3 times he enters the battlefield.

His Extra Move is very effective not only for himself, but makes playing against him extremely frustrating as it reduces the opposing Ki by 30. Regardless if he doesn’t get the full 45% Damage inflicted Buff after using this, it’s still a very effective Extra Move.

In tandem with Buu's Arts Draw Speed Buffs and Inflicted Damage Buffs, his Damage potential can reach astoundingly high heights, but reaching those heights is dependent on luck.

He’s not necessarily a Tank, but is pretty difficult to deal with due to this Unique Ability. 20% reduced Damage taken as well as restoring 3% of his Health on every Arts Card landed on top of his respectable Defensive stats goes a long way in keeping him alive.

An easy to miss feature of this Fighter is the fact that all of his Strike Arts Cards have a 30% chance to inflict Paralyze, which is arguably a more effective status than Faint thanks to its consistency. The constant threat of this effect forces Buu's enemies to switch more often than they would otherwise.

SP Buu: Kid RED couldn’t do it all, his Blast Attack is absolutely abysmal even by average SP Rarity standards. His Damage inflicted Buffs which don’t discriminate do try to alleviate this, but he’s still very much geared towards Strike.

Alternatively, his Ki Restore Speed is surprisingly bad for a character in the anime that had so much stamina and energy in the anime.

Too Many Extra Moves

As powerful as his Extra Move is, it can be a huge issue constantly drawing these as it might not be optimal to have them in his hand at the moment.

Seeing as he’ll obviously be paired with Zenkai 1 SP Majin Buu: Good GRN who can also have problems at times with too many Extra Moves, this only exacerbates the problem.

SP Android #21: Evil PUR is an absurdly strong Fighter, and a great partner for Kid Buu. The Extra Arts Cards both of them draw could be seen as overwhelming, so if the two of them are to be used on the same Team, the third member of the composition must be able to cycle through those Arts Cards easily.

SP Super Baby 2 BLU accomplishes that with his Revenge Shot Extra Arts Card, which can chain into itself. Baby can Buff Kid Buu's Damage and increase his Healing, making him an overall stronger Fighter.

This has solid stats all around, making him more durable and increasing his preferred method of Attack.

A Melee Fighter that draws an Ultimate Arts Card should always be using this.

Also good for a one-dimensional Striker, but Fused with Kami is a nice all-around Offensive choice.

He was never great to begin with, and he's been replaced on Regeneration 3 times now. With best theoretical teams taken into account, he's lost his spot anywhere and is only good for his Z-Ability.