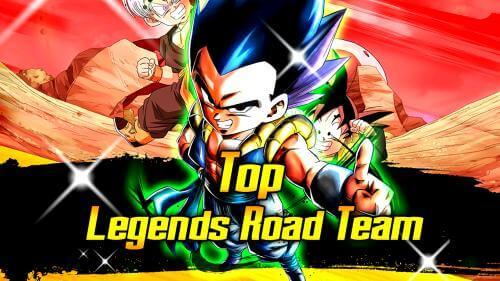 Around the 2nd Anniversary it really looked like Legends Road had the potential to become one of the most unbearable Teams in the Meta since it could benefit from Z/S Tier Fighters such as Trunks and Kid Goku, but almost a year later the outlook is completely different.

Since then, the Team only got two new Zenkai Fighters: Gotenks and Piccolo, and neither of them was particularly impactful. So, moving forward the Team probably will be a decent F2P option, and nothing more.

To go more in-depth, the Team is a mix of average-above average Fighters that perform nicely together, especially thanks to SP Fused with Kami Piccolo YEL who provides massive Damage Buffs for all his allies. Trunks and Gotenks make a synergetic Strike Based Offensive duo, although some of Gotenks' Damage Buffs disappear after 60 timer counts. This means Trunks is definitely the Fighter you want to stay alive the longest on the Team as he actually gets stronger as the Match goes on. Having only one great Last Man Standing is a limit for the Team, as opponents basically only need to take Trunks out first to have a very high chance at winning the matchup.

Another weakness for Legends Road is its color wheel, it only covers three colors, and the missing ones ( Red and Purple ) happen to be much needed in the current Meta ( #18 YEL is the most threatening Offensive Fighter in the Game, and Buu/#17 are terrifying Green Defensive options to face if you lack a Purple.