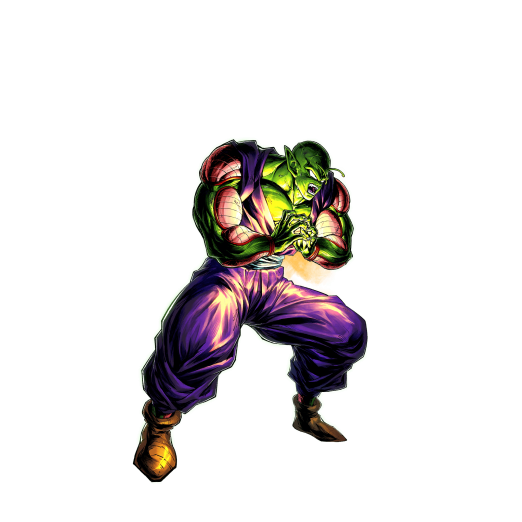 After struggling to be useful on the field due to him lacking enough power to compete with his enemies, Piccolo strikes back after fusing with Kami, ready to help his allies thanks to his all new capabilities.

Different from his canonical version, SP Kami Piccolo YEL isn’t an explosive Fighter that aims to destroy his opponents by himself, but rather he’s a Supportive Fighter that can Boost his Teammates in multiple ways.

What limits him at the moment is his lack of playable Team. Regeneration would be a great fit for him if he didn’t have the same color as SP Perfect Cell YEL, so as of right now he’s in “standby”, waiting for newer releases that will make him more relevant.

When alive, SP Kami Piccolo YEL greatly improves his Teammates by both increasing their Damage and healing them through his “Namekian Willpower”. In particular, his Unique Ability works best when affecting Regeneration and Legends Road Fighters.

His Main Ability is fantastic, since it both boosts his allies’ Damage and increases Damage taken by all enemies, amounting to an astounding 65% Damage Boost that lasts 20 timer counts for all allied Fighters. Also, it cancels enemy’s Attribute Upgrades, which can be incredibly useful in certain situations.

SP Kami Piccolo YEL is kind of disappointing on the field. He has no Ki cost reduction on any card unlike most other Supports, and he has neither Damage Boosting Abilities -- excluding his Main -- nor Damage Reduction ones. This makes him quite clunky to use in battle.

He has the same color as SP Perfect Cell YEL, so the doors are currently closed for him in the optimal Regeneration Team. He’s the best Fighter for a Legends Road Team, however it’s an uncompetitive option since most Fighters in that setup are bad.

He’s not the best Yellow option for the Team, and his Z-Ability is kinda bad. Once Regeneration gets another Fighter that can carry the Team, SP Kami Piccolo YEL’s toolkit might fit better than SP Perfect Cell YEL on the Team, but this is hypothetical.

SP Kami Piccolo YEL is a fantastic Support for this Tag. If only there were decent Fighter to Buff on this Team...

SP Kami Piccolo YEL suffers from a very low Health stat, and needs the durability to continually pass on his Support qualities.

A good choice for a one dimensional Support Fighter like him that primarily deals Blast Damage.

This is one of the better Offensive choices he has that can attempt to rectify his subpar Damage output. The real battle begins now. is the best purely Defensive choice, whereas something like It's Over! gives a little bit of both.

SP Kami Piccolo YEL is a decent, but very flawed Fighter. His Color ensures he’ll likely never see core play, his extremely low base Health ensures he’ll not be relied on to take any Damage, and his Team-wide Buff when killed doesn't last for the rest of the Match.