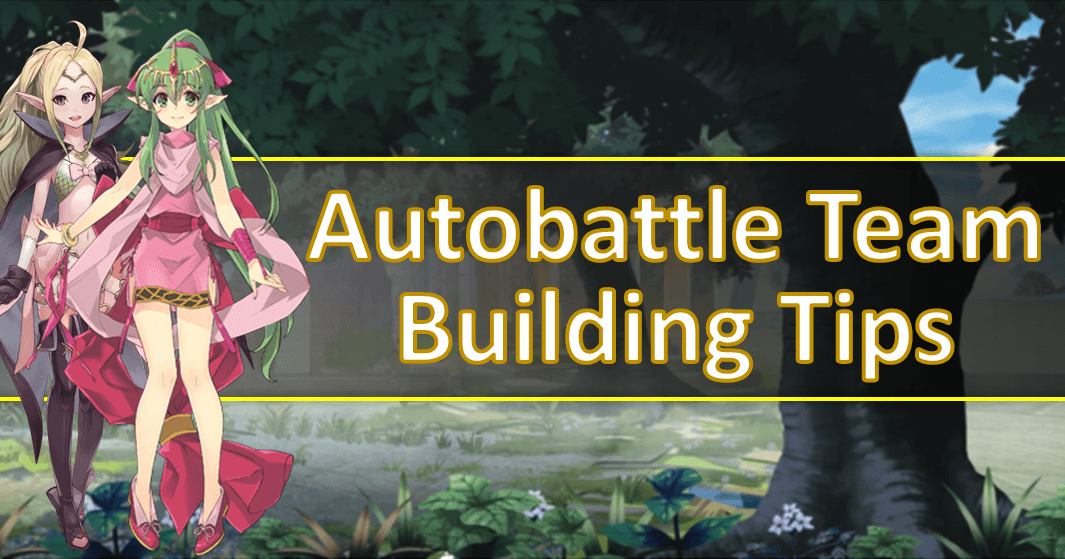 Let’s face it: farming score in modes like the Tempest Trials and Forging Bonds can be tedious and to those without a lot of free time, manually achieving 50k points/3500 bond can be downright impossible without autobattling. Unfortunately, with the rise of terrifying units like Fallen F!Corrin or Mareeta, it can be harder and harder to devise a clean autobattle team.

Therefore, the purpose of this article is to give resourceful summoners a few tips and tricks when it comes down to playing - or, not playing the game, as the case may be.

The most important part of autobattling is choosing who to take. What we’re looking for here are well rounded units who can take on a myriad of threats - even winning fights against their weapon triangle weakness.

For this, we generally need units with balanced statlines without any overwhelming weaknesses. That means that our beloved minmaxed units with 40 Defense and 17 Resistance are out. This also means that most flier units should be skipped as well, unless they’re running Iote’s Shield in their A or S slot.  Good examples of units with decent mixed bulk are Nah, Silque, Conrad, or Garon.

Running units like armors or cavaliers generally presents its own risk as well: cavaliers tend to utilize their full range of movement when on autobattle teams, which often means outstripping the rest of your team and rushing ahead to 1v5 and be defeated on the first map, while armors just take forever to get anything done because they don’t tend to group up and utilize skills like Armor March.

The first issue can be solved by running multiple cavaliers or running a good Galeforce build on units like Dimitri or Legendary Ephraim, but then, the lower Base Stat Total that cavaliers have works against you when trying to pick more balanced units to take with you. Plus, there’s always that one unit on the third or fourth map that just so happens to have Ridersbane or a Wolf tome or Armorsmasher that’s just specifically designed to ruin your day.

For this, we generally recommend choosing infantry or flier units (again, only with Iote’s Shield) to be your main general attackers.

With that out of the way, we need to look at combat capabilities. Again, we want our units to be able to win fights against as many units as possible, which generally means that Distant Counter/Close Counter builds are going to be optimal so that your units do not take excessive chip damage without retaliation.

Luckily, dragons are near-perfect for this, as most of them have balanced statlines and can inherit Lightning Breath to attack at any range, and their adaptive damage vs ranged units makes them very potent for sweeping autobattles.

Unluckily, with so many dragon killing units in the game nowadays, odds that you’ll run into an Exalted Chrom or Lucina are fairly high. Because of this, blue dragons such as Nowi or F!Corrin can help, with their Weapon Triangle advantage against Falchions pitting them in a better position to win those particular fights… though they’re dead if they ever happen across a Julia or Deirdre, so it’s a good idea to have your other generalist (you can generally run 2 fighters, with 1 support and 1 bonus unit) to cover their weaknesses: say, if you’re running Nowi, have her partner be someone like Legendary Ike or Winter Tharja so that they can support one another’s weaknesses.

When it comes to A slots, if you have Distant Counter/Close Counter in your unit’s weapon then you have your choice here. Obviously, Fury is a poor option due to it constantly sapping your health and skills like Life and Death aren’t ideal either due to them reducing your defenses. Player Phase skills like Swift Sparrow are also generally a bad idea since most of the time your unit will plunge into enemy territory and wind up fighting more units during the Enemy Phase. Therefore, skills like Close Def or Distant Def are good, and Solo skills (Def/Res Solo being the most optimal) are top of the line, since they’re active in both phases and your unit is likely to be acting alone anyway. Stance 3 skills are also good, particularly if not using armor units so that you can avoid getting hit by enemy Specials which will chunk down your unit’s HP.

For B slot skills, Renewal is an excellent option due to it activating at the beginning of every map, healing you for a guaranteed 10 HP per map. If using a recovery skill such as Noontime, then Wrath will help to get that skill off more urgently when you need it.

Special skills can be a mix. Galeforce is a potent option that allows your units to play hyper aggressively and try to eliminate as much of the map as possible before dying. This is fine for some playstyles, but generally does not last long due to your Galeforce unit outpacing your other units. Offensive Specials such as Moonbow and Glimmer work due to their consistency and help at taking down units such as Idunn, who are difficult to defeat without Special activations. Other options include Noontime for added healing, or even a skill like Sacred Cowl, which can increase bulk. If your unit has some kind of Special acceleration (such as Heavy Blade or Steady Breath) then Aether or even Miracle can be good options to stay alive.

Now, put all of this together and what do you have?

If you were lucky enough to roll her on one of her mythic banners, she is undoubtedly the best autobattle unit in the game with just her base kit. She has DC built into her weapon which negates dragon effective weapons, a Solo skill, a healing/damaging hybrid Special on a short cooldown, cooldown mitigation in her B and C slots, and is an infantry unit. Her Speed means that units like Mareeta and Byleth with Null Follow-Up won’t wall her off, and her mixed bulk means she generally won’t die in one hit which allows her to heal back up with Sirius.

Basically, if you use Sothis for inspiration for any of your autobattle builds, you’re generally on the right track.

As far as team support goes, you have the option of running healers and/or dancers. Healers are generally recommended, as dancers can either benefit or harm you, depending on the map. Like cavalry units, you can have an infantry unit rush out to initiate and then get danced, moving four squares away from any support and then facing a 1v5 - for this reason, dancers generally aren’t recommended.

Healers also tend to rush forward and be defeated unless their weapon is unequipped. This can be a benefit to you because with an unequipped weapon, the AI will generally make a mild effort to avoid being in enemy range unless you have an ally who needs healing there. This can help your healer to survive for longer periods of time, which in turn helps your main attackers to get healed more and live longer. The drawback to this of course is that when your attackers die, your healers have no way of completing the map and so it’s an auto-lose.

While cavaliers can be hit or miss as general attackers, they make fantastic healers due to their increased range allowing them to heal over more of the map. This is important because if a wounded ally is not within your healer’s range, your healer will make no effort to bridge the gap and actually heal them in the subsequent turn. This also makes Physic+ the best option for autobattle healing, despite its lesser heal value than a staff like Recover+.

Note that with an unequipped weapon, you’re automatically losing 6 HP off of your heal since healing effectiveness scales with your healer’s Attack.  Due to this, it’s worthwhile to try and select a healer with higher Attack, such as Maribelle and Genny so that your heal can be at least 17-18 HP. Adding Attack + 3 to their A and S slots can also help to increase their heal value by 3.

Just like with generalists, having mixed stats for healers is also a good idea so that they aren't defeated in their first engagement if they happen to be caught out in enemy territory. Miracle is also a good option for this, and Live to Serve in the B slot can help them to recover if and when they do get attacked by an opponent.

Their C can run a buff, such as Drive Atk or another Drive skill, which allows for flexibility in positioning that your units will need. You can also consider running a Tactic here if your team allows for it.

Unsurprisingly, all of this means that Brave Veronica is among the best choices for an autobattle healer. She has cavalier range, decent Attack, high Speed to avoid being doubled, and moderate mixed bulk to avoid being oneshot by anyone who manages to catch her.

Despite generally being a riskier pick, dancers can be of great benefit, especially if those dancers can, say, move 3 spaces and also heal your units passively.

Herons (Reyson and Leanne) are the best options for dancing, particularly when paired with dragons. Of the two, Reyson has the more balanced defensive stats, but Leanne is colorless, meaning that it will be less likely for her to go up against a unit she has weapon triangle disadvantage against.

Unfortunately, using herons means that you need to keep their weapons equipped, since that’s what allows them to heal. This, plus their added range, can mean that they have a tendency of rushing in to their deaths. This can be mitigated somewhat with skills like Fort Def/Res 3, which reduces their Attack (making them less likely to initiate) while bulking up their defenses, but it’s never a guarantee that they’ll survive.

The only other dancer option worth mentioning is Ninian. As a dragon, she can also fight using Lightning Breath to support her allies and with her pitiful Attack stat, it’s less likely that she’ll engage on her own when she could dance instead. Ninian can also run skills like Ward Dragons, which is an improvement over Drive Def if you’re utilizing dragon units as your generalist attackers.

The bonus unit typically isn’t worth mentioning here. If you can fit them into one of the other archetypes (generalist, healer, etc), then you have an extra unit slot to work with and can push through autobattles very easily. If not, then it’s usually best to just build them as cheaply as you can and let them support your main units (utilizing drives and/or Tactics in their C and S slots can be a boon to you) while you battle your way through the score thresholds.