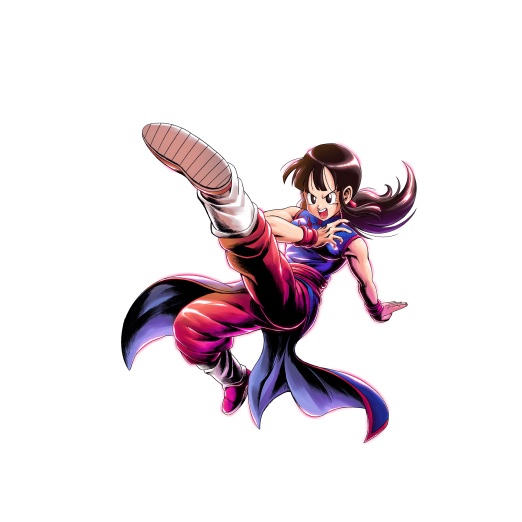 This variant of the universe's strongest wife is a killer Support Fighter for the Female Warrior Tag with some flexible combat utility to boot. Her kit is stellar when it comes to helping out her ladies with Healing and Inflicted Damage Buffs, plus her personal Buffs that activate depending on how many Timer Counts she's spent on the battlefield keep her relevant in combat and give her minor Crisis Utility.

Chi-Chi's Blast-oriented playstyle might not jive with the Female Warrior Tag's best and brightest, but her Support and conditionally high Damage output make her a solid option on Tag Teams.

Additionally, she can Heal all Allies' Health by 20% and instantly cure their Abnormal Conditions with he Main Ability - giving her additional utility in certain match-ups.

Chi-Chi's Blast Damage is no joke in ideal situations. She benefits from her permanent stacking Damage Buffs too, so switching her out frequently primes her for high-Damage Blast Arts Combos.

EX Chi-Chi PUR's Main Ability bestows upon her a +40% Blast Damage Buff and a -10 to Blast Arts Buff too, giving her some incredible burst Damage potential.

Chi-Chi gets some Buffs the longer she stays on the battlefield too - capping off with a massive +40% Inflicted Damage Buff when she's been out for 15 Counts. Normally she wouldn't stay out that long, but in Crisis scenarios, this Buff comes excels, giving her a fighting chance when no Allies are left to protect her.

The best Female Warriors are all Strike-oriented, which significantly curtails Chi-Chi's Team applications. She can still be used alongside those Fighters to great effect, but she'll lower their overall Combo Damage potential. Her Support Buffs make up for this somewhat, though.

EX Chi-Chi PUR essentially requires Allies able to tank hits, because she sure can't. The Female Warrior Tag's great equipment selection makes her Bulk passable, but she still won't be able to survive more than one Combo from the Meta's strongest Offensive Fighters.

This is EX Chi-Chi PUR's best Team, and she certainly makes an impact. Her Blast Damage-oriented style makes her an easy fit on Teams that use SP Rozie YEL, a Blast Damage master, and SP Android #18 RED, who is also a Supporter with marginally higher Blast Attack than Strike Attack.

The Tag's ultimate Fighter, SP Android #21: Evil PUR, works decently well with Chi-Chi, and the two of them can form a Purple Color Counter Team with the aforementioned SP Android #18 RED doubling down on Chi-Chi's Support utility.

EX Chi-Chi PUR's Buff to both Blast Attack and Defense with her Z-Ability ensures that she'll never be a Team liability, even if she's left off the main Core.

This Equip is ideal for all Extreme Purple Fighters, and EX Chi-Chi PUR is no exception. This equip is what salvages her poor bulk.

As she's a Blast-oriented Fighter, this Equip's pure Buff to Blast Attack really ramps up her Damage. Because this equip is notoriously difficult to get good Slot 3 Rolls for, It's Okay Now! can be used instead for players without a strong version of this Equip.

While she is more of a Blast-based Fighter, this Equip's Buff to Maximum Health is too great to pass up.

EX Chi-Chi PUR might be good in a vacuum, but her usefulness is undercut by her shared color with the undisputed best Female Warrior Fighter in the game, SP Android #21: Evil PUR, and her Blast-oriented playstyle which doesn't synergize with her main Tag's best Fighters.