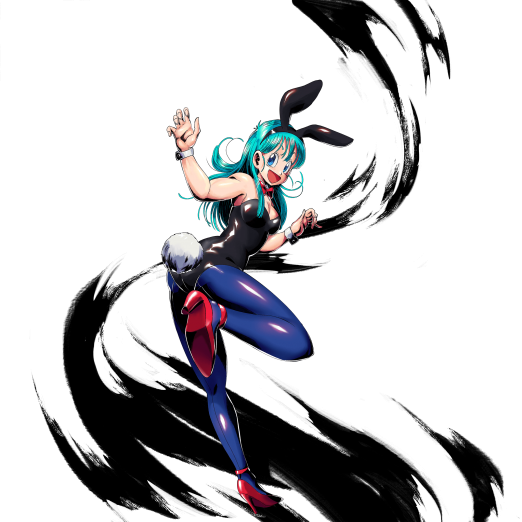 SP Bunny Girl Bulma GRN blasts onto the scene and brings with her a new Support Fighter formula. Her Abilities come into play at every stage of the match, even if she never hits the field. Simply being present gives her Team Arts Cost Reduction and Damage Buffs, and her Main Ability and Special Arts Card allows her to further enhance her teammates’ effectiveness.

The plucky inventor’s power extends beyond Support as well. Her Main Ability is absurdly powerful, providing a potent Crit Rate and Critical Damage Increase for all of her allies, as well as an Ultimate Arts Card that can deal surprisingly high Damage itself.

It’s not all sunshine and rainbows for this battlefield diva, as SP Bunny Girl Bulma GRN is held back by poor stats, strange symmetrical Buff effects from her Special Arts Card, and a number of RNG based self-Buff effects that, while strong, don’t amount to much given their questionable up-time.

SP Bunny Girl Bulma GRN’s Support Buffs to Damage Inflicted and Arts Cost Reduction are guaranteed to be active at all times while she’s alive, allowing her Teammates to perform well beyond their usual capabilities. Powerhouse Teammates like SP Ribrianne BLU, SP Kakunsa PUR, SP Rozie YEL, or SP Android #21 Evil PUR, who already have impressive Combos, are brought to the next level with Bulma’s Support.

Speaking of her Support, her Extra Arts Card provides additional Offensive Support, Buffing her Allies' Inflicted Damage by 20% for 20 Timer Counts and their Ki Recovery by 50% for half that time. The up-time of this Buff is also notable. Bunny Bulma can draw this Card 50% of the time whenever she activates a Special Move Arts Card, meaning her Team's Damage can be unrivaled with some good fortune.

Stronger than she looks!

SP Bunny Girl Bulma GRN’s Blast Attacks pack a punch. Her identity as a Support Fighter belies her decent Blast Damage output, which is further augmented by her Main Ability, which Buffs the Critical Rate and Critical Damage of all her Allies by 30% for 30 Timer Counts. Her Offenses are far from her main Tag's best, but they're notable enough to put her a tier above most Support Fighters Damage-wise.

Her Main Ability and its associated Ultimate Arts Card can deal Impressive Damage, especially if it Crits, since it ignores all Sustained Damage Cut Effects. Even if her target survives, they suffer 3 additional Substitution Counts if they manage to flee.

Bringing Something Special to the Party

A defining feature of SP Bunny Girl Bulma GRN’s kit is the Special Arts Card that she brings with her to combat. This aspect of her kit does not mean much to the Female Warrior Tag, but can be capitalized on in other fun Team builds that use her. Her Z Ability at 6 stars decreases Special Move cost as well, giving her additional utility.

Hanging with the Wrong Crowd

SP Bunny Girl Bulma GRN has few faults, but her main issue in combat stems from her sub-par Strike Damage output. Normally this wouldn’t be too notable, but the best Female Warrior damage dealers rely on Strike Cards. Bringing her along boosts her friends’ Damage output significantly, but her held Blast Card and her lack of personal Strike Offense do not compliment her Tag’s primarily Strike-based playstyle.

With no Teammates to Buff, SP Bunny Girl Bulma GRN lacks the ability to close out games. She’s no slouch in combat, but her Teammates will inevitably be able to function as Crisis fighters better than her. At the very least, as a Crisis Fighter she can rely on her Personal Damage Buffs and low Arts Cost, but her Defense is laughable.

SP Bunny Girl Bulma GRN has a number of self-Buffs on entrance that are strong on paper such as Damage Buffs, instant Ki Restoration, obtaining a Dragon Ball, but they are all dependent on chance. If her user is lucky, these Abilities can turn the tide of battle, but if not, she doesn't contribute as much as similarly tailored Supporters.

SP Ribrianne BLU is a fantastic Ally for the genius cheerleader, and can function fantastically even if SP Bunny Girl Bulma GRN falls in combat. The ultimate partner for SP Bunny Girl Bulma GRN is SP Android 18 RED, who is protected by Bulma and buffs her in kind. SP Android 18 RED’s Arts Cost discounts and Draw Speed Buffs allow for aggravatingly long Combos. The pair can stack Damage Buffs to a ludicrous degree, and can double the efficacy of the third member of their squad with their dual Buffing power. Another Supporter that benefits Bunny Bulma is SP Android #21 BLU, who appreciates Bulma's Buffs and reciprocates with her own.

SP Bunny Girl Bulma GRN is an incredible choice for a Dragon Ball saga Team. The Team can primarily focus on Female Warrior Synergy with characters from the Dragon Ball Saga, like SP Chichi GRN and SP Bulma BLU. It can benefit from powerful DB Saga Z Abilities as well as Female Warrior Z Abilities to pack a potent punch. Even EX Roshi PUR can be used, who gets a number of Buffs when a Female Warrior is deployed alongside him.

This Equip is key for all Female Warriors, and Bulma is no exception. Its myriad Buffs crank up Bulma's Blast Offense and supplements he Defenses.

For Blast-oriented Supporters on the Female Warrior Tag, this equip is second to none. The Pure Buff to Blast Attack it offers scales very well with the number of Blast Attack Buffers that inhabit the Tag.

For a Blast Fighter with Critical Utility like Bulma, this equip's Collection of Offensive Support and Defense go a long way.

SP Bulma GRN on the surface might seem like a good Support, but is a considerably flawed Fighter. It’s true that Support Fighters tend to not have great stats, but even then she still manages to fall short.

SP Mai GRN brings superior and much more consistent Support -- specifically her Ki restoration -- and has an infinitely better Health Z-Ability to boot, and as such should be used over her in the core or bench. Either way, neither one of them can take a hit at this point, and should be used with caution.