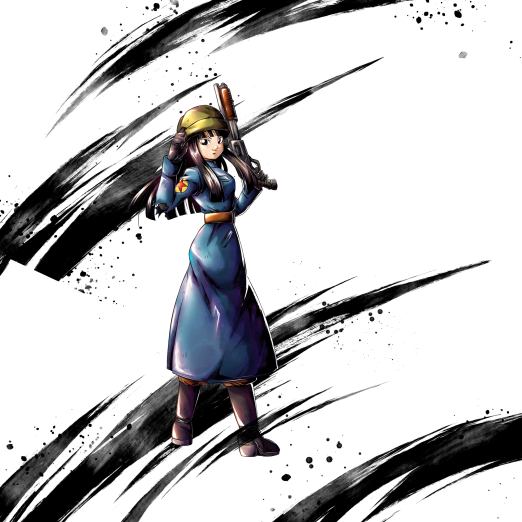 This Fighter, similarly to SP Mai GRN, can help the Team with some Supportive Unique Abilities. However, both of her PVP relevant Tags--Future and Female Warrior--have much better choices than her that can fill that role.

While her stats aren’t bad for an EX Fighter, she’s very fragile with Defense and low Health.

EX Mai PUR provides the Team with useful Buffs thanks to her Main and Unique Abilities. While these Buffs aren’t significantly powerful if taken singularly, they can add up to a 40% Damage Buff for the whole Team for a meaningful amount of timer counts, with an additional 20% to Strike Damage as well.

She’s an EX Fighter, so she needs many good equips to hold her own against SP Fighters in PVP. Thankfully, Her Female Warrior and Future Tags give her many equip choices.

EX Mai PUR won’t last long against SP Fighters, especially due to her atrociously low Health and Defense stats. Considering that her utility revolves around Team Buffs, the fact that she’s such a fragile Fighter makes her inviable for PVP in most situations.

There are already many decent Fighters that cover her role in both the Future and Female Warrior Tags. SP Mai GRN basically does the exact same things as her but better. This means that EX Mai PUR would only be used by Players who don’t have her SP variant.

She is limited in this Tag due to the presence of some much stronger Purple and Support Fighters such as SP SSJ2 Caulifla PUR, SP Youth Bulma BLU, and SP Mai GRN.

While she has seen some niche use, her weaknesses make the other choices much more preferable.

As with Female Warrior Teams, this Team has much better Support Fighters than her even if they lack Purple Fighters. This Tag is powerful, still a little small. That being said, it doesn’t strictly require the presence of a Support Fighter in its Team Builds.

Similar to her SP variant, EX Mai PUR is a Support Fighter that should be kept alive as long as possible. This Equip not only gives her a massive Health Boost but the Damage to back it up.

Due to the huge Boost this Equip gives, it's the mandatory choice here.

Keeping a Support like EX Mai PUR alive is imperative, and this Equip does just that.

While EX Mai PUR is one of the better EX Rarity Fighters toolkit wise, her off-putting Z-Ability makes her very difficult to use in the core and bench of the best possible Future and Female Warrior Teams due to their heavy emphasis on Strike Attack.

Q&A Shallot Gaining a Zenkai Awakened Special
Is it still possible for Shallot to learn the Zenkai Awakened Special of Red SSJ Goku…
Need help with team making
I’m not very good at team building so some help and guidance would be great, thanks. …
Has anybody received it
Hi I was wondering if dB legends actually sent rewards of 10K cc or any of the rewards…
Dragon Ball Legends Guild Code
Starting a new Guild in DRAGON BALL LEGENDS with all active members only allowed entry…
Need guidance to strengthen team, please assist!
Hi, Key players in my team are SS Vegita Green and Zenkai awakened Trunks. I need…
Read More